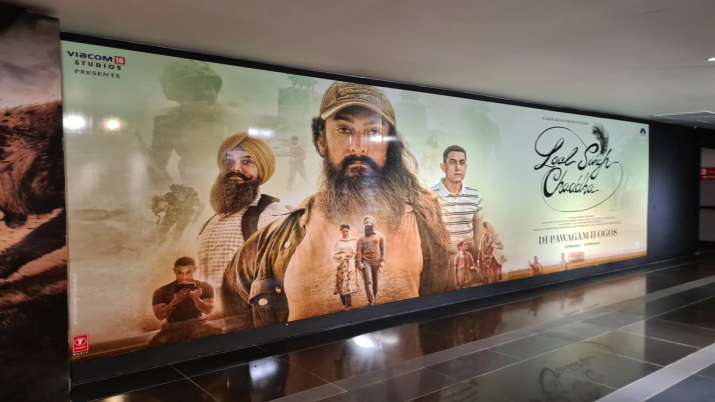 Amidst all the hue and cry surrounding Tom Hanks starrer Forrest Gump’s official adaptation Laal Singh Chaddha, there are a few good things that people have overlooked and might have forgotten to mention. It is unfortunate how certain aspects of the movie haven’t either been acknowledged or spoken about. Mr. Perfectionist Aamir Khan returns to the silver screen after a gap of 4 years. Aamir’s previous movie Thugs of Hindostan which was produced by Yash Raj Films bombed at the box office and proved to be a major setback for his career. The periodic drama was an ambitious project with megastar Amitabh Bachchan and Aamir Khan sharing the screen.

While Aamir was still filming Laal Sigh Chaddha, the pandemic struck, and just like everything around, he had to stop production. With everything going haywire, Aamir chose to stay committed to the project. It took him almost eight years to acquire the rights to Forrest Gump, the blockbuster 1994 film which went on to win six Oscars in different categories. This film has been brewing for 14 years and it has now opened to mixed reactions amidst voices that are mercilessly calling out people to boycott this flick. Aamir Khan and co. certainly did not get everything right. On the flip side few aspects of the movie still manage to do justice to the original flick.

Here are five things that Laal Singh Chaddha got right:

The casting of young Laal


With an IQ of 76, Forrest from Alabama becomes Laal from Karoli, Pathankot in the Hindi adaptation. The onus falls upon the child actor to present Laal’s mannerisms, strengths, and flaws in front of the audience. Actor Ahmed Idn Umar does a fantastic job as young Laal and is terrific. Without saying much or without any added theatrics, Umar, the 10-year-old Kashmiri kid sets up the titular character beautifully and makes it relatable for the audience.

This is one aspect that the casting director needs a raise for. In the original movie, Forrest is introduced to songwriter Elvis Presley who in many ways is the symbol of the American culture and teaches him to groove. The Hindi adaptation has done a brilliant job by casting Shah Rukh Khan in the same sequence who in many ways has been the face of globalization. The timeline is such that Shah Rukh’s story and career graph coincide with Laal’s journey and Advait Chandan, the director has hit the bullseye with this move.

No matter whatever the film’s fate turns out to be, one thing can be said for sure, Laal Singh Chaddha’s music is here to stay. The album which is composed by Pritam and written by Amitabh Bhattacharya just adds value to the beautiful frames that have been shot. The background score too has been designed in such a way that it adds to Laal’s innocence and in many ways makes his journey extremely intriguing. Tracks like “Kahaani” and “Tur Kalleyan” have been appreciated by the listeners and they will age like fine wine.

Just like Forrest Gump, Aamir Khan and Kareena Kapoor starrer Laal Singh Chaddha is an episodic film, a genre that is slowly fading away with time. The movie starts with the end of the emergency in 1975 and ends at a point in time when people have smartphones. Laal’s journey spans across decades and coincides with key incidents such as operation Bluestar, the assassination of former Prime Minister Indira Gandhi, the 1983 World Cup victory, the Mumbai riots, the 1999 Kargil war, and many more. This might sound scary on paper, but the makers have figured out a way to map Laal’s journey through all of it.

Since the story is so widespread, loads of moments have been recreated accordingly. The makers have done a fantastic job with the war sequences and with the color tone of the movie. From the look and feel of the retro times to the start of the millennial period, cinematographer Satyajit Pande does an amazing job. The camera work is just top notch and the recce team deserves some credit for discovering breathtaking locations that are still undiscovered in our country.

Like many other Hindi movies, the film does falter in many places but as far as the positives are concerned, Aamir Khan and co. have tried to make it a visual treat and only time will tell if the makers have succeeded to transcend their vision or not.