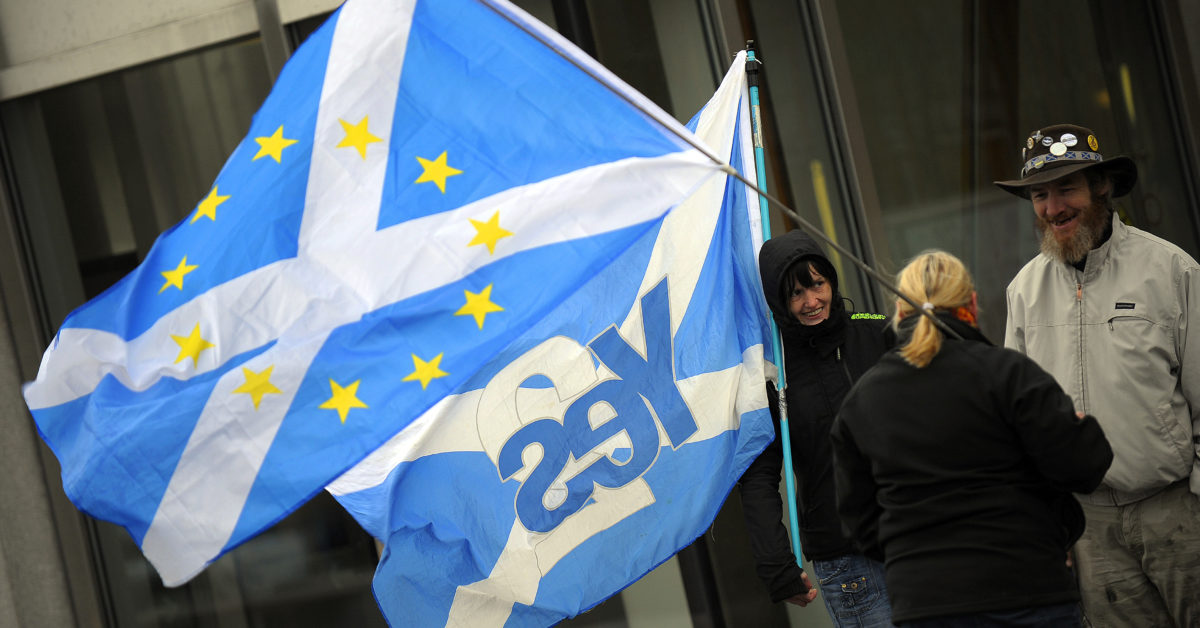 GLASGOW â€” To the outsider, Scotlandâ€™s rival political camps may look as deeply entrenched as ever. But the sands have been shifting.

The broad dividing lines remain the same. On one side, proponents of independence, their sights set firmly on a second referendum and the promise of self-rule. Opposite, supporters of the status quo: a union with England, Wales, and Northern Ireland dating back over 300 years.Â

However, a labyrinth of new divisions lurks below. Brexit, coronavirus, the Scottish National Party (SNP)â€™s internal meltdown over its handling of sexual abuse allegations against former First Minister Alex Salmond; all are new considerations since Scots rejected independence in 2014.

â€œThe SNP will work hard for every vote and take nothing for granted. [Backing the party is] the only way to guarantee that Scotlandâ€™s future is in Scotlandâ€™s hands â€” not Boris Johnsonâ€™s,â€ said SNP Westminster Deputy Leader Kirsten Oswald.

â€œA growing number of people have moved from â€˜Noâ€™ to â€˜Yesâ€™ and want to see Scotland become independent so we can build the fairer society.â€

Paula Kirby is one such convert to the independence cause. Seven years ago, separation just didnâ€™t seem worth it to the freelance translator: the U.K. was fairly prosperous, progressive, and stable. Brexit â€” a bolt from the blue that few foresaw in 2014 â€” changed all that for Kirby.Â

â€œBritainâ€™s EU departure was always going to be a hugely regressive step, but the reality is proving even worse than I anticipated,â€ says the one-time No voter, now a fully paid-up SNP member.

â€œThe collapse of Scottish fishing, a deterioration in the range and quality of supermarket fresh food, difficulties sending items to Europe, the small-minded, shortsighted folly of not remaining part of Erasmus; itâ€™s all terrible,â€ she added.

Kirby is far from alone in her Brexit ire. Almost two-thirds of Scots rejected European departure in 2016, only for successive Westminster governments to pursue strict exit terms. Spotting an open goal, the SNP doubled-down on its anti-Brexit position â€” a move thatâ€™s paid dividends in the polls. As of early 2021, a majority of Scots indicated support for the party at Mayâ€™s Scottish Parliament election, with 63% endorsing a return to EU membership (something independence would facilitate, nationalists say).Â

But Brexit is a double-edged sword for the SNP. A fractious and often messy affair, Britainâ€™s withdrawal from Europe has shown the agony of grand constitutional change, as well as its unintended consequences. It also raises unavoidable â€” and, for some, unanswerable â€” questions on relations with England should a sovereign Scotland seek EU accession.Â Â

â€œWeâ€™ve seen with the Irish Republic and Northern Ireland how difficult it is to have a land border between an EU and non-EU state. If Scotland were to become independent and rejoin Europe, the border with England would be impossible,â€ says IT specialist Heather Herbert.

Brexit isnâ€™t her only concern. In 2014, having recently moved north of the border, Herbert was won over by the independence movement: it spoke to her progressive values and liberal politics â€” or so she thought. In the years that followed, a disturbing undercurrent of ethnonationalism and what she regards as LGBT-hate began emanating from the edges of the separatist camp, says the trans activist.

â€œWhen it comes to prejudice against marginalized groups, it was sort of like: â€˜OK, just brush it under the carpetâ€™. Thereâ€™s a lot of hate thatâ€™s masked by the campaign for independence, one reason I canâ€™t support it any longer.â€Â

A wider civil war also rages, including the sensational split between First Minister Nicola Sturgeon and her one-time friend and mentor Alex Salmond.Â

Sexual harassment claims dating back almost a decade were weaponized by Sturgeonâ€™s administration to remove him from public life, Salmond believes. In 2019, he successfully sued the Scottish government over its botched investigation into the allegations, before being arrested, prosecuted, and finally acquitted of all criminal charges.

A free man, Salmond went on the offensive, accusing Sturgeon of misleading parliament in her account of events â€” a career-ending crime if proven true. A series of inquiries probed the claim, and though it was deemed credible, Sturgeon did not breach Scotlandâ€™s ministerial code of conduct, an independent arbiter ruled.Â

Yet for many in the independence camp, the SNP leader hasnâ€™t emerged unscathed.Â

â€œDo I believe that Nicola was completely innocent in it all personally? No,â€ says Alison Watters, an activist and campaigner.Â Â

Sheâ€™s far from the only one with misgivings, polling suggests. A sizeable chunk of Scots â€” 40% â€” do not believe Sturgeon has been entirely honest about the Salmond affair; and though a narrow majority said she shouldnâ€™t have resigned immediately, almost two-thirds surveyed before the inquiries returned their findings said Sturgeon must go if shown to have lied.Â

Concerns run deeper than the Salmond saga, however. The engine of independence is sputtering under Sturgeon, Watters worries, pointing to the SNPâ€™s focus on priorities other than separation.Â

â€œSheâ€™s delayed independence unnecessarily, I think, and sheâ€™s wasted too much time on trying to delay a Brexit which England voted for, on interfering in another countryâ€™s democracy.â€

Thatâ€™s one of the reasons Watters has joined the recently formed Alba Party, a new pro-independence outfit headed up by Salmond. Sheâ€™s confident the group can help deliver a super majority for independence at the Holyrood election â€” and in doing so, â€œhold Sturgeonâ€™s feet to the fire and speed things up.â€

Others though are wary of rushing into a referendum while the country is still dealing with a pandemic. This point came up in a series of focus groups organised by the right-leaning think tank Onward and shared exclusively with POLITICO.Â â€œQueen Nic,Â as weâ€™ve dubbed her in our household, actually needs to wind her neck in and just deal with whatâ€™s going on at the moment,â€ one woman told the researchers.

And even voters in favor of leaving the U.K. say now is not be the time. â€œI thinkÂ ScotlandÂ needs to fixÂ ScotlandÂ first â€” 100 percent.Â ScotlandÂ and all the people need to be fixed and be ready and go into it with open eyes once everything has healed,â€ said a woman in her 40s.

Others areÂ beginning to feel the SNP hasÂ simplyÂ been in power too long. John Donaldson, also from Glasgow, is fed up with the current government. Having backed independence in 2014, heâ€™s now dead against it.

â€œI hate this blaming Westminster for everything, always acting like the victim,â€ the distribution worker says. â€œThe Scottish psyche is all about being the underdog, but thereâ€™s a difference between being an underdog and a victim. The whole victim mentality is very unhealthy.â€

While heâ€™s depressed by the acrimonious Salmond affair, his change of heart is more about democracy: the referendum was only seven years ago, it must be obeyed. So, come May, Donaldson will be voting tactically to end the SNPâ€™s fourteen year grip on power.

By just about any measure, thatâ€™s a long stint in office. While the party has made progress in some key areas, like affordable housing and prescription charges, its domestic record is patchy. Scottish schools have been slipping in international rankings, and an unacceptable attainment gap persists. Accident and emergency waiting times remain longer than promised, too, and Scotland bears great shame as Europeâ€™s drug death capital.Â Â Â

Yet, while polling on the SNPâ€™s domestic performance dipped in late 2019, it had rallied a year later â€” a consequence of Sturgeonâ€™s initially surefooted handling of COVID-19.Â

Still, thereâ€™s work to be done for the nationalists. If theyâ€™re to win an outright majority in May â€” fundamental in the quest for a second independence referendum â€” floating voters like Sohaib Haseeb, an accountant, must be convinced.Â

â€œBefore a second referendum, Iâ€™d need to see a coherent strategy from the SNP detailing how an independent Scotland could fund the current levels of social spending,â€ says Haseeb, who rejected separation in 2014.

Elections come and go, and voter allegiance sways â€” but that, ultimately, remains the SNPâ€™s biggest challenge: convincing a majority that independence wonâ€™t be a historic mistake.