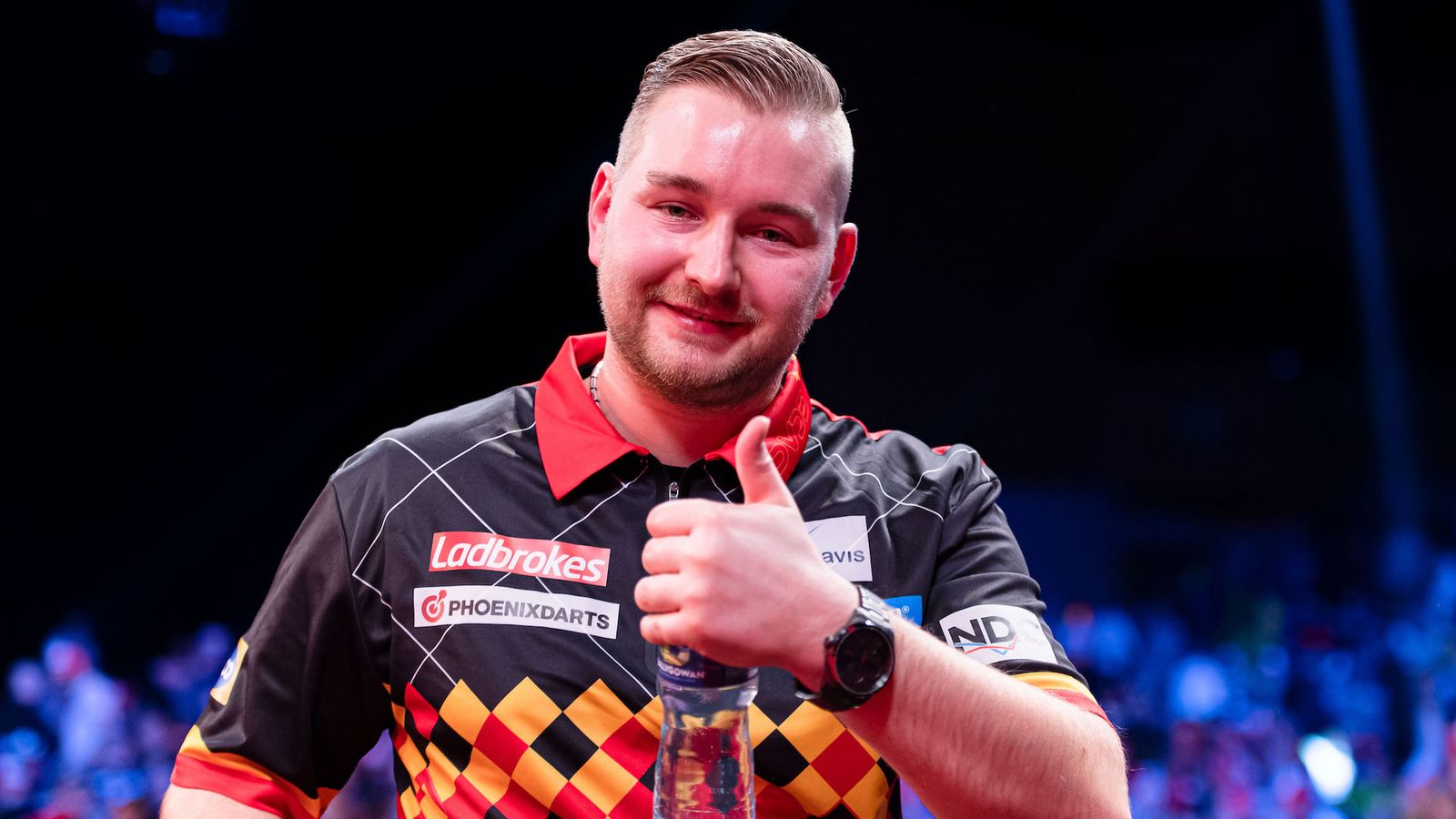 Dimitri Van den Bergh and Simon Whitlock enjoyed eye-catching victories on day one of the Ladbrokes Masters in Milton Keynes on Friday.

Both Van den Bergh and Whitlock bounced back from second-round exits at the World Championship by averaging over 100 in wins over Ian White and Dirk van Duijvenbode, respectively.

Van den Bergh averaged a 105.31 in a superb 6-1 defeat of White, opening the tie with a 167 checkout before adding a 108 checkout during a dominant display.

He will now meet reigning champion Jonny Clayton in Saturday’s second round, and the Belgian was delighted to put his Alexandra Palace disappointment behind him.

“I’m chuffed to get through to the next round and I want to take a lot of confidence from this,” said Van den Bergh.

“My last game was at Ally Pally but in that game, I didn’t take the little chances and my opponent didn’t miss, and today it went the other way.

“Jonny’s playing amazing darts and I’ll have to play as well as this, if not better, to beat him.”

Experienced Australian Whitlock made the most of his call-up to replace Danny Noppert with a 6-2 defeat of Van Duijvenbode, moving him through to a tie with recently-crowned World Champion Peter Wright.

“I’m over the moon with that performance,” said Whitlock. “I’ve been working hard over the last month because I know I need a big year.

“I’m feeling confident and Peter won’t be getting easy game, that’s for sure. I can’t wait for it.”

Joe Cullen was also in impressive form, averaging just under 100 in a 6-2 defeat of Daryl Gurney as he moves through to play Gary Anderson in round two.

“It’s always difficult coming into a TV tournament after a long lay-off – I’ve had a break but I played well tonight,” said Cullen.

“I had to get on top of Daryl because he’s a confident player and it was a good performance.

“The game against Gary should be a great spectacle and I’ll be confident going into it.”

Here’s how the draw bracket is shaping up after Night One of the Ladbrokes Masters.

Some tasty ties coming up in Saturday’s second round! pic.twitter.com/1cpcebUchf

Three-time World Championship quarter-finalist Luke Humphries meanwhile continued his fine form with a convincing 6-1 win over Devon Petersen, who was a late replacement for Nathan Aspinall.

A near-perfect Masters debut from Humphries sees him advance to the last 16 where five-time champion Michael van Gerwen awaits.

“I felt good up there and this was a solid performance – I hit the right doubles at the right times,” said Humphries. “I feel like I can play a bit better, but I can put that right tomorrow.

“The last time I played Michael at the Marshall Arena, I beat him in the semi-finals of the UK Open. I believe I can beat him, and I feel like I’m in a good place.”

Ryan Searle set up a tasty meeting with world number one Gerwyn Price by seeing off 2020 Masters finalist Mervyn King 6-1.

“It felt good today and I played a solid game,” said Searle. “I feel like I’ve still got another gear to go but I was good in patches.

“I’ve got nothing to lose tomorrow so hopefully I’ll step on stage and play my best stuff. Gerwyn’s the world number one so it will be hard but I’m looking forward to it.”

Former Masters finalist Dave Chisnall was in ruthless finishing form as he whitewashed Stephen Bunting 6-0 to set up a meeting with James Wade.

The Masters continues on Saturday with two sessions of last-16 ties, before Sunday’s final day of action plays host to the quarter-finals, semi-finals and final.

Check out daily Darts news on skysports.com/darts, our app for mobile devices and our Twitter account @skysportsdarts. Watch the Premier League every Thursday on Sky Sports, starting on Feb 3!