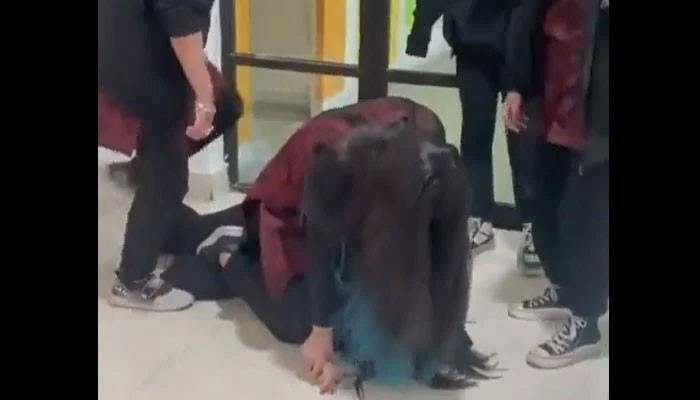 LAHORE: The registration of the private school linked with the case of bullying of a female student in the school’s premises was suspended till the next hearing, during proceedings held by District Commissioner Mohammad Ali on Wednesday.

The incident of bullying and manhandling of a girl by her female class fellows at a private school in Lahore’s Defence Housing Authority (DHA) surfaced last week when the video of the incident went viral. A case was booked against four girls for allegedly torturing their fellow student.

DC Mohammad Ali decided on suspending the school’s registration after hearing the arguments from parties in the case over District Education Authority’s (DEA) recommendations stated in its inquiry report.

The school’s owner and principal also attended the proceedings.

The DC suspended the school’s registration and directed the authority’s chief executive officer to look after the school affairs till the suspension of registration.

Meanwhile, the school administration and parents of the students involved in the matter, were directed to submit a reply in response for the inquiry report on the next hearing.

The DEA CEO was also directed to issue notices to the parents in this regard.

As per the report, the incident took place outside the cafeteria of the school in which four female students “tortured their class fellow”.

The report stated that the students involved in the matter were “friends” and the issue was created over sharing the pictures of a “student party outside the school” with parents.

It further stated the school in question lacks discipline and that there are no security cameras installed at the entrance of the cafeteria.

The inquiry officials have recommended slapping a Rs600,000 penalty to the school or suspending the school’s registration.

Moreover, the officials have also recommended expelling the students who manhandled the victim

The inquiry report comprising of the recommendations has been sent to the Lahore DC, who had ordered the inquiry right after the matter came to light.

Meanwhile, the said female students, including the victim, were rusticated by the school administration on Tuesday.

The school administration said that the girls have been suspended till the investigation of the case is completed. It also formed a three-member inquiry committee to investigate the matter independently as well.

The probe committee has been directed to complete the inquiry within 10 days and submit the report.

“Action will be taken against those responsible in light of the investigation carried out by the committee,” said the administration.

On January 21, the police lodged the first information report (FIR) against the suspects under sections 337A (i), 354, and 379 of the PPC after a video of the girl students beating the victim went viral on social media.

Imran Younas, the victim’s father, launched the FIR. He alleged in the FIR that his daughter’s schoolmate is a drug addict who wanted his daughter to join her company.

The FIR stated that one of the girls had a dagger as well. Moreover, the victim’s father also alleged that his daughter’s gold chain and a locket were also snatched by the suspects while they were attacking her.

He said that his daughter was tortured by two sisters when she refused to join their group. According to the FIR, the suspects attacked the victim, dragged her to the canteen, and humiliated her there.

The victim’s father said that he has also approached the Federal Investigation Agency (FIA), seeking action against those who uploaded the video on social media.

In the video, the victim could be seen crying for help while a girl can be seen sitting on her back, arm-twisting and hurling abuses at her.

A second girl can also be seen walking to the victim and sitting on her back, while a third slaps her. The victim reportedly received injuries on her face and was transported to a hospital for treatment.