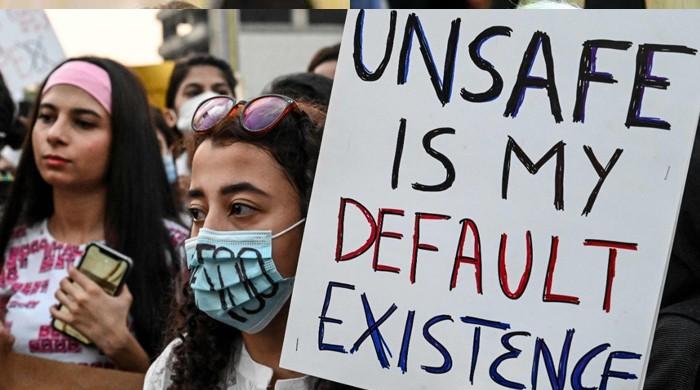 Pakistanis from all walks of life took to the streets on Saturday, demanding immediate and stern action against those involved in the Lahore-Sialkot motorway gang-rape.

The demands of the citizens varied from “hanging the culprits” to the removal of Lahore Central City Police Officer (CCPO) Umar Sheikh for his victim blaming comments.

The protesters from the capital’s civil society said that the suspects should be awarded maximum punishment in accordance with the law.

The protesters held several placards with messages such as “We demand justice”.

PPP Secretary-General Nayyar Bukhari and Senator Rubina Khalid were a part of the protest as well.

A protest against the tragic incident was also held in Punjab’s capital, at the city’s famous Liberty Market.

Several politicians, including, PPP’s Aitzaz Ahsan and Samina Khalid Ghurki, were standing in solidarity with the protesters and the victim.

“The motorway tragedy is a horrible incident,” Ahsan said, adding that the attitude demonstrated by Lahore police chief Umar Sheikh was “shameful”.

“It seems like the CCPO cannot protect women, children, and the elderly,” he added.

Meanwhile, Jamaat-e-Islami’s women’s wing, protesting in Rawalpindi, demanded that the culprits of the gang-rape case be “hanged” for their crimes.

The protesters held placards and banners during the demonstration.

The government officials should come out of their houses and ensure the security and safety of women, they demanded.

The protesters lamented that no institution was ready “to accept the responsibility for the tragic incident.

Home Based Women Workers Federation along with other organisations protesting in Karachi outside Karachi Press Club demanded stern action against the criminals involved.

“Those involved in the incident should be brought to justice immediately,” protesters including women, men, and children, demanded.

There were loud chants calling for the removal of the Lahore CCPO.

Additionally, fiery speeches highlighting the role of women in society and their struggle for obtaining their rights were delivered.

The civil society of Peshawar, protesting outside the city’s press club, demanded that the rapists be “hanged to death”.

“Women should be given protection and security,” the protesters said.