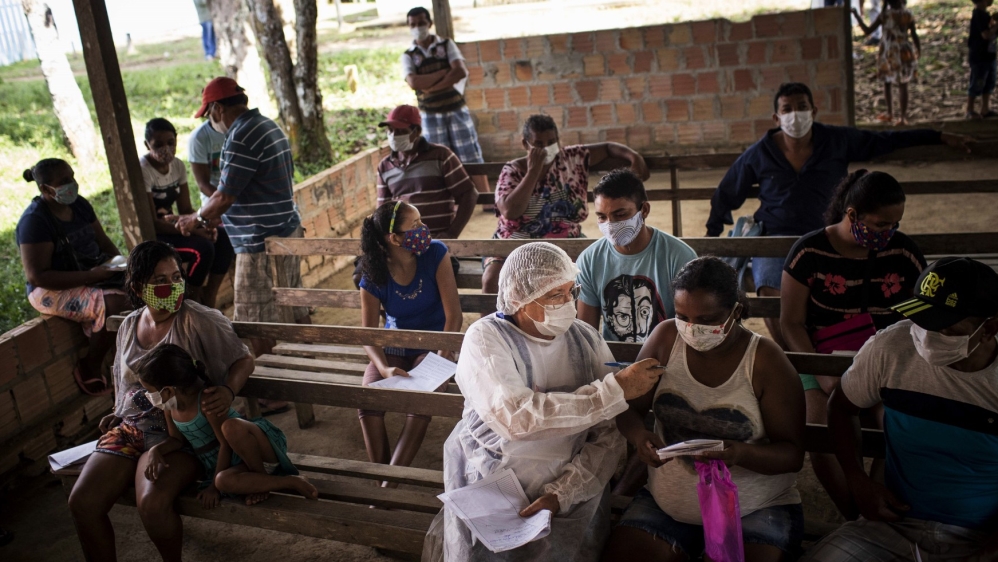 The number of confirmed coronavirus cases in Germany has increased by 286 to 181,482, according to data from the Robert Koch Institute (RKI) for infectious diseases. The reported death toll rose by 11 to 8,500, the data showed.

Thailand has reported four new coronavirus cases and no new deaths, taking the total number of infections to 3,081 with 57 deaths since January, according to the Reuters News Agency.

The new patients had arrived in Thailand from the United Arab Emirates (UAE), Turkey, and Saudi Arabia and have been in state quarantine.

Local infections have slowed and over the last two weeks, about 80 percent of new cases were Thais who had returned from abroad. Thailand will on Monday begin reopening more businesses classified as medium to high risks, including cinemas and gyms.

Thailand has 3,081 total number of infections with 57 deaths since JanuaryÂ [Sarayuth Jojaiharn/AP]

Russia has recorded nearly 9,000 new cases of the coronavirus, roughly consistent with the increases reported over the past two weeks.

The national coronavirus taskforce said 4,555 Russians have died of COVID-19 and 396,575 infections have been confirmed overall.

If all categories are counted as COVID-19 deaths, the nation’s total toll for April would stand at 2,713, or nearly 60 percent more than the previously announced number.

Italy’s foreign minister has warned that the European Union will “collapse” if governments treat Italians like lepers over the coronavirus and “blacklist” Europe’s one-time virus epicentre during the summer tourism season.

Luigi Di Maio posted a blistering Facebook message on Saturday after Greece excluded Italians – as well as nationals from Spain, the United Kingdom and other countries with high infection rates – from the list of foreign tourists it will welcome this summer.

Di Maio said competition for tourism is one thing, but he insisted that it be healthy and fair in demanding a European response to the reopening of EU borders after virus lockdowns. He warned: “If you act differently and dislocated, the EU spirit will be lost. And Europe will collapse.”

Far-right demonstrators hold an anti-government protest in the Italian capital, Rome, on Saturday, following the economic crisis due to the pandemic [Cecilia Fabiano/LaPresse via AP]

North Macedonia has extended its state of emergency for another two weeks because the coronavirus pandemic shows no sign of slowing down.

President Stevo Pendarovski announced the extension on Saturday following a meeting of the National Security Council.

The country’s health authorities reported five new deaths and 35 infections in the previous 24 hours, days after the government allowed bars, cafes and restaurants to reopen. North Macedonia had reported a total of 2,146 confirmed virus cases as of Saturday, including 131 deaths.

Romania’s prime minister has paid fines totalling about $600 for smoking indoors and holding a meeting in a government building where several Cabinet ministers and other participants did not follow social distancing rules, The Associated Press news agency reported.

In a photograph published in Romanian media, Prime Minister Ludovic Orban and others can be seen smoking with food and bottles of alcohol on a table. No one in the photo wore a mask or maintained the required spacing.

Orban told the Mediafax news agency that the picture was taken on May 25, his birthday. The foreign minister and economy minister of Romania were among those attending.

China has recorded two new confirmed cases of coronavirus, down from four on Saturday, Reuters reported on Sunday, quoting data from the country’s health authority.

Both cases were imported in the Chinese province of Shandong, the National Health Commission (NHC) said in a statement on its website. The NHC also confirmed three new asymptomatic cases, compared with four the day before.

With no new deaths reported, the death toll remained at 4,634. The total number of confirmed cases in the mainland as of May 30 stood at 83,001, data form NHC showed.

South Korea has reported 27 new cases of the coronavirus, the lowest since a cluster infection linked to a logistics centre near Seoul broke out last week, Yonhap news agency reported quoting health officials.

The country reported one additional death, bringing the total death toll at 270. The death rate was 2.35 percent. The total number of people released from quarantine after full recoveries stood at 10,405, up 7 from the previous day, with 793 people currently under treatment.

Mexico has reported 2,885 new cases of coronavirus and 364 more deaths, bringing the total numbers to 87,512 cases and 9,779 deaths according to data from health authorities.

The mayor of Colombia’s capital is planning to shut down one of the city’s largest neighbourhoods as cases there continue to rise.

Police and military will enforce the lockdown and no one will be allowed out, except to seek food or medical care or in case of an emergency.

Businesses like manufacturing that had been allowed to operate will be ordered closed. Lopez said testing for the virus will be doubled. The area today has nearly 2,500 more cases and hospitals there are reaching maximum capacity.

Greek officials have said the country would not limit incoming tourists to those from a list of 29 nations, but travellers from countries not on the list will be subject to mandatory testing on arrival and a period of quarantine depending on test results.

The policy will only be applied during the final two weeks of June, although Greek authorities left open the prospect of additional restrictions after that date.

Arrivals from the 29 countries listed will be tested randomly. The list was drawn up based on a document from the EU Aviation Safety Agency.

Disinfection teams have swept Istanbul’s Grand Bazaar, and the resumption of domestic flights have been announced as Turkey prepares to lift many remaining coronavirus restrictions.

Teams scrubbed the floors of the 15th-century bazaar, which has been closed since March 23, before Monday’s return to business. The transport minister said the first air routes between Istanbul, Ankara, Izmir, Antalya and Trabzon would restart on Monday, with others following gradually.

On Saturday evening, Health Minister Fahrettin Koca announced 983 new cases of coronavirus during the previous 24 hours, taking Turkey’s total number of cases to 163,103. In a tweet, he said there had been 26 deaths from the virus over the same period, bringing the overall death toll to 4,515.

You can find all the updates from yesterday, May 30,Â here.