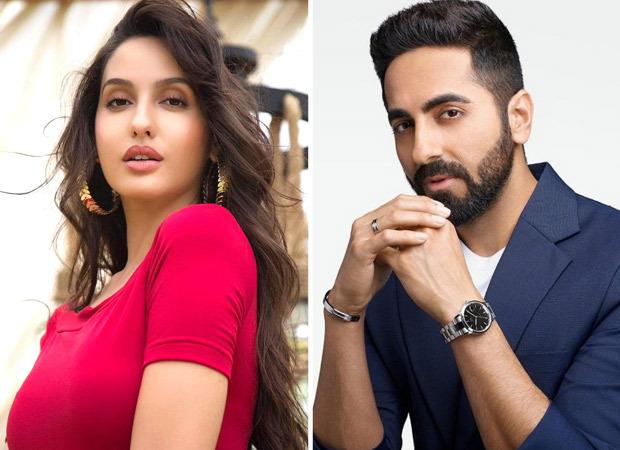 Bollywood actor Ayushmann Khurrana is currently making headlines for his upcoming film An Action Hero. The trailer of the film was released on November 11, in which he is seen in a very banging style. After the release of the trailer, a video leaked from the sets of the film, where Ayushmann Khurrana and actress Nora Fatehi, are together.

LEAKED: Nora Fatehi shoots with Ayushmann Khurrana for a song in An Action Hero, watch

In a video, shared on Bollywood Hungama’s official Instagram page, Khurrana and Fatehi are seen dancing among many dancers. Looking at the video, it seems the makers are shooting the song in an old fort.

In the video, Ayushmann is seen sporting a dapper look wearing a black suit and pants, along with goggles. On the other hand, Nora Fatehi look can be seen wearing a shimmery bodycon dress. Also, it seems the makers have picked the popular song ‘Nasha’ created by Amar Jalal Group and Faridkot.

Interestingly, it seems the forthcoming action film will feature two item songs, one with Nora and the other with Malaika Arora. The trailer of the film features a blink-and-miss glimpse of Malaika’s song.

Talking about the film, the Anirudh Iyer directorial will also feature Jaideep Ahlawat locking horns with Ayushmann. The film is slated to release on December 2. After the trailer release, Khurrana had said, “An Action Hero is a genre breaker for me. It is different from my staple genre of social comedy and there is no message in it. There is pure thrill. It is a roller coaster ride,” in a statement.

Also Read: Akshay Kumar to have a cameo in Ayushmann Khurrana starrer An Action Hero