Lindsey Graham Doesn’t Regret His Call For An Abortion Ban 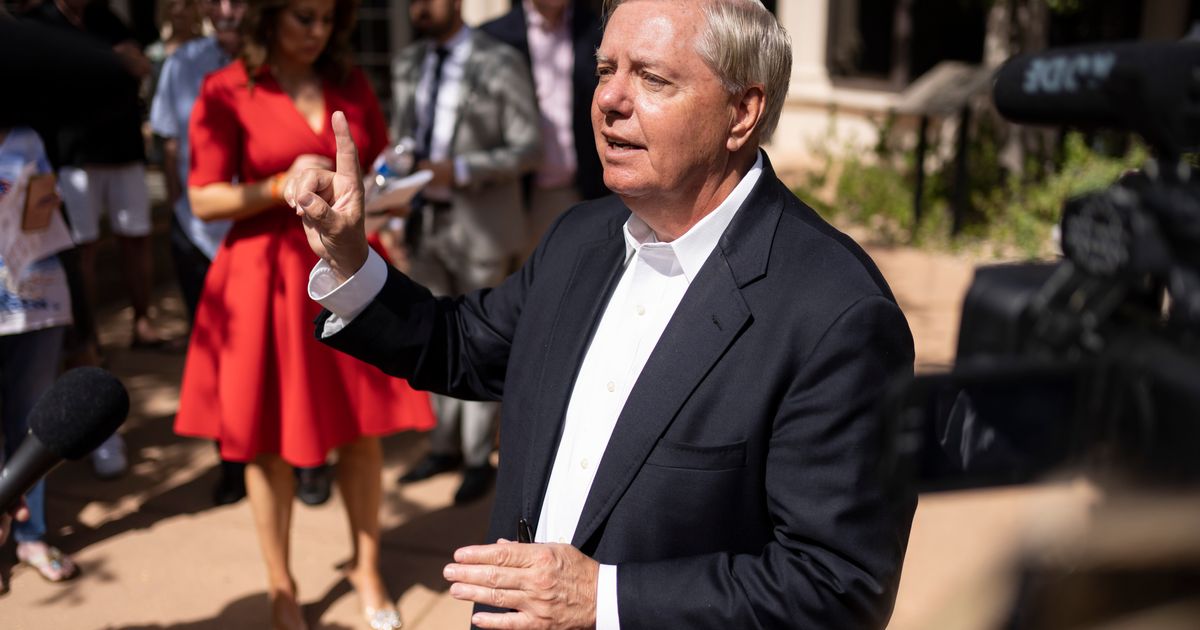 Since Republicans failed to live up to lofty expectations in last week’s midterm elections, party operatives, officials and strategists have all conceded that their staunch opposition to abortion rights likely hurt them.

But Sen. Lindsey Graham (R-S.C.), who introduced legislation for a national abortion ban just weeks before the election, was unapologetic about his controversial decision to press the matter.

“Everybody who embraced my bill did pretty good,” Graham told HuffPost. “J.D. Vance won [in Ohio], [Sen. Marco] Rubio won [in Florida] — I think America is very much in the camp of restrictions late in the pregnancy.”

Graham’s bill would have banned abortion after 15 weeks across the country, undercutting other Republicans who maintained the issue should be left up to individual states. Democratic candidates were able to point to the proposal as evidence of what the GOP would do with a Senate majority.

Although Vance and Rubio did win last week, other Republicans who embraced the idea of a national abortion ban lost, including venture capitalist and Senate hopeful Blake Masters in Arizona.

Both Republican and Democratic strategists agree that the Supreme Court’s decision in Dobbs v. Jackson Women’s Health Organization ― which overturned Roe v. Wade and ended the federal protection of abortion rights ― changed the midterms, awakening a Democratic base that was otherwise slumbering peacefully with former President Donald Trump out of office. (Various strategists disagree, however, on what role Dobbs played in winning over independents and moderate Republicans to the Democratic cause.)

Some Republican senators also pointed to Dobbs as a reason their party struggled.

“I think abortion was a much bigger issue against us than we anticipated,” Sen. Mitt Romney (R-Utah) told HuffPost.

“Dobbs did have an impact on the suburban vote,” Sen. Thom Tillis (R-N.C.) said.

For much of the cycle, Republicans worked feverishly to downplay the issue’s importance and soft-pedal the possibility that the party would move to significantly restrict abortion if it won control of Congress. Graham’s decision to introduce a ban blew up that strategy, even if some polling suggests the idea of a 15-week ban divides the electorate somewhat evenly.

At a press conference with other Senate Democrats, Sen. Catherine Cortez Masto (D-Nev.) pointed to Graham’s abortion ban as a turning point in her successful race against Republican Adam Laxalt. Nevada’s state constitution protects abortion rights, and Laxalt’s campaign had argued that the issue should be of limited importance to the state’s voters.

“I had been talking about a federal abortion ban, and that my colleagues were going to try to introduce one to preempt our state law, and then Lindsey Graham introduced it,” Cortez Masto said.

Graham urged Democrats to keep embracing abortion rights, predicting it would cost them in the future.

“Roe v. Wade gave [Democrats] energy, but their position on abortion versus my position — I like that contest,” he said.

In Nevada, the issue favored Democrats even more: Two-thirds of voters said abortion should be legal most of the time, and Cortez Masto racked up a 68% to 29% margin of victory among those voters.

Even in Ohio, a state that Graham cited as evidence of his plan’s popularity, it’s clear abortion rights benefited Democratic Rep. Tim Ryan in his ultimately unsuccessful race against Vance. A 58% majority of Ohio voters said abortion should be legal most or all of the time, and Ryan won those voters by a 69% to 31% margin.

Ryan campaigned on abortion rights far less than most other Democrats did, never once airing a television ad on the topic. His campaign instead targeted abortion rights supporters with a plethora of digital ads on Facebook, YouTube and other platforms.

Groups opposed to abortion rights have similarly pointed to the results in Ohio and the reelection of four Republican governors who’d signed strict abortion restrictions ― Brian Kemp of Georgia, Greg Abbott of Texas, Mike DeWine of Ohio and Ron DeSantis of Florida ― as evidence that their issue did not singlehandedly destroy the GOP’s chances of a red wave. (Left unsaid in this analysis: Incumbent governors rarely lose their reelection bids.)

In the long term, however, it’s unlikely Republicans will be able to stick to the relative political safety of a 15-week ban. Such a proposal would make fewer than 5% of American abortions illegal, according to Centers for Disease Control data, which might not be enough to satisfy social conservatives.