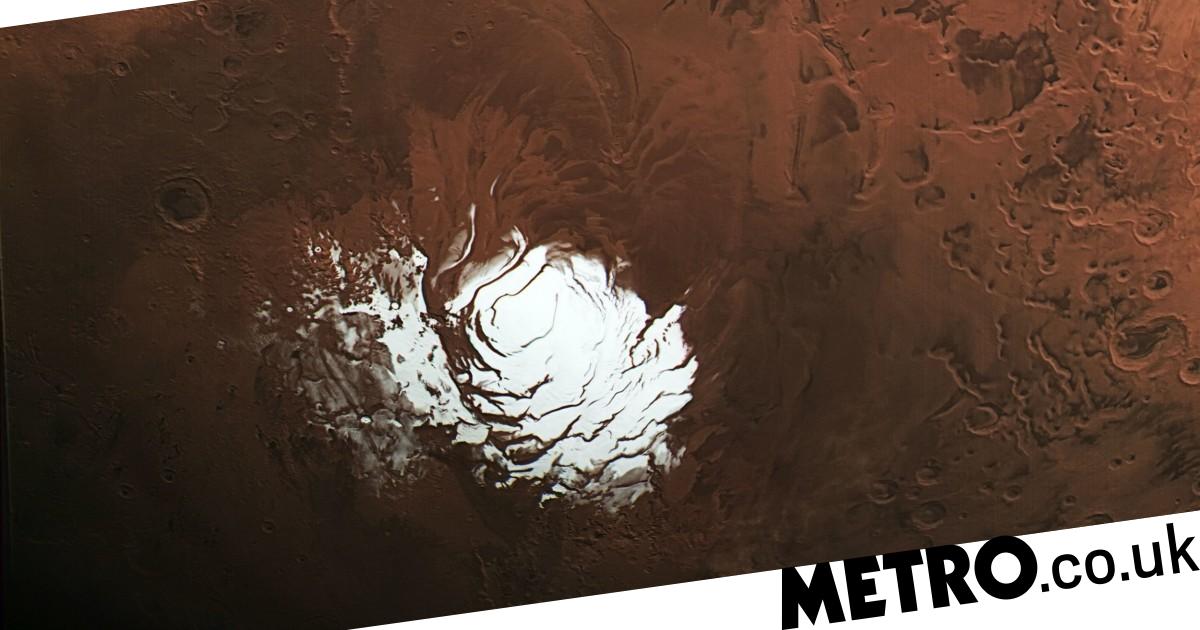 In 2018 scientists thought they were looking at water when they saw bright reflections under the polar cap.

However, according to new research, the reflections match those of volcanic plains found all across the red planet.

Scientists at the University of Texas at Austin think they have a more plausible explanation for the 2018 discovery, and suggest it was volcanic rock buried under ice that was seen.

Lead author, Cyril Grima, a planetary scientist at the University of Texas Institute for Geophysics (UTIG), said: â€˜For water to be sustained this close to the surface, you need both a very salty environment and a strong, locally generated heat source, but that doesnâ€™t match what we know of this region.â€™

The south polar mirage dissolved when scientists added an imaginary global ice sheet across a radar map of Mars.

They found that the imaginary ice showed how the planet would appear when looked at through a mile of ice.

This allowed them to compare features across the entire planet with those under the polar cap.

Mr Grima noticed bright reflections, just like those seen in the south pole but scattered across the planet.

And many matched the location of volcanic plains.

Iron-rich lava flows on Earth can leave behind rocks that produce similar reflections.

The scientists suggest other possibilities include mineral deposits in dried riverbeds.

But even if there is no liquid water on Mars, there is plenty of ice on the planet.

Isaac Smith, a Mars geophysicist at York University, believes the bright radar signatures are a kind of clay made when rock erodes in water.

He said: â€˜I think the beauty of Cyril Grimaâ€™s finding is that while it knocks down the idea there might be liquid water under the planetâ€™s south pole today, it also gives us really precise places to go look for evidence of ancient lakes and riverbeds and test hypotheses about the wider drying out of Marsâ€™ climate over billions of years.â€™

The study, published in the journal Geophysical Research Letters, is based on three years of data from Marsis, a radar instrument launched in 2005 aboard the European Space Agencyâ€™s Mars Express.


MORE : Nasa detects signs of past life on Mars