During remarks at the White House Rose Garden on Friday, Trump said, “Hopefully George is looking down and saying this is a great thing that’s happening for our country. (It’s) a great day for him. It’s a great day for everybody.”

“George Floyd’s last words — ‘I can’t breathe, I can’t breathe’ — have echoed all across this nation, quite frankly, all around the world. For the President to try to put any other words in the mouth of George Floyd, I frankly think it’s despicable,” Biden said, speaking from Delaware State University, a public historically black university in Dover.

Biden’s remarks come hours after a new jobs report was released that showed the US unemployment rate fell from April to May and that the job market may be recovering well ahead of schedule. 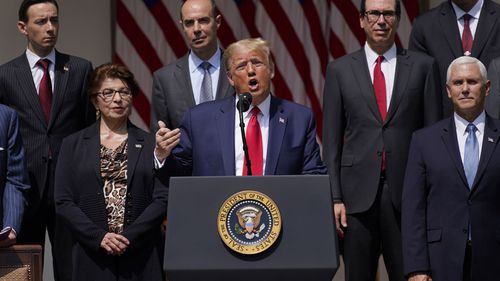 President Donald Trump speaks during a news conference in the Rose Garden of the White House, Friday, June 5, 2020, in Washington. (AP)

The President took credit for the surprising economic rebound, and called the jobs report “an affirmation of all the work we’ve been doing” over the course of his administration.

Biden said Friday he was “disturbed” to see Trump “crowing this morning, basically hanging a ‘Mission Accomplished’ banner out there, when there’s so much more work to be done. So many Americans are still hurting.”