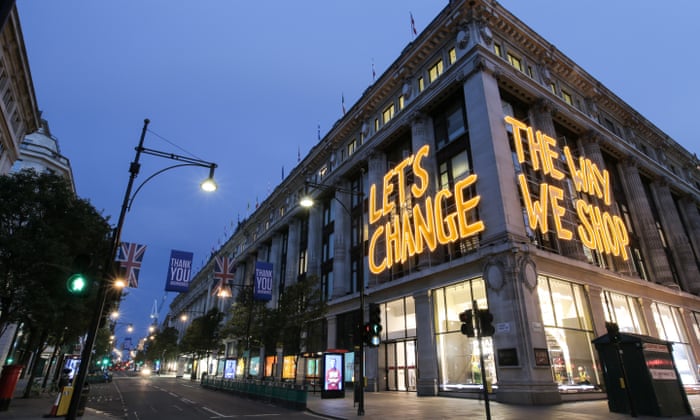 The British Retail Consortium estimated that lockdowns across 2020 cost non-essential retail Â£22bn in lost sales. So with non-essential shops allowed to open again on Monday after nearly four months, retailers have concocted plans to make real-life shopping trips a pastime once again.

Marks & Spencer will instigate â€˜greetersâ€™ at the doors of its stores, and contact-free bra fittings. There will be edits designed for current lifestyles, from barbecues in the garden, to working from home.

At John Lewis, Beautycycle will be in place from 19 April. For every five items of beauty packaging returned, customers will get Â£10 off their next beauty purchase until the end of April.

Gap will be offering free masks with a purchase to those with their Gap+ app, and Primark will be open two more hours every day next week.

Other retailers are taking a playful approach. River Island, which will launch stores in Coventry and Swindon next week, has a â€œshop like itâ€™s 2019â€ campaign; one sign in store says â€œIn 2019 pyjamas were not acceptable work attireâ€. Anyone who makes a purchase in April will receive a voucher for 20.19% off their next purchase.

â€œShopping again will feel both novel and nostalgic,â€ says River Islandâ€™s chief executive, Will Kernan. â€œWe think 12th April may prove quite poignant for a lot of shoppers.â€

Saisangeeth Daswani, the head of advisory for fashion and beauty at the trends agency Stylus, predicts a flood of shoppers initially. â€œThereâ€™s this huge sentiment of consumers feeling very fed up,â€ she says. â€œI just think everything is going to be very anti-domestic moving forward.â€

â€œExperienceâ€, a way to bring back the shopping trip and make retail part of a day out, is a buzzword. â€œConsumers have shopped from home for a long time now, they have really experienced the convenience,â€ says Daswani. â€œThere needs to be a really compelling reason for them to get dressed up, and take transportation to the store.â€

At Selfridges there will be SoulCycle classes, live DJ sets and a new concession from the athleisure brand Pangaia. There will also be an â€œexperience conciergeâ€ to arrange everything from skateboarding classes to beauty treatments.

â€œItâ€™s our job to make the world brighter,â€ says Sebastian Manes, the executive buying and merchandising director. â€œFor us, it all starts with the joy of experience and the extraordinary experiences we can offer in Selfridges stores in the heart of our cities.â€

Restrictions will still be in place: masks remain mandatory, and shoppers can only shop alone, with their household or in their support bubble.

Most stores will now have fitting rooms open, although M&S and Primark will not reopen theirs next week.

Trying on will take longer, with fewer customers admitted to preserve social distancing. Stores predict customers will brave the queues in pursuit of items such as a well-fitting pair of jeans or a bra.

Instore technology will also be more convenient and up to date. John Lewis has increased its contactless payment limit from Â£30 to Â£45, and M&S will add its Pay With Me service to lingerie, meaning people can buy womenâ€™s underwear straight after trying it on, rather than heading to a till. Customers can also book a time slot to avoid queues.

M&Sâ€™s stores director, Helen Milford, predicts the uplift in online shoppers will remain but may be supplemented by physical stores.

Kernan agrees. â€œA high street shopping spree one week, a quick purchase online the next is fine with us,â€ he says. â€œWe want to make it easy for customers to enjoy our fashion wherever and whenever they choose.â€