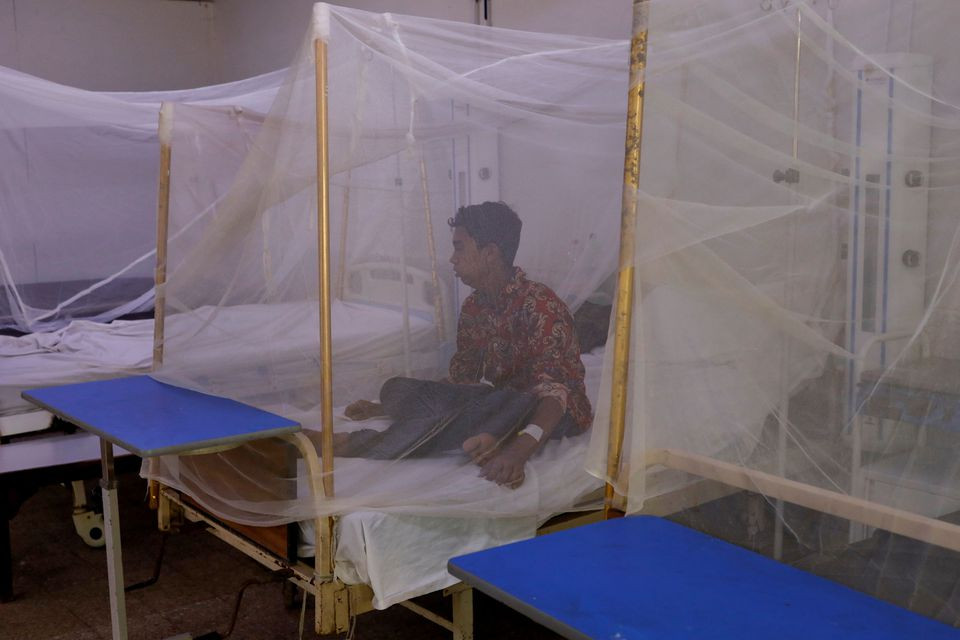 
The death toll from malaria and other diseases tearing through Pakistan’s flood-ravaged regions reached 324, authorities said on Wednesday.

Hundreds of thousands of people displaced by the floods were living in the open. Stagnant floodwaters, spread over hundreds of kilometres, may take two to six months to recede. Already they have led to widespread cases of skin and eye infections, diarrhoea, malaria, typhoid and dengue fever.

Hollywood actress and humanitarian Angelina Jolie also visited people displaced by the floods with international aid organisation IRC in an effort to raise awareness. She saw some of the worst affected areas in Sindh province.

“I’ve seen those lives who were saved,” she said but added that without sufficient aid, others “won’t be here in the next few weeks, they won’t make it.” Her comments, made when visiting the country’s flood response centre, were carried on video footage shared by Pakistan Army on Wednesday.

Authorities and aid workers have said more immediate help is needed for displaced families exposed to swarms of mosquitoes and other hazards, such as snake and dog bites.

Despite the efforts of the government and local and foreign relief organisations, many people are in dire need of food, shelter, medical assistance and medicines.

With Pakistan’s already weak health system and lack of support, displaced families have complained of being forced to drink and cook with unsafe water.

“We know it can sicken us, but what to do, we have to drink it to stay alive,” flood victim Ghulam Rasool told a private TV channel as he stood near where his home was washed away.

A historic and intense monsoon dumped about three times as much rain as Pakistan’s three-decade average. Combined with glacial melt, this caused unprecedented flooding.

The deluge, which scientists say was exacerbated by climate change, has affected nearly 33 million people in the country of 220 million. It has swept away homes, crops, bridges, roads and livestock in damages estimated at $30 billion.

Read: UN ‘Flash Appeal’ for flood victims to be launched on Aug 30

“I’ve never seen anything like this … I’m overwhelmed,” said Jolie, who has made several trips to Pakistan including after deadly floods in the country’s south in 2010.

“We need to work in a coordinated manner to respond to their immediate needs,” she said in a statement late on Monday, prioritising clean drinking water. Health and nutrition stand out as the most important needs of the displaced population, she said.

Finance ministry said it had approved Rs10 billion for the disaster management agency to use for procuring flood relief supplies and other logistics.

France plans to host an international conference this year on climate-resilient reconstruction of Pakistan’s flood-affected areas. The announcement came after Prime Minister Muhammad Shehbaz Sharif and French President Emmanuel Macron had a bilateral meeting on the sidelines of the 77th Session of the UN General Assembly (UNGA) in New York, said a statement issued by Pakistan Ministry of Foreign Affairs.

The Sindh provincial government said makeshift health facilities and mobile camps in flooded areas had treated more than 78,000 patients in the last 24 hours, and more than 2 million since July 1. Six of them died, it said.

It confirmed 665 new malaria cases among internally displaced families over the same period, with another 9,201 suspected cases. It said a quarter of the more than 19,000 patients screened in the last 24 hours across the province were positive, a total of 4,876.

Deaths from disease are not counted among the 1,569 people who were killed in flash floods, including 555 children and 320 women, the country’s disaster management agency said on Wednesday.