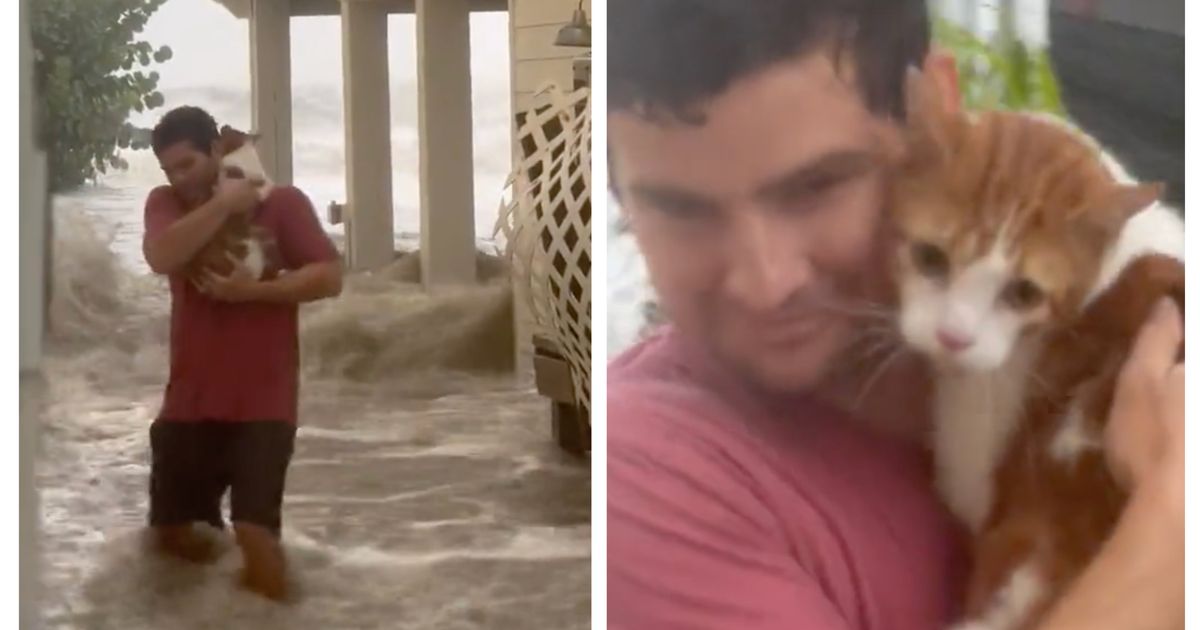 A man’s compassion for a stranded cat has left many on Twitter feline good.

“The storm surge had rushed up quite a bit at that point,” Ross told The Washington Post of the moment he decided to rescue an orange and white cat that was seeking refuge from the flood atop a mounted air conditioning unit. Ross said that although he had grown up in Florida and seen his fair share of chaotic weather, he told the paper this particular storm was “absolutely terrible.”

Ross’ mom, Marybeth Ross, captured the rescue on camera. It occurred right before the Category 4 storm, with maximum sustained winds near 150 mph, made landfall.

Ross’ girlfriend, Megan Scavo, later shared the video of him wading through murky knee-high water to gently retrieve the frightened animal and bring it inside to safety.

“My boyfriend saving a cat from flood waters near Bonita Beach,” she captioned the video. Twitter users responded to the clip by essentially saying Ross was the cat’s pajamas.

Michael is a keeper! Not just grabbing the cat unceremoniously, though conditions certainly call for it. Instead, this man reaches over and reassures that baby they’re going to be okay. Gets trust from a wet, terrified, distressed cat in a hurricane! Definitely hero 🖤

Any guy, who would put himself in that situation, in order to rescue a helpless, scared kitty is a good guy and perhaps a keeper!

Bless your boyfriend! That poor scared cat! So many poor animals get left behind and no one considers their lives are also in danger! Please stay safe! Your boyfriend and the kitty both look like keepers!!

TELL YOUR BOYFRIEND IM SENDING HIM A CASE OF BEER AFTER THIS!

I’m sorry, Megan, but he is everyone’s boyfriend now. I don’t make the rules. 🤷🏻‍♀️

Others remembered doing similar rescues themselves.

Hurricane cats are an old Florida tradition. We picked ours up a couple years ago during Irma. Cannot imagine this house without the Tripod. pic.twitter.com/S58MB4RqNV

Last year during Ida my daughter found a kitten. I fell in love with him, decided that was the last storm he’d ever experience outside. He was about 8 weeks. He’s a year old now, and his mama’s best friend. ❤️ pic.twitter.com/TNXrl19Zhi

Ross told the Post that that cat is staying with his family and they plan to keep it if they’re unable to find an owner.

Scavo posted an update to Twitter telling users that they are currently calling their “miracle cat” Ian. She also linked to a GoFundMe page to raise money to restore their home and others’ houses that were damaged in the storm. She said half of the proceeds would go toward the Humane Society Naples in honor of Ian the kitty to help other animals impacted by the crisis.