Many of These Plants Older Than Dinosaurs Face Extinction 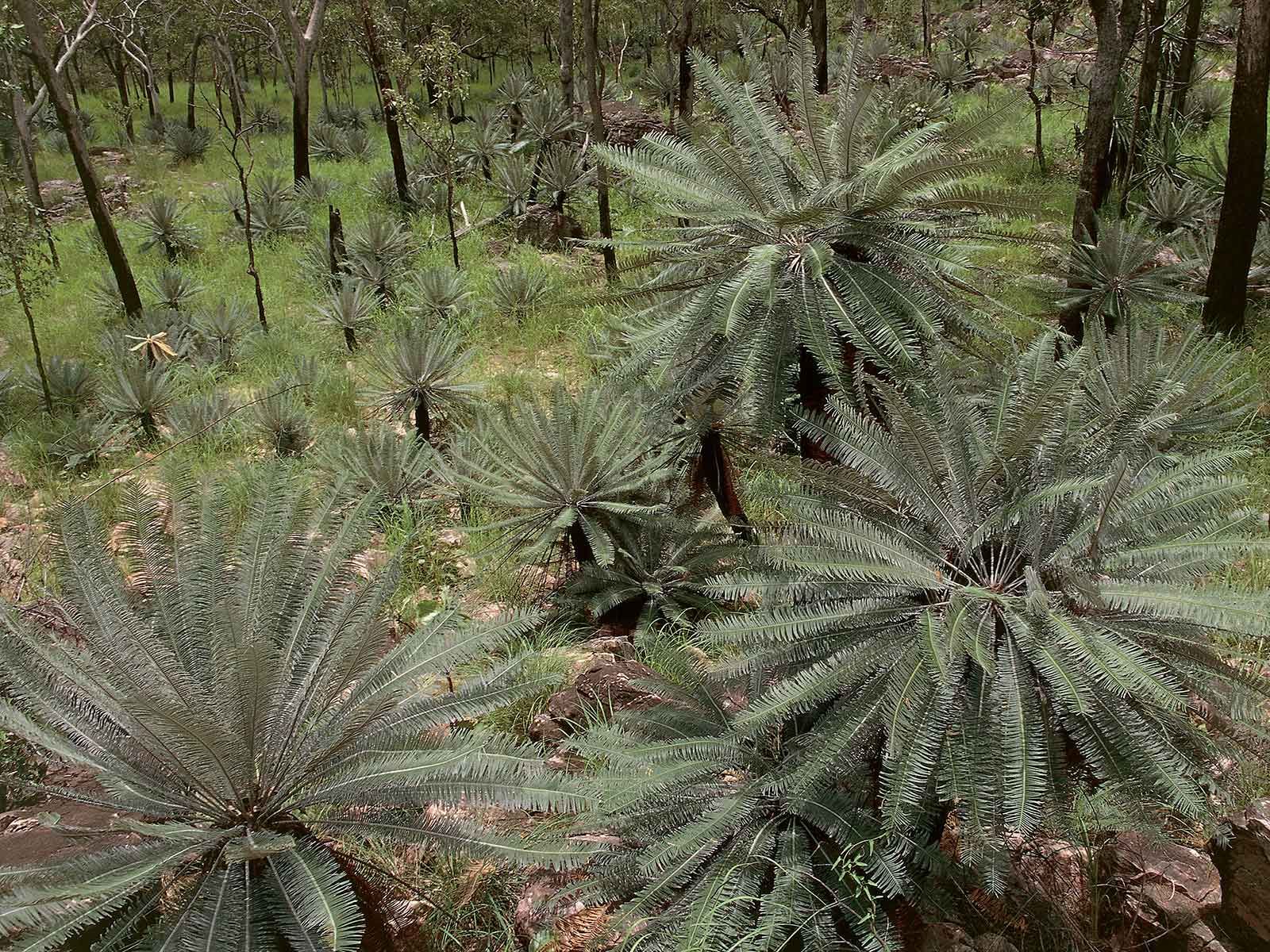 Simply looking at a cycad can take you back in time. The rough, stout trunk rising into a spray of stiff, palm-like leaves can feel better suited to the Late Cretaceous than our modern world, as if a horned dinosaur might amble up to shear off a mouthful of the tough vegetation. But while cycads have been around for a very long time, they are hardly living fossils. Cycads have undergone dramatic changes through their storied historyâ€”and it may be up to us to save them. Despite surviving multiple mass extinctions, many cycad species are in danger of disappearing because of humans. Weâ€™re not only altering the habitats where these resilient plants grow, but a growing trade in rare and endangered cycads is threatening to erase plants that have flourished for millions of years.

Cycads predate even the earliest dinosaurs. Around 280 million years ago, in whatâ€™s now Brazilâ€™s ParanÃ¡ Basin, there grew a plant with a tough, scaly outer coating. Paleobotanists know this plant as Iratinia australis, the oldest-known cycad. â€œThese fossils already have many of the characters seen in living cycad families,â€ says Mario Coiro of the Ronin Institute, â€œthough in unexpected combinations.â€ This early flowering of cycads is part of a paleobotanical story that involves plants that are unfamiliar to our modern eyes. â€œWe know they are related to other interesting lineages of plants, like seed ferns, that are all extinct now,â€ says Universidad de Antiquia botanist Cristina Lopez-Gallego. Yet cycads didnâ€™t meet immediate success. The plants survived the worst mass extinction of all time at the end of the Permian Period, 252 million years ago, before proliferating alongside early dinosaurs and mammals in the Triassic.

At a glance, cycads might not seem all that different from a small palm tree or other familiar plants. But appearance can be deceiving. Cycads are technically gymnosperms, the broad family of plants that includes conifers. Somewhat like a pine, cycads bear cones that hold their seedsâ€”structures technically known as stobili that grow in the center of the plantâ€™s crown. Some cycads are small, growing only a few inches off the ground, while others can tower over your head. Still, the pineapple-like shape, frond-like leaves and cones have been a mark of cycads for a very long time.

Between 200 and 66 million years ago, especially, cycads were seemingly everywhere and certainly were fodder for many a dinosaur. Paleontologists have even speculated that dinosaurs helped the spread of cycads by eating the fruits of these plants, including the seeds inside. The creatures might have dropped embryonic cycads in new places, complete with some fresh fertilizer to aid their growth. The plantâ€™s longstanding record and frequent use as window-dressing in paleoart leads to the impression that cycads have stodgily been in evolutionâ€™s slow lane ever since, but botanists are finding that these plants have been much more responsive than anyone appreciated.

In a 2011 study, Royal Botanic Garden Sydney cycad expert Nathalie Nagalingum and colleagues found that cycads have been responding to changes in Earthâ€™s climate and evolving rapidly to keep up with our changing planet. About 300 living species of cycad now exist, but most of them are not older than about twelve million years. What we are seeing is a diversification of cycads that happened much closer in time to us than the cycads that lived in forests stalked by Allosaurus back in the Jurassic. Cycads thrived in the Mesozoic, fell back after the mass extinction that ended the Age of Dinosaurs, and then burst forward again within the past twelve million yearsâ€”perhaps thriving in tropical environments with just the right combination of heat and rainfall. Rather than being dependent on the dinosaurs, the evolution of cycads has ebbed and flowed according to broader factors like climate and shifts between wet and dry seasons. In fact, Coiro notes, cycads alive today grow in a broad range of habitats and come in many shapesâ€”a testament to how these plants have kept changing with the times.

But despite their long history as survivors, cycads are struggling to survive in the modern era. â€œCycads are the most threatened group of organisms assessed to date,â€ Lopez-Gallego says. About 62 percent of known cycad species are listed on the IUCN Red List, a catalog of species that are edging dangerously close to extinction. That figure represents dozens and dozens of species, and those plants are finding it hard to hang on because of us.

Cycads are under pressure for a number of reasons, and our impact on these plants has often been direct. â€œMost species are threatened by habitat destruction and degradation,â€ Lopez-Gallego notes. In 2016, botanists reported that cycads of the protected genus Encephalartos were found at markets in South Africaâ€”likely due to their use in traditional medicineâ€”despite regulations on harvesting. Many endangered cycads are also exported from countries like South Africa to fuel a private collectorsâ€™ market where increasing rarity is only seen as a way to ramp up a stolen cycadâ€™s value.

â€œThreats from unsustainable human activities can drastically alter populations and habitats at a very fast pace,â€ Lopez-Gallego says, â€œwhich canâ€™t be compared to the natural events that cycads have experienced in their evolutionary history.â€ If a poacher finds a small population of cycads somewhere, Coiro says, that population can quickly be devastated by collectors given how long it takes for cycads to grow and reproduce.

As fast and jarring as the three mass extinctions cycads endured were, humans are cutting back these ancient plants even faster. Fortunately, Lopez-Gallego notes, there are conservation initiatives in place in Africa, the Americas and Asia to save what cycads remain. Locally-based conservation programs in places like Uganda have formed partnerships between researchers and individuals who live where cycads grow to help preserve a place for these plants. And collections-based research like gene banks can allow cycads to be cultivated by researchers and reintroduced to places where they vanished. Cycads were able to survive for 280 million years without us, but now these spiky and storied plants need our help.