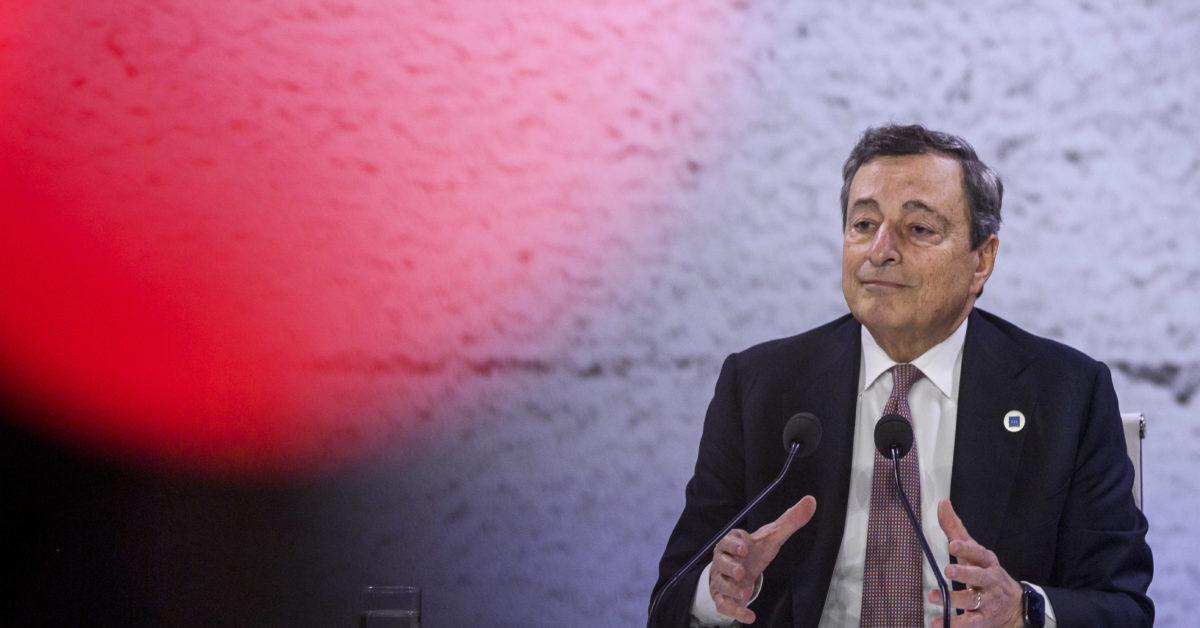 Mujtaba Rahman is the head of Eurasia Groupâ€™s Europe practice and the author of POLITICOâ€™s Beyond the Bubble column. He tweets at @Mij_Europe.

For a while now, Italy has been a boring story. Since becoming prime minister, Mario Draghi has moved steadfastly to articulate and implement reforms in exchange for Italyâ€™s â‚¬191.5 billion in EU pandemic recovery funds. But things are about to get interesting again. Â

Italyâ€™s political world is consumed with horse-trading over the election of the countryâ€™s next president, with the incumbent Sergio Mattarella seemingly determined to avoid a second term once his current one runs out in late January. The bookmakersâ€™ favorite at 17-10? Draghi. But the choice for him is neither easy nor obvious â€” and it could carry big ramifications for Italy, and for Europe.Â

If Draghi were to run for president, he would easily command sufficient support from political parties on both the left and right. The three leaders of the populist parties â€” Giuseppe Conte of the 5Star Movement, Matteo Salvini of the League and Giorgia Meloni of Brothers of Italy â€” have all suggested that they could support him.Â

They have many motivations to do so. The most important being their fear that Draghiâ€™s preeminence and authority is weakening their parties and sucking all the oxygen out of political debate. Both 5Star and Salviniâ€™s League have lost support as part of the grand coalition, where parties have struggled to maintain an identity and have repeatedly been forced to compromise, including giving way on some of their flagship policies, such as justice and early pensions, which they had put into effect when in government in 2018 and 2019.Â  Â

For Meloni and Salvini, an additional incentive is that supporting the winning candidate, and an establishment candidate, will boost their credibility when it comes to forming a government after the next general election, which the right is likely to win.

The president in Italy has more power than many European heads of state, including significant leeway in appointing a prime minister and approving ministers on the indication of the prime minister. Not supporting Draghi if he runs for president could therefore be seen as unwise. Â

For Meloni in particular, who has thrived in opposition, there is the further consideration that Draghiâ€™s departure from the prime ministerâ€™s office in Palazzo Chigi would necessitate a replacement, leading to a weaker government and making early elections slightly more likely â€” elections in which she is expected to make huge gains.Â

On the other hand, former Prime Minister Enrico Letta, who now leads the center-left Democratic Party, would prefer Draghi to stay in power as prime minister until 2023 to further advance recovery fund reforms. This position reflects the fact the Democratic Party has benefited from being the faction most closely aligned with Draghiâ€™s policies, performing well in recent local elections and taking control of Italyâ€™s five major cities. But even Letta would support Draghi if it looked like he would win. Backing the winning horse is always important in politics.Â

Yet while the job is probably there for him should he want it, Draghi continues to send ambivalent signals, repeatedly refusing to be drawn into the debate and declining to answer questions on the topic â€œout of respectâ€ for the incumbent. But he has also been careful not to rule himself out.Â

Draghiâ€™s calculations are likely tied up with an assessment over which role â€” prime minister or president â€” will better enable him to anchor Italyâ€™s reforms and steer the country onto a virtuous path of growth.Â

Governing is becoming increasingly difficult as the parties seek to increase their visibility, opposition rises over the budget and the likelihood of a tough winter increases, between an uptick in COVID-19 cases and resistance to new restrictions. Draghi could be reaching the end of his honeymoon period as head of the coalition.Â

He may therefore prefer to move into a presidential role before things take a turn for the worse, as they did for technocratic Prime Minister Mario Monti at a similar point in his government â€” a fate Draghiâ€™s advisers say he is keen to avoid. This would seem to put paid to a scenario mooted by some, such as Confindustria President Carlo Bonomi, that would see Draghi continue in his current office and return as prime minister with the support of several parties after elections in 2023.Â

If Draghi were to run for and be elected president, his ultimate goal would then be to ensure a close ally â€” what some in Rome describe as a â€œDraghi avatarâ€ â€” ultimately succeeds him. This would likely be an individual with the profile of economy minister Daniele Franco, who has worked closely with Draghi both at the Bank of Italy and in government on the recovery plan and economic reforms, or former Vodafone CEO and digitization minister Vittorio Colao. Â

While they could, in theory, guarantee the continuity of the reforms set in motion by Draghi and oversee the implementation of the recovery plan until the end of the legislature in 2023, in practice, Franco â€” or any â€œDraghi avatarâ€ â€” would lack their predecessorâ€™s moral authority and would struggle to keep the coalition in check and reforms on track.Â

One key consideration for MPs as they cast their secret ballot will be their desire to avoid early elections, as a parliamentary reform in 2020 means one-third of parliamentary seats will now be slashed in the next legislature.

5Starsâ€™ current poll ratings, which have halved since elections in 2018, suggest that they might lose nearly three-quarters of their current seats. In fact, all parties, except for the Brothers of Italy, stand to lose seats after the next election, so backbenchers who donâ€™t expect to be reselected will be tempted to vote for any candidate who they think guarantees that the legislature continues to 2023.

Even Salvini will want some time to improve his standing and his partyâ€™s polling before an election is held, or risk ceding the leadership of the right-wing alliance to Meloni.

Some parliamentarians could therefore decide not to vote for Draghi, fearing that his departure from government will destabilize the current coalition and trigger elections.

Staying on as prime minister, however, is no guarantee of stability. The maneuverings over the presidency could cause tensions in the ruling coalition, leading to a reconfiguration and possible cabinet reshuffle. And with another election required to be held before the middle of 2023, the political jostling will only get more violent.Â

Draghiâ€™s decision â€” and that of MPs â€” will therefore not be an easy one to make. Far from boring, it looks as if Italian politics is about to become very lively once again.