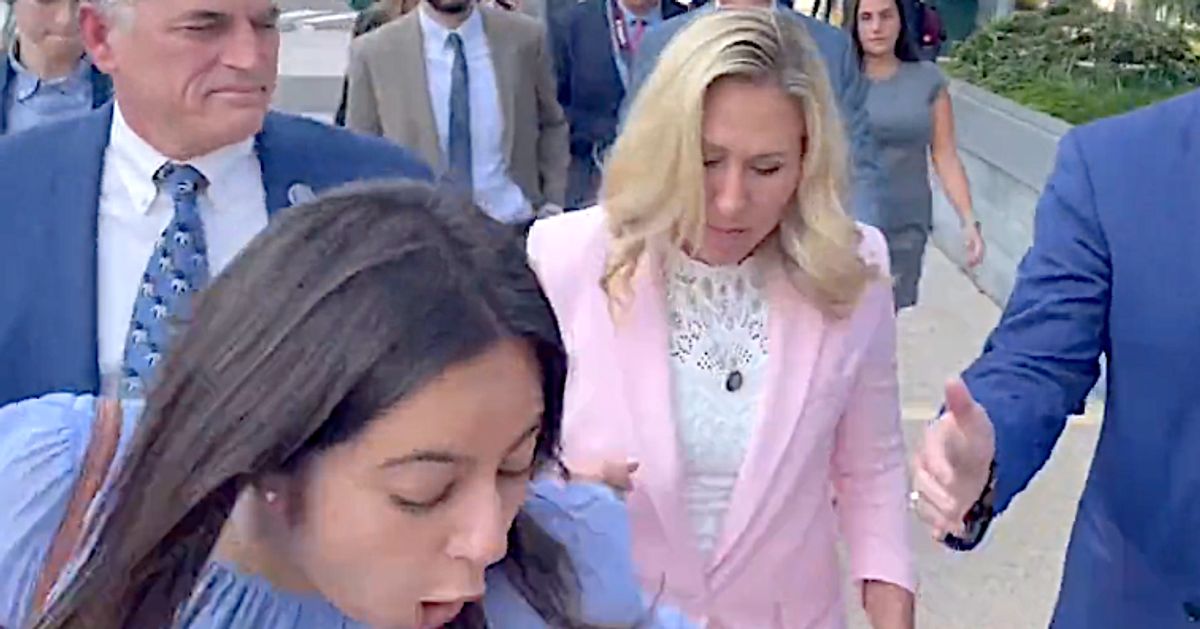 Rep. Marjorie Taylor Greene (R-Ga.) was accused of kicking a teen activist outside the Capitol on Thursday.

In a confrontation captured on video that Greene posted on her own Twitter account, the extremist Republican can be seen making physical contact with Marianna Pecora, 18, during a sidewalk argument over gun violence.

“Oh my God,” says a stunned Pecora, the deputy communications director of the Gen Z group Voters of Tomorrow. She later tweeted: ”@RepMTG just kicked me.”

The clash occurred as Pecora and Santiago Mayer, the founder of Voters of Tomorrow, confronted Greene about gun violence following her appearance at a news conference held by members of the right-wing House Freedom Caucus.

Greene appears to make a motion with her leg, and Pecora, walking in front of Greene, stumbles forward.

These foolish cowards want the government to take away guns & the rights of parents to defend their children in schools.

You have to be an idiot to think gun control will create a utopian society where criminals disarm themselves and obey the law.

Pecora later tweeted: “I’m so sorry but I don’t think it’s unreasonable to expect members of Congress to not kick an 18-year-old citizen.”

I’m so sorry but I don’t think it’s unreasonable to expect members of Congress to not kick an 18 year old citizen.

Members of the group hadn’t decided whether to pursue legal claims against Greene, Mayer said.

“To answer the most prevalent question about pressing charges: We’re talking to our legal team and keeping our options open,” Mayer wrote on Twitter.

Others on Twitter urged that Greene be held accountable. A lawyer offered to help.

Appreciate all the DMs and text messages, y’all. Slowly working through them.

To answer the most prevalent question about pressing charges: we’re talking to our legal team and keeping our options open.

Marge wants to press charges when someone takes one of her sticky notes off the wall in front of her office. Do it!

Saw the side view video of MTG making a forward kick move & the front view video of your staffer reacting to being kicked…it’s pretty damn clear what occurred.

The video shows Greene increasingly infuriated as the activists argued with her. As she walked with staff members, Greene called Mayer a “coward,” and accused him of “abusing children” after he said Greene was “helping children get shot in school” by promoting guns.

She told Mayer he should “go back” if he “doesn’t like it here.” Mayer was born in Mexico and founded Voters of Tomorrow when he was 17, The Washington Post reported.

Greene did not directly address the accusation that she kicked Pecora.

Just like I said, he’s a paid political activist, who just so happens to be blessed to have immigrated to our great country.

He should respect and be grateful for American freedoms, like our 2A, instead of trying to destroy them.

If he doesn’t like it, he can go back. https://t.co/avBbGejOaG pic.twitter.com/DY1ReCPJQS

Pecora, a college freshman, told the Post that her clash with Greene was unlike anything she had experienced in conversations with other lawmakers, who she said took her group’s arguments seriously and treated its members with respect.

“It’s honestly, like, really disheartening to think that a bunch of kids can hold themselves with better composure than a sitting member of Congress,” Pecora told the Post.

“We’ve been sitting in meetings all week with both Democrats and Republicans. Nobody has been anything but respectful,” she added. “Everybody has been just so incredibly attentive, and taken us seriously and had, like, really productive conversations with us. Except for Marjorie Taylor Greene.”