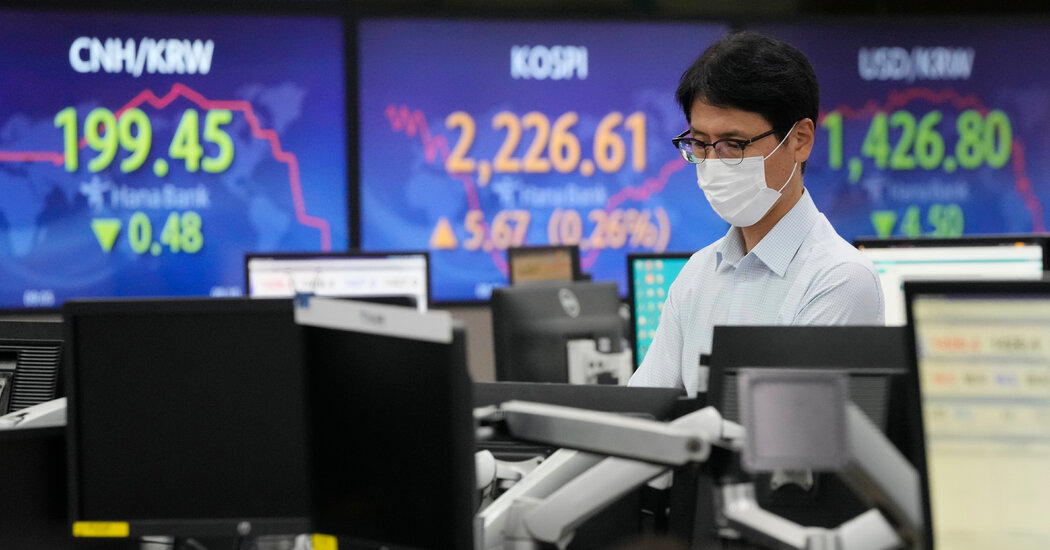 Markets around the world tempered on Tuesday after days of worrisome economic news and rising interest rates had driven down shares.

After earlier gains, shares of the S&P 500 fell more than 0.13 percent by midday Tuesday. Monday’s losses pulled the index down to its lowest level of the year. The Dow Jones industrial average also lost about 0.26 percent, after ending Monday in a bear market.

A price bounce is common after such a relentless period of selling, as traders step back to reassess the outlook. Despite this morning’s gains, the mood across Wall Street remained sour on Tuesday, as investors parsed the likelihood of another move lower for stocks in response to central banks around the world raising interest rates to combat inflation, slowing the global economy.

“It’s looking very clear now that the major central banks are not going to blink in bringing down inflation at the cost of growth,” said Rob Subbaraman, head of global macro research at Nomura.

In Britain, the center of financial turmoil in recent days, the FTSE 100 closed down 0.52 percent following the rout that accompanied the announcement on Friday of a sweeping government plan to cut taxes, funding by increased borrowing.

The British pound gained about 1 percent against the dollar, trading at around $1.08, on the day after it touched a low.

Oil prices regained some lost ground, with the price of West Texas Intermediate crude, the U.S. benchmark, rising 1.54 percent, to about $8 a barrel.

Investors are concerned about the increasing likelihood of a recession, as central banks continue to raise interest rates. Several central banks, including the Fed and the Bank of England, raised rates last week, with more increases in store. Charles Evans, the president of the Federal Reserve Bank of Chicago, said in a speech on Tuesday that “we will need to raise rates further and then to hold that stance for a while” to tame inflation, which is running far above the central bank’s target.

Analysts have said that recession appears more likely for the United States, Europe and Britain in the coming quarters. “I’m more worried about Europe than the U.S. in terms of the depth of the recession,” Mr. Subbaraman added.

Raphael Bostic, the president of the Federal Reserve Bank of Atlanta, said on Monday that the British government’s new policies added uncertainty to the global economy.

The severe market reaction to the proposals reflects a fear that the “new actions will add uncertainty to the economy,” Mr. Bostic said in an interview at a Washington Post event. In the United States, “the key question will be, what does this mean for ultimately weakening the European economy, which is an important consideration for how the U.S. economy is going to perform.”

When asked whether the instability emanating from Britain increased the chance of a global recession, Mr. Bostic said, “I think it doesn’t help it.”