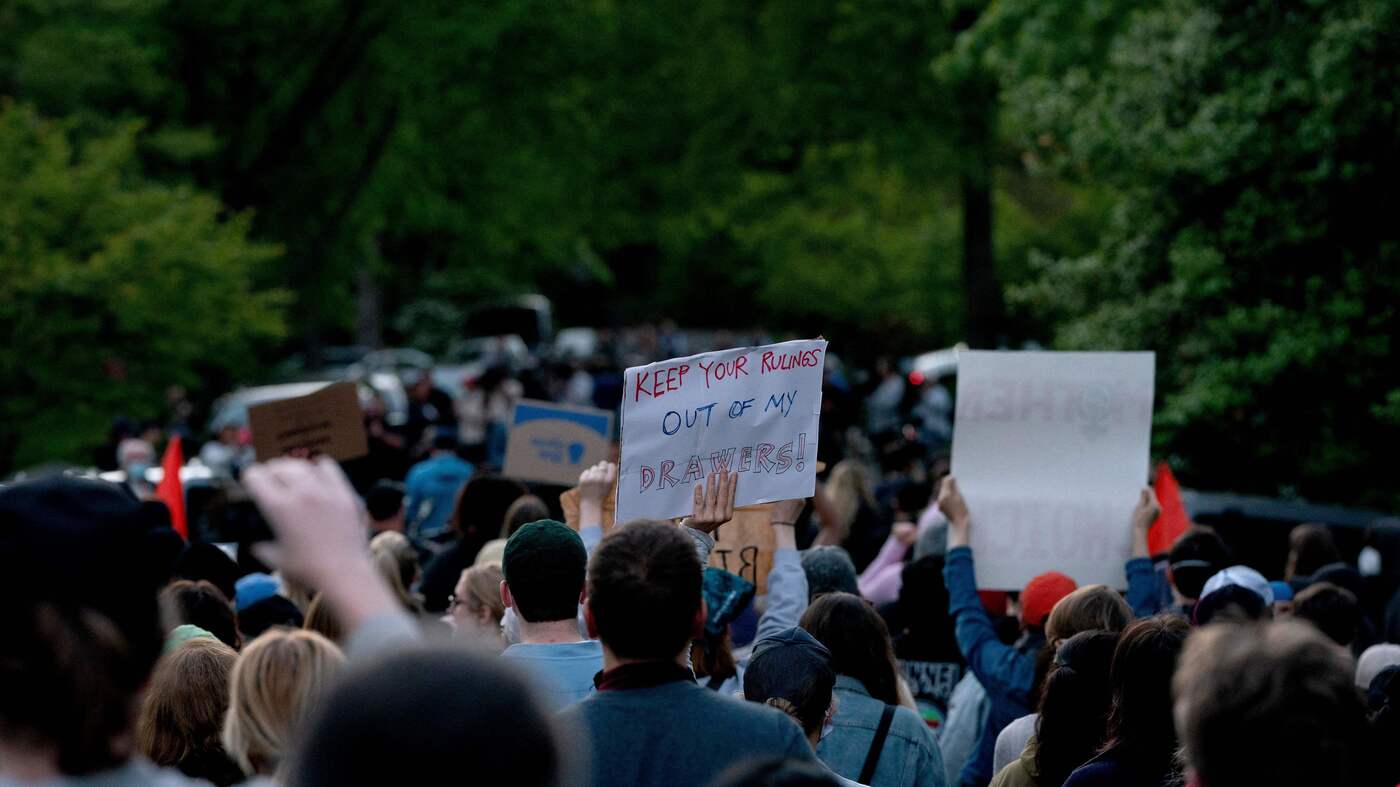 Abortion-rights demonstrators march to the house of Supreme Court Justice Samuel Alito in Alexandria, Va. The governors of Virginia and Maryland are calling on the Justice Department to tighten security at the homes of the Supreme Court justices who live in their states, as abortion-rights supporters continue to protest.

Abortion-rights demonstrators march to the house of Supreme Court Justice Samuel Alito in Alexandria, Va. The governors of Virginia and Maryland are calling on the Justice Department to tighten security at the homes of the Supreme Court justices who live in their states, as abortion-rights supporters continue to protest.

Following a week of protests after the leaking of a draft Supreme Court opinion that would overturn Roe v. Wade, the governors of Maryland and Virginia are urging the Justice Department to provide security at the homes of the Supreme Court justices who live in their states.

In a letter sent to U.S. Attorney General Merrick Garland, Gov. Larry Hogan of Maryland and Gov. Glenn Youngkin of Virginia called on the Justice Department to send adequate resources and tighten security for the justices.

The governors hope that doing so will keep the conservative justices and their families safe as abortion-rights supporters continue to protest outside their homes.

Hogan and Youngkin, both Republicans, said the recent demonstrations outside the houses of the justices — Chief Justice John Roberts and Justices Brett Kavanaugh, Samuel Alito and Amy Coney Barrett — are “markedly different” from those taking place on the steps of the Supreme Court or at other public spaces.

Part of the reason for the difference is a law passed in 1950 during the Truman era when Congress was worried about picketing and parading around the justices’ houses. This is a law that Margaret Russell, associate professor of constitutional law at Santa Clara University in California, is familiar with.

“There is a lot of protection under the First Amendment for picketing on public sidewalks, for marching, protesting — and that includes public sidewalks in the neighborhoods where these individuals live,” Russell told NPR.

What is prohibited under the law, however, is targeted picketing, she said.

“Whether that is stopping outside of someone’s house and actually seeking to have an impact on that person … the law is pretty clear on that,” Russell said.

Today, @GovernorVA and I sent a letter to Attorney General Merrick Garland calling on the Department of Justice to provide adequate resources to keep the Supreme Court justices and their families safe amid ongoing protests at their homes. pic.twitter.com/6D0bMGSp3q

The governors said they want federal law enforcement to take the lead in protecting the justices in the weeks and months ahead as protests continue.

“It is critical that our Department acts to preserve the safety and standards of the highest court in the land. There is simply too much at stake,” Hogan and Youngkin wrote.

The governors emphasized in their letter that under federal law, anyone who “pickets or parades” inside or outside a building or residence of a judge with the “intent of influencing” the judge can be fined and/or face up to a year in prison.

Justice Department spokesman Anthony Coley released a statement Wednesday in regards to security for the Supreme Court and the justices:

Demonstrations taking place outside the homes of the justices come after a draft majority opinion was leaked last week suggesting the Supreme Court may overturn the 1973 Roe v. Wade decision that legalized abortion across the United States.

On Thursday, Senate Minority Leader Mitch McConnell defended the Supreme Court’s potential move to issue rulings that are in conflict with a majority of Americans’ views on abortion rights. In an interview with NPR’s Deirdre Walsh, McConnell said that this is a feature of the system.

“So for the Supreme Court to on any issue, to reach a decision contrary to public opinion, it is exactly what the Supreme Court is about,” he said. “It’s to protect basic rights, even when majorities are in favor of something else — that happens all the time.”