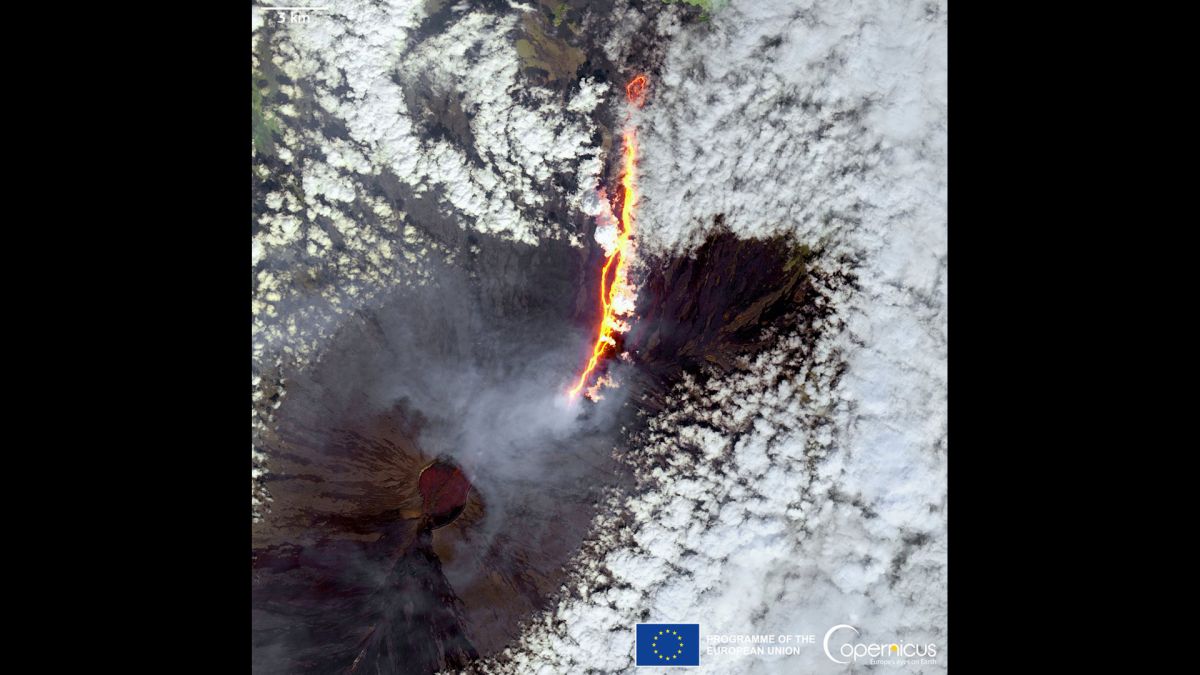 Satellites keep watching as the Mauna Loa volcano on Hawaii’s Big Island continues spewing geysers of boiling lava and plumes of toxic volcanic ash over a week after it woke up from a nearly 40-year sleep.

The volcano, whose peak stands 2.5 miles (4 kilometers) above the choppy waters of the Pacific Ocean, rises from depths of over 3 miles (5 km) under the sea surface, making it the highest volcano in the world. This giant had previously been active on average every five years, but had laid dormant since 1984. This lengthy sleepy period ended abruptly on Nov. 27, when a new fissure opened in Mauna Loa’s summit caldera, or crater, and began spurting walls of lava into the height of up to 150 feet (40 meters).

Earth-observing satellites have since been snapping the progress of the eruption and measuring the content of the toxic smoke that escapes from the volcano’s insides, which, in some cases, might affect Earth’s climate.

According to a statement (opens in new tab) by the United States Geological Survey (USGS), Mauna Loa has been emitting between 133,000 and 200,000 tons (120,000 and 180,000 metric tonnes) of sulfur dioxide per day into the air since the eruption started. Sulfur dioxide air pollution at the ground level irritates humans’ respiratory tracts, which can lead to an increased risk of infections.

At higher altitudes, above 9 miles (15 km), sulfur dioxide can affect Earth’s climate by reflecting sunlight away from Earth.

Powerful explosive volcanic eruptions containing high amounts of sulfur dioxide, such as the 1991 explosion of Mount Pinatubo in the Philippines, can temporarily cool Earth’s climate. Mauna Loa’s eruptions, however, have not yet displayed the force needed to inject sulfur dioxide into such high altitudes, meaning the effects of the smoke will mostly be felt on the ground, according to the USGS.

Europe’s Copernicus Atmosphere Monitoring Service released forecasts (opens in new tab) of the spread of the volcanic smoke, which show the cloud traveling eastwards toward the U.S. West Coast, crossing the southern United States and swirling above the Carribean and countries of central America.

Copernicus said in a statement that the volcanic cloud spreads “well above the surface, with no significant incidence on air quality or other major impacts in the atmosphere, as for 5 December 2022.”

In spite of that, the Hawaiian Department of Health released an air quality warning, stating that the eruption might lead to “[volcanic smog] conditions, ash in the air,” and fluctuating levels of sulfur dioxide in the atmosphere with localized areas of significant air pollution.

Fortunately, the eruption remains constrained to the volcano’s summit, according to USGS, with no threat to inhabited areas so far. Lava from the volcano is reaching the Daniel K. Inouye Highway, a main thoroughfare traversing the Big Island, according to a UGSG statement, but it is not clear yet whether and how much it might damage the road. Hawaii has activated the Hawaii National Guard in order to assist with traffic control, according to Hawaii’s Emergency Management Agency (opens in new tab).

USGS seismic detectors continue picking up mild earthquake signals, suggesting molten rock is still rising up the fissures in the caldera. The agency said it expects the eruption to continue for as long as the signal is measurable.