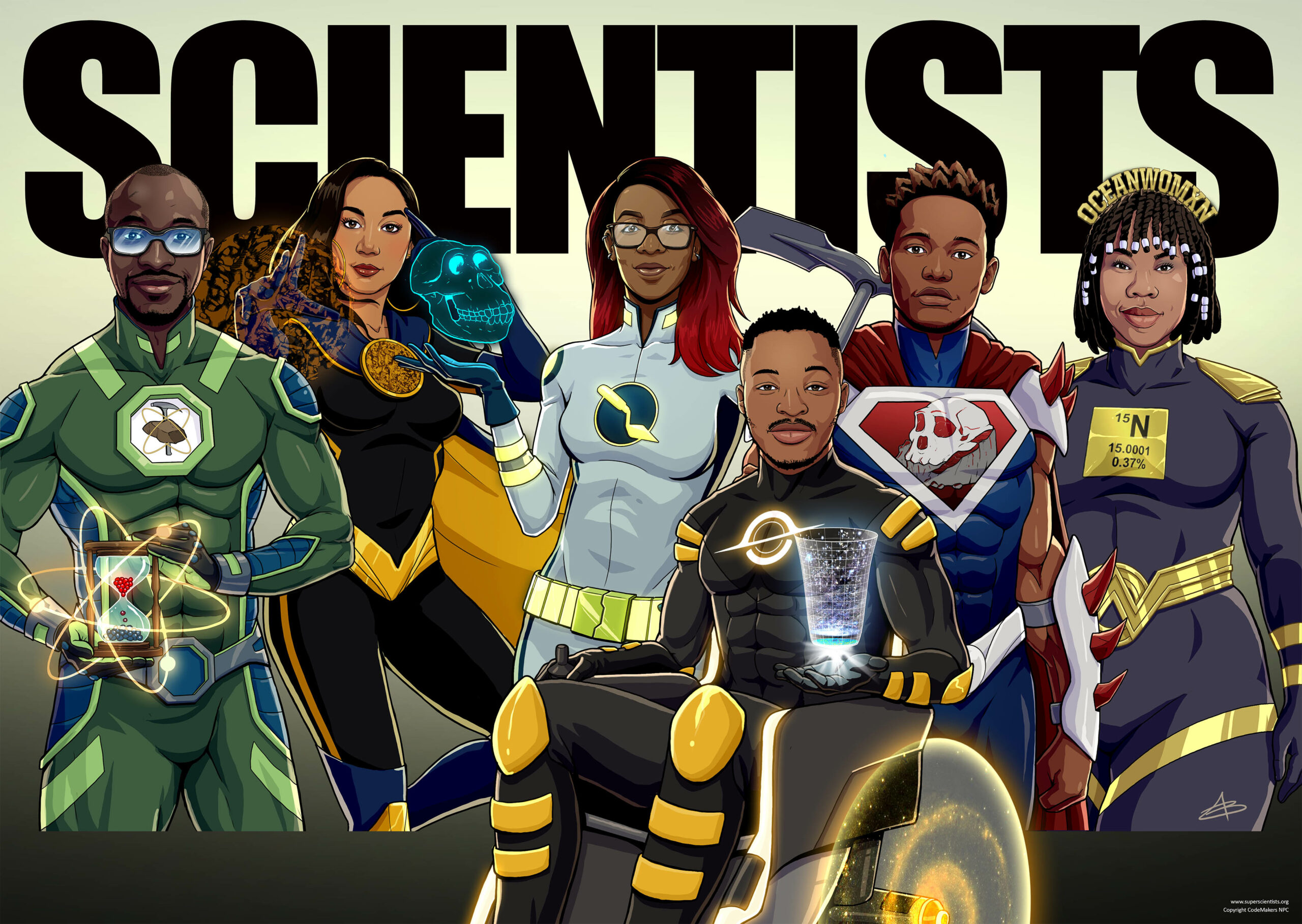 Mpho Kgoadi remembers waking up at 5am every Saturday to watch his favourite superhero series, X-Men. As an 11-year-old, he would be riveted by the extraordinary powers of the mutant squad, especially Professor X, the paraplegic founder of X-Men. Being transfixed by his superhuman abilities on screen allowed Kgoadi, who grew up in the township of Wattville on Gauteng’s East Rand, to draw parallels with his own disability.

“The entire cast of X-Men is so relatable but the obvious choice is Professor X because of his struggle to choose between his legs and his mental prowess,” says Kgoadi, now an astrophysicist and PhD candidate at the University of the Witwatersrand. “I draw a lot of inspiration from X-Men to see how people who are ‘outcasts’ have such a positive impact on society and are not just seen as differently-abled.”

As a child gazing up at the night sky wondering about the future, he never imagined that he, too, would be immortalised as a Marvel-style superhero through the nonprofit SuperScientists programme, which features 49 local scientists in the marine, biomedical, astronomy, maths and palaeo sciences.

By appealing to young peoples’ love of comic heroes, the programme is designed to inspire children to see themselves in the faces and stories of scientists working today, who are profiled through trading cards, posters, calendars and activity books.

As Cosmic Dawn, Kgoadi’s superpower is observing the dark matter that makes up most of the universe and studying its influence in the early universe 12-billion years ago.

“I grew up watching superhero movies and fantasising about this specific moment in my life. To be a superhero in this kind of way is something I never expected and it’s an absolute honour,” Kgoadi says.

Everyone loves a good fictional superhero who can shrink down to the quantum realm or jump over a building in a single bound. But “real scientists, real people, have just as amazing powers”, according to SuperScientists.

“Scientists can see individual atoms within a molecule, read the DNA of a single cell in a tumour and peer back in time to when black holes collided. They have saved millions of lives through their research and technological advances and are solving questions today that people have asked for millennia.”

But young people in South Africa, for the most part, don’t know a scientist, says SuperScientists founder Justin Yarrow, who runs the science education nonprofit Codemakers.

“The image in their head is Einstein, a ‘mad’ scientist, and not someone they can relate to. The phrase, ‘you can’t be it if you can’t see it’ is really quite true. Representation matters and so, when young people can’t connect a name and face to these careers, it limits their imagination to see themselves in them,” he said.

Yarrow’s spark of genius came when he noticed how children in the Codemakers programme — and his own children — were captivated by Super Animals, Pick n Pay’s collectable trading cards.

“They were learning about African animals and that’s brilliant, but I was just like: ‘Ha, wouldn’t it be cool if we could use that same approach for learning about science and scientists?’ ”

His idea blasted off and in the past two years, more than 15 000 trading cards, posters, an activity book and a calendar have been distributed to young people, schools, community centres and clinics, with more offerings in the works.

Even though he had his own children, Yarrow didn’t realise how much young people live in a superhero world filled with imagination and characters, whether on TV, in books, or on social media.

“They are incredibly social and yet when we teach science, we don’t connect them to the people and characters who are doing the work.”

To illustrate the achievements of homegrown scientists, the programme has drawn in artists including Curtis Bonhomme, Hero In My Hood, Venus Bambisa and Clyde Beech, who was part of the team behind the Kwezi and Supa Strikas comic books.

“My whole thing is about how do you decrease barriers to knowledge and get more young people engaged, whether it’s about making animations in their mother tongue about things that they care about, or having heroes that look like them, and maybe participating down the line in science and technology development rather than the standard people that have historically done that,” says Yarrow.

To represent who scientists can be, the SuperScientists programme features diverse scientists from South Africa, Ghana, Uganda, Kenya, Botswana, Zambia and Rwanda. This is important, Yarrow says, because racial and gender inequity is a problem in science, limiting who becomes a scientist and restricting young people “when they don’t see scientists who look like them”.

Explorer and paleoanthropologist Keneiloe Molopyane, whose SuperScientist alter ego is Bones, explains further: “We get to live in a different reality from everyday life through super­heroes and comics … and your imagination comes to life. What’s really nice about SuperScientists is that all these scientists look like the average South African. Any child of colour can pick up the cards or the poster and visualise themselves as that person.”

This, says the National Geographic, which has an Emerging Explorer programme of exceptional individuals in their fields, is crucial in the South African context “where scientists are not celebrated as celebrities”.

Molopyane says: “You grow up, especially for my generation, and you become a teacher, a doctor, a lawyer, or maybe an engineer. Then to have something as an archaeologist thrown in your face … to have another medium through which this field of science is expressed is wonderful.”

Oceanographer and University of Cape Town PhD candidate Kolisa Sinyanya, who is superhero Nitro, agrees. “There’s very few marine scientists that are black, especially black women … With Nitro being the character that portrays me, for some people it’s very overwhelming because they never had any role models to look up to. If they do, they don’t look like them. And that’s a very important thing to consider in a career — having someone look like you. That gives children hope.”

From her home in Umlazi in KwaZulu-Natal, Nothando Mndaweni runs a literacy programme for children in grades 4 to 7. It was there a year ago when she asked children if they knew what a scientist was.

“They couldn’t answer at all and I was quite surprised,” Mndaweni says. “What I discovered is the way that science is taught in township schools, the children only interact with science through taking notes off a chalkboard and parrot learning to pass their exams.”

Through SuperScientists, “children can connect what they learn at school with their everyday lives because science is all around us. Using superheroes makes it so much more real and relatable to the children.”

The children in the programme have started asking smarter questions about science, and for some, their marks have improved. “One big positive SuperScientists has made is the tremendous improvement in children’s special vocabulary, which is essential in building their comprehension skills. They’ve been introduced to words like oceanographer and phytoplankton.”

Gretchen Wilson-Prangley, the founder and chief executive of the nonprofit, Play Africa, says it has distributed SuperScientists materials as part of its programme.

“Play Africa’s ‘I am a Scientist’ programme is really aligned with the SuperScientists programme, because at Play Africa we’re trying to really inspire every child to open their minds and unlock their thinking around the possibilities for their future,” Wilson-Prangley says.

“A full 63% of the most visible scientists are white men, leading to a devastating misconception that science in South Africa ‘belongs’ to only a select part of the population,” Wilson-Prangley says.

Play Africa has embarked on a study with Stellenbosch University to test how children see scientists. “We’re using a methodology called ‘Draw A Scientist’ and we go into a classroom of grade 3 learners in Soweto or in the inner city of Joburg and ask them to draw a picture of a scientist doing science.

“What we found, surprisingly, is that children in grade 3 often don’t even know how to illustrate the stereo­type of scientists doing science. The term scientist doesn’t have a lot of reference images in their minds. So with SuperScientists, these kinds of interventions can make a difference in helping children identify with science in a new way.”