MEPs want EU leaders to answer for â€˜Sofagateâ€™ in Parliament 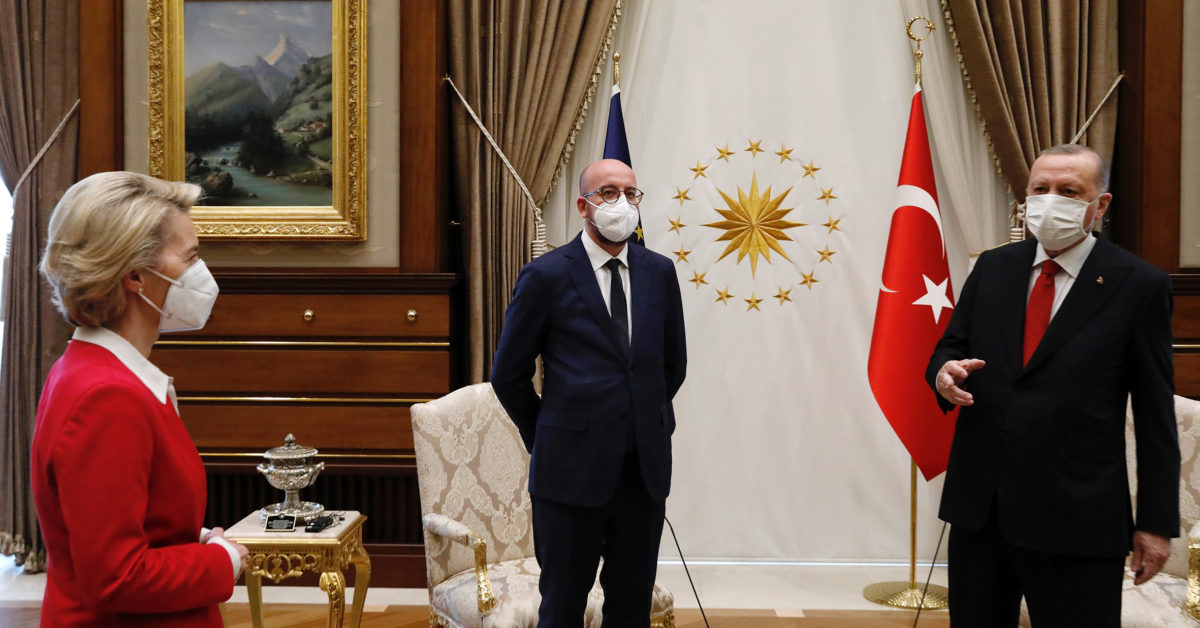 Von der Leyen was left standing on Tuesday during a meeting with Michel and Turkish President Recep Tayyip ErdoÄŸan in Ankara, when there were only two chairs set out for the three leaders. Von der Leyen retreated to a nearby sofa, an incident that prompted cries of sexism and left EU institutions squabbling in the press.

The â€˜Sofagateâ€™ snub ended up overshadowing the reason for the meeting: resuming coordination with TurkeyÂ on vital issuesÂ like migration and expanding the customs union.

On Thursday, Iratxe GarcÃ­a, the leader of the Progressive Alliance of Socialists and Democrats group tweeted that she had asked for a plenary debate with von der Leyen and Michel to â€œclarify what happened and how to respect the European institutions.â€

She added: â€œEU-Turkey relations are crucial, but #EU unity and respect for human rights, including womenâ€™s rights, are also key.â€

GarcÃ­aâ€™s call is supported by other Parliament leaders. On Wednesday, Manfred Weber, chairman of the European Peopleâ€™s Party group, similarly said he would request a debate to clarify the eventâ€™s circumstances.

The visit to Ankara â€œshould have been a message of firmness and unity of Europeâ€™s approach to Turkey,â€ Weber told POLITICOâ€™s Brussels Playbook. â€œUnfortunately, it has resulted in a symbol of disunity, as the presidents failed to stand together when it was needed.â€

Weber is seeking information about the meeting beyond the seating arrangement backstory. He wants to know what, if any, promises were made with Ankara. Tensions between the EU and Turkey have lessened after peaking last year amid Turkeyâ€™s provocative actions toward EU members Cyprus and Greece.

Weber said Parliament â€œneeds to know what was put on the tableâ€ during the gathering, â€œas the issues being mentioned need approval from the European Parliament.â€ In his own remarks, Michel said the two sides discussed topics like closer economic cooperation, financial help and visa liberalization.

â€œWe are extremely concerned commitments on visa or customs were made, without concrete and durable changes of Turkeyâ€™s policy in the Eastern Mediterranean, towards Cyprus and our external borders,â€ Weber said. â€œIn addition, the visit failed to show our wider concerns when it comes to President ErdoÄŸanâ€™s attacks on civil society and the political prisoners in the country.â€

Separately, Parliamentâ€™s liberal group, Renew Europe, will also request a debate on the Turkey visit, according to a spokesperson.

The party wants to know about the protocol fiasco, but also about â€œrelations with Turkey, human rights and the Istanbul Convention,â€ a European human rights treaty meant to combat violence against women that Turkey recently abandoned.

â€œWe are also going to suggest an inter-institutional reflection on the EU presence on the international stage, where we need coherence and credibility,â€ the spokesperson added.