Merkel got a call during Putin meeting. But who from? 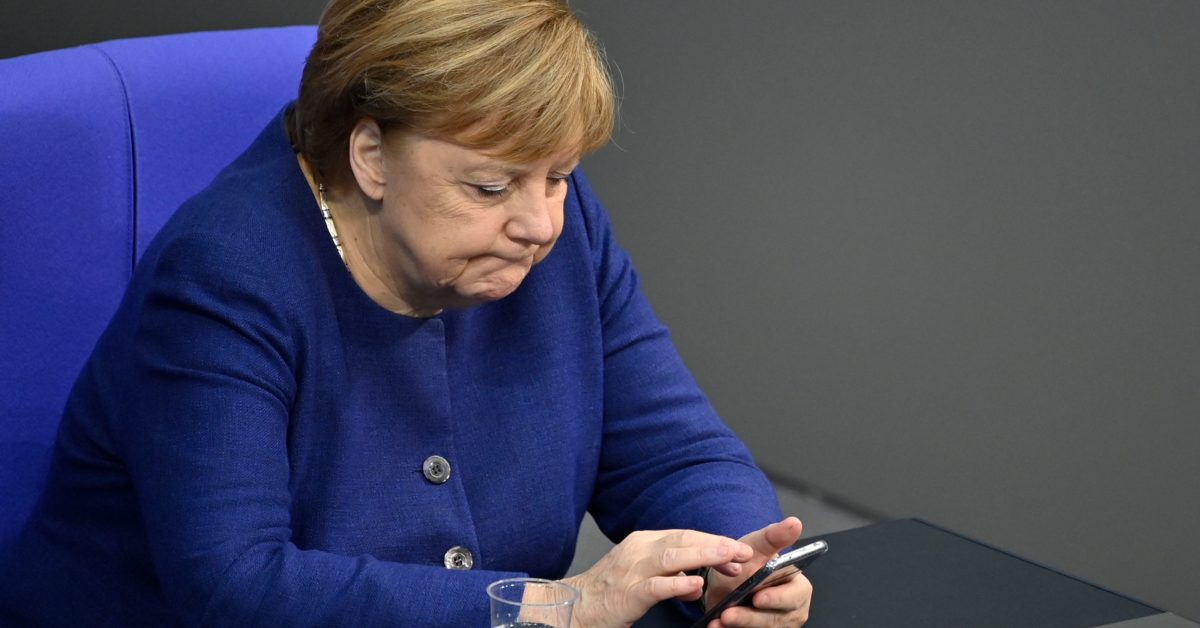 Itâ€™s the question on (almost) everyoneâ€™s lips: Who would dare call the most powerful politician in Europe during an important meeting with Vladimir Putin?

German Chancellor Angela Merkelâ€™s phone went off during talks with the Russian president on Friday in Moscow, with important subjects such as Afghanistan and Nord Stream 2 on the agenda. Merkel looked none too pleased, pulling the phone from her pocket, giving a disdainful glance and swiping the screen to end the call (or set up a date if it was actually Tinder, which it definitely wasnâ€™t). We also now know that Merkel has a fairly standard ringtone rather than David Hasselhoffâ€™s â€œLooking for Freedomâ€ or â€œThot Shitâ€ by Megan Thee Stallion.

No doubt Putin â€” who once brought his dog, Koni, to a meeting with Merkel with the express purpose of making her feel uncomfortable â€”Â was greatly amused.

So who called? Here are a few candidates.

The conservative candidate to replace Merkel as chancellor after next monthâ€™s German election has had a torrid time of late. Being caught laughing while on a visit to a flood-hit community was not a good look and he followed it with the indignity of being mocked by walking midlife crisis Elon Musk â€” lest we forget, a man who named his child X Ã† A-12. Perhaps Laschet was calling for advice to avoid another campaign trail gaffe.

The British foreign secretary might seem an unlikely candidate as the caller but he needs all the help he can get. Raab is under increasing pressure to quit after it was revealed that he delegated a phone call with the Afghan foreign minister to a junior staffer while on holiday in Crete. As part of the counter-offensive, a photo was released of Raab at his desk furiously working the phones (or furiously placing an order for pizza, itâ€™s not clear). Perhaps he was practicing calling Merkel.

The president of UkraineÂ could have been checking in with Merkel ahead of their meeting at the weekend (â€œHi Angela, just confirming my Outlook calendar inviteâ€). Or he could have been hoping to disrupt her chances of success talking to his arch-enemy Putin â€” like calling your secret crush when sheâ€™s on a date with a guy you hate.

Could it have been a certain former president of the European Commission? Back in 2017, at a press conference in Brussels, Junckerâ€™s old Nokia phone rang. Juncker presumed it was his wife calling, and unlike Rudy Giuliani, who famously answered the phone when his wife called in the middle of aÂ 2007 campaign speechÂ to the National Rifle Association, Juncker declined the call. Juncker quickly realized it was Merkel, not his wife, that he had snubbed. Was this revenge?

Merkelâ€™s predecessor certainly knows his way around a Russian meeting room. Perhaps he was offering her a job alongside him on the Nord Stream board.

No, they wouldnâ€™t, would they? Not while she was in the room?