Michael Gove: No Brexit talks next year if negotiations fail 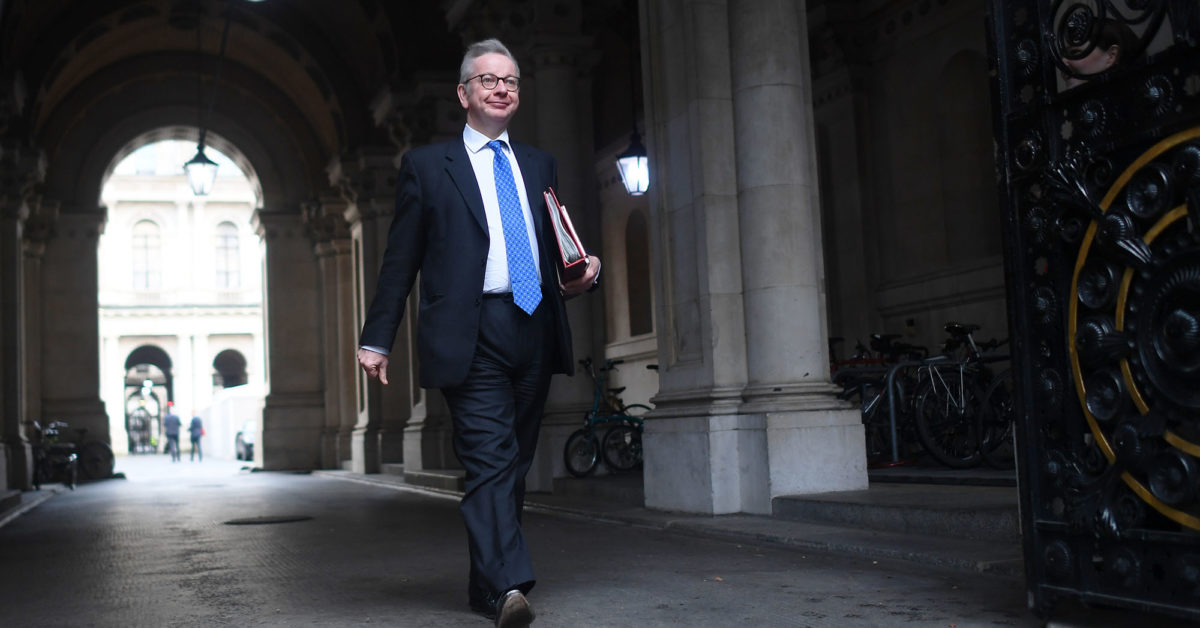 The EU and the U.K. are in the last phases of trade negotiations, but Gove told MPs Thursday the chances of a deal are currently â€œless than 50 percent.â€

â€œThat would be it. We would have left on WTO [World Trade Organization] terms,â€ he told the House of Commons Brexit committee. â€œIt is still the case of course that there would be contact between the U.K. and European nations and politicians as one would expect. But what we would not be doing is attempting to negotiate a new deal.â€

The U.K. takes a â€œpositive viewâ€ of the European Commissionâ€™s proposed contingency measures for fisheries, road and air transport in the event of a no-deal end of the Brexit transition period, Gove added.

The Commission last weekÂ releasedÂ proposals to ensure basic air connectivity between the EU and the U.K. for six months if talks fail, providing the U.K. offers the same. The EU also wants to continue reciprocal access for EU and U.K. vessels to each otherâ€™s waters for a year after the transition period.

â€œWe are looking very closely at those, we regard them as a step forward â€¦ We take a very positive view on reciprocating of those positions,â€ Gove said, adding that final decisions would be made by the secretaries of state for transport and environment.

Commenting on the merit of each contingency proposal, Gove said the U.K. government takes a â€œmore positive and benign viewâ€ on the Commissionâ€™s transport plans, whereas the EUâ€™s approach to fisheries in a no-deal scenario is of â€œgreater contentionâ€ but the U.K. will act in a â€œpragmatic way.â€

He made clear the U.K. is still pushing for annual negotiations on fisheries with the EU, but confirmed there will be a â€œstaged approachâ€ to give the blocâ€™s fishing industry â€œa degree of confidence and certainty over the decreasing level of availability of stocks to them.â€ However, the EUâ€™s request for a 10-year transition for fishing is â€œvery, very difficult,â€ he added.

The deal also covers Britainâ€™s participation in some EU programs for the period 2021-2027, Gove said. He hinted that the U.K. would remain a partner of the research and innovation funding program Horizon Europe from next year, but confirmed news first reported by POLITICO that involvement in the Erasmus+ scheme for studying abroad was not likely. On Monday, Michel Barnier, the EUâ€™s chief Brexit negotiator, told members of the European Parliament that the two sides have not been able to agree continued participation in Erasmus+ by Britain, according to an EU official who took part in the meeting.

â€œNothing is agreed until everything is agreed, and weâ€™re considering which EU programs we should be part of in the future. And again, when weâ€™re looking at both Erasmus and Horizon there are different judgments about their value to the U.K., but we are looking at those in the round,â€ Gove told MPs.

He also surprised MPs by saying that the U.K. might stop being a member of the EUâ€™s Earth observation program Copernicus, which monitors the atmosphere, marine and land environments, climate, emergencies and security. â€œI donâ€™t think we are going to be participating in Copernicus,â€ he told the committee.

Non-participation means U.K.-based businesses, academics and researchers would be unable to bid for future Copernicus contracts tendered through the EU or through any other process using EU procurement rules, in a major blow for the flourishing British space industry.

Asked for confirmation, a spokeswoman for the Department for Environment, Food and Rural Affairs, which is the lead department on Copernicus matters, pointed to the governmentâ€™s Brexit negotiating mandate. The document states that the U.K. â€œwould consider a relationship in line with non-EUÂ member state participationâ€ in Copernicus. The spokeswoman said negotiations are ongoing.

Speaking to the House of Lords later, Gove sought to clarify his earlier comments on participation in EU programs.

â€œI couldnâ€™t guarantee that we would be part of the Copernicus program in the same way that I cannot guarantee that we will be part of Horizon, Erasmus or Euratom. But we are looking at all of these programs in the context of the negotiations,â€ he said. â€œI just wanted to emphasize that it is a necessarily fluid situation and nobody should read in any of my comments earlier a determination at this stage on our part to opt in or opt out of any program definitively.â€