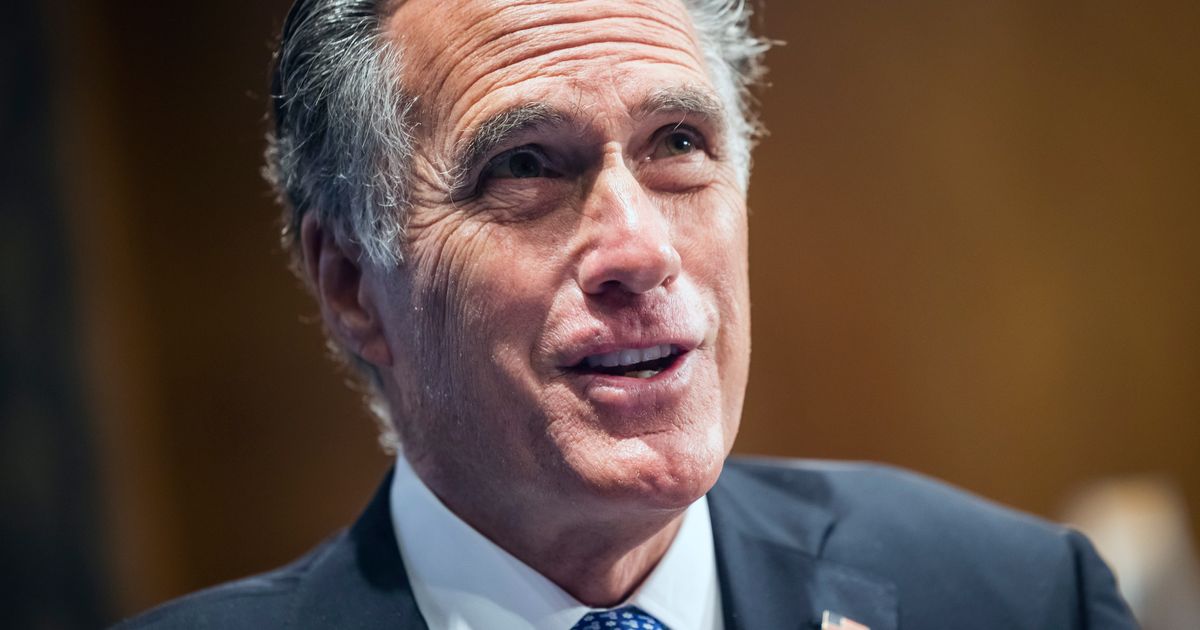 WASHINGTON ― Sen. Mitt Romney (R-Utah) borrowed one of Donald Trump’s favorite nicknames for his critics when asked about the ex-president calling for the “termination” of the U.S. Constitution over the weekend.

“Well, the Republican Party is the Constitution party,” Romney told reporters on Capitol Hill on Monday. “So when he calls to suspend the Constitution, he goes from being MAGA to being RINO.”

Trump often refers to his Republican critics with the monicker “RINO,” which stands for “Republican In Name Only.” Over the years, he’s used it as a put-down against people like Romney, the late Sen. John McCain (R-Ariz.) and others in the GOP who dared to speak out against him.

“A Massive Fraud of this type and magnitude allows for the termination of all rules, regulations, and articles, even those found in the Constitution,” Trump wrote on his social media platform Truth Social.

Trump later tried to argue that he didn’t say what he said and accused the media of spreading lies.

GOP congressional reactions to Trump’s comments ranged from outright condemnation to lukewarm disagreement to obvious attempts to dodge the question. No Republican lawmaker flatly ruled out supporting Trump if he becomes the GOP presidential nominee in 2024, however.

“I don’t know why anybody would say something like that; certainly not an ex-president. I just think it’s irresponsible,” Cornyn added.

“It’s a fantasy,” added Sen. Bill Cassidy (R-La.). “I consider it kind of a Hail Mary to maintain some hope when everybody knows it’s not the case. We’re the party of the Constitution; it’s not going to happen.”

Some of Trump’s biggest allies on Capitol Hill, including those who styled themselves as “constitutional conservatives,” offered little more than a few polite words in disagreement with the idea of torching the nation’s founding documents.

“There are no exceptions to the Constitution,” Sen. Rand Paul (R-Ky.) told HuffPost. Asked if Trump should apologize or clarify his remarks, Paul simply reiterated his statement.

“The Constitution is enduring and it will be for millennia to come,” added Sen. Ted Cruz (R-Texas), another self-described constitutional conservative.

Sen. Roger Marshall (R-Kan.) chided reporters for focusing on Trump’s comments instead of other issues like the economy.

“I’m not going to waste my time trying to dissect when he said this and how he said that. We should be focused on problems that matter to us at home,” Marshall said.

A few GOP senators did offer more fulsome rebukes of Trump’s comments. Sen. Lisa Murkowski (R-Alaska) said that suggesting to terminate the Constitution “is not only a betrayal of our Oath of Office, it’s an affront to our Republic.”

And Sen. Mike Rounds (R-S.D.) said in a statement that “anyone who desires to lead our country must commit to protecting the Constitution.” But when HuffPost asked if Trump’s comments should disqualify him from running for president, Rounds demurred.

“I think what happened on January 6 [2021] is something that he disqualified himself for, but the American voters are going to have to send that message,” he said.