Modern Crocodiles Are Evolving at a Rapid Rate 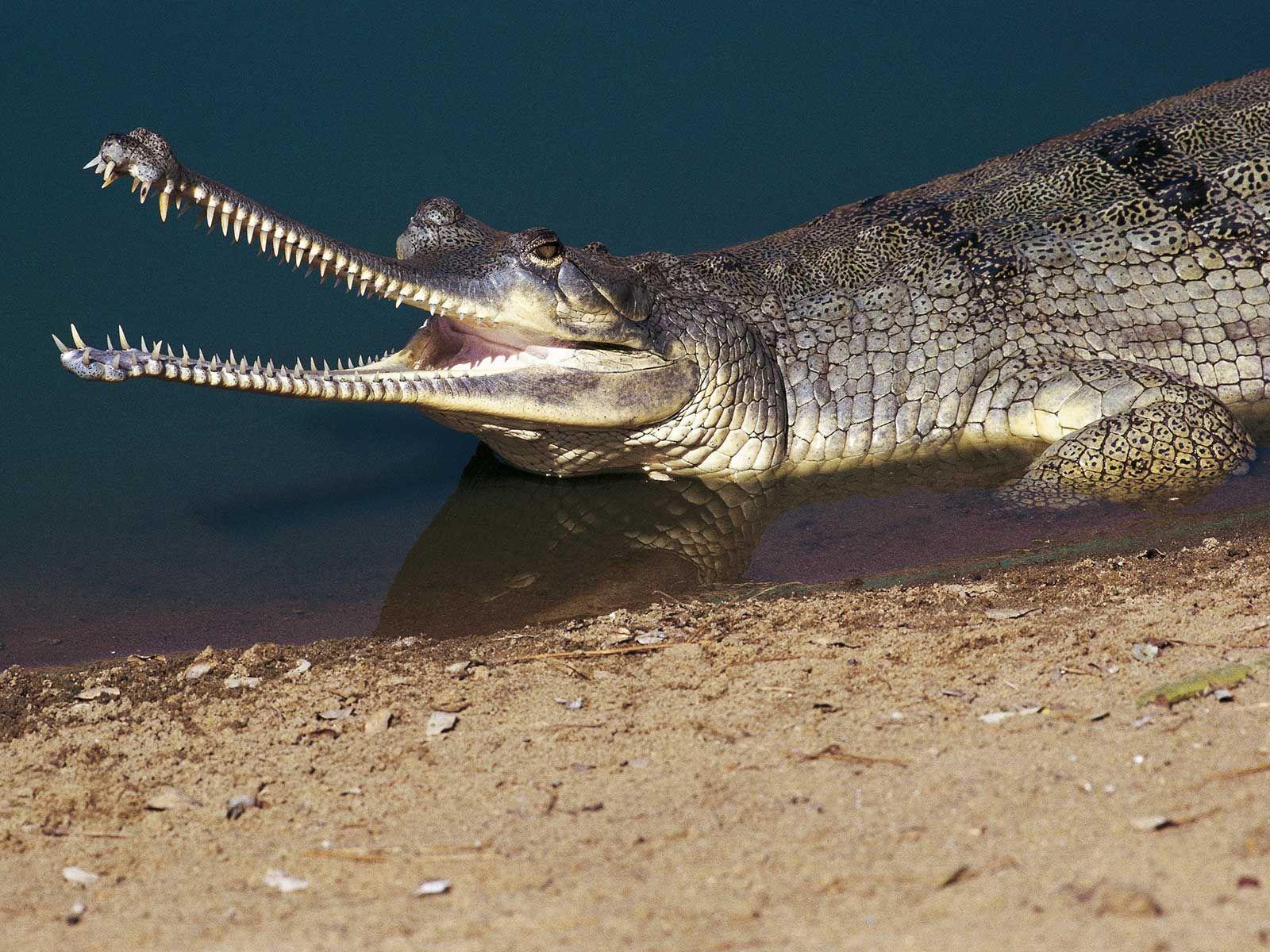 Crocodiles look like they belong to another time, an era when reptiles ruled. But appearances can be deceiving. Todayâ€™s crocodiles are not holdovers that have gone unchanged since the Jurassic, but are one expression of a great, varied family thatâ€™s been around for over 235 million years. More than that, crocodiles are still evolvingâ€”and faster than they have at other times in their familyâ€™s scaly history.

The seemingly contradictory conclusion about crocodylian evolution comes from a recent study published in Proceedings of the Royal Society B by University College London anatomist Ryan Felice and colleagues. By comparing three-dimensional models to track anatomical landmarks on crocodylian skulls over time, the researchers found that modern crocodile species in Australia, southeast Asia and the Indo-Pacific are evolving quickly despite looking like semi-aquatic antiques. Modern croc species look so similar not because of conserving ancient traits, but because crocodiles are evolving the same skull shapes over and over again through time.

â€œCrocodylians just seem ancient and primordial and look a bit like Hollywood dinosaurs,â€ Felice says, not to mention that some species are among the largest reptiles on the planet. American alligators can grow to be 14 feet long, and saltwater crocodiles can get to be over 20 feet in length. On top of that, Felice notes, some fossil crocodiles superficially resemble living species. The spitting reptilian image can create a narrative that crocodiles havenâ€™t changed much at all, content to lurk in the evolutionary backwaters. But thatâ€™s not the real story.

Todayâ€™s alligators, crocodiles and gharialsâ€”grouped together as crocodyliansâ€”shared a common ancestor back in the Cretaceous, around 95 million years ago. But crocodile history goes much deeper. Todayâ€™s alligators and crocodiles are just the remaining members of a broader, older group of reptiles called pseudosuchiansâ€”or crocodiles and their extinct relatives. The first pseudosuchians evolved over 235 million years ago, around the time that the first dinosaurs were making their mark on the Triassic landscape, and have gone through a vast array of changes through time.

Many fossil pseudosuchians were unlike any creatures alive today. Triassic animals called aetosaurs, for example, are sometimes called â€œarmadillodilesâ€ for the way these crocodile relatives resembled large, omnivorous armadillos. Around the same time there lived bipedal crocodile relatives like Poposaurus and Effigia, pseudosuchians that evolved dinosaur-like body plans and habits independently. In fact, during the Triassic there was a greater diversity of pseudosuchian species and body plans than dinosaurs. They, not the â€œterrible lizards,â€ were the dominant reptiles on land. That is, until massive volcanic eruptions triggered a mass extinction about 201 million years ago and many forms of pseudosuchians died out, allowing the dinosaurs to step out of the shadows.

But even in Jurassic and Cretaceous heyday of the dinosaurs, surviving lineages of pseudosuchians thrived. Some crocodile relatives spent their whole lives at sea. Sharp-toothed predators like Dakosaurus and Thalattosuchus hunted the oceans for prey alongside ichthyosaurs and plesiosaurs. Others were terrestrial carnivores that were stiff competition for dinosaurs. In prehistoric Brazil around 90 million years ago, land-dwelling crocodiles like Baurusuchus were among the apex predators of their time and bit into prey with blade-like teeth. And semi-aquatic ambush predators existed, too. Some of them were about the size of their modern counterparts, but a few were giants. Deinosuchus, the â€œterror crocodile,â€ was an alligator that could grow to be almost 40 feet long and lurked in North Americaâ€™s swamps between 82 and 73 million years ago.

Even after the asteroid strike that ended the â€œAge of Dinosaurs,â€ some species of crocodile survived and continued to evolve in new ways. While mammals were going through a major evolutionary flowering, new terrestrial crocodilesâ€”such as the â€œhoofedâ€ crocodile Boverisuchus â€”evolved to chase after them. And even in recent times, until about 4,000 years ago, there lived terrestrial crocodiles in the South Pacific called mekosuchines that had teeth and jaws suited to crunching mollusks and insects. Crocodiles and their relatives havenâ€™t been evolutionary slouches. Instead, these reptiles have rapidly responded to changing times.

To track how crocodile skull shapes changed through the ages, Felice and colleagues used a technique called geometric morphometrics to compare the skulls of 24 living crocodylian species and 19 of their fossil relatives. These three-dimensional models allowed researchers to look at different landmarks on the skullsâ€”such as the placement of the eyes or the length of the snoutâ€” and track how anatomy has shifted over time and through evolutionary relationships.

The analysis did more than track shape. Crocodile snout shapes are heavily-influenced by what those species eat. For example, very long, narrow snouts filled with many small teeth are considered clues to a diet heavy in fish. Living gharials have this shape, but so do some extinct marine crocodiles. Felice and colleagues hypothesize that this fish-eating snout shape has evolved at least three times in the history of crocodiles.

And new studies are beginning to track just how quickly crocodiles are changing, especially modern species. Earlier this year Harvard University paleontologist Stephanie Pierce and colleagues reported that some modern crocodylian lineages are evolving rapidly. The study by Felice and coauthors adds to this picture. Crocodile species living through the landmasses of the southern Pacificâ€”like the famous saltwater crocodileâ€”are showing a high rate of evolutionary change over the past two million years. Over and over again, Felice and colleagues found, modern crocodiles are converging on a small set of skull shapes. Africaâ€™s Nile crocodile and Moreletâ€™s crocodile of Central America are not especially close relatives, for example, but theyâ€™ve evolved remarkably similar skull shapes. Likewise, todayâ€™s broad-snouted caiman of South America has a very similar skull to the extinct crocodile Voay whose remains are found in Madagascar. This is why they seem ancient. Itâ€™s not that theyâ€™ve gone unchanged, but that crocodiles are evolving into a limited number of forms over vast spans of time. Look at a saltwater crocodile and youâ€™re seeing the revival of one of evolutionâ€™s greatest hits.

Recognizing the pattern is just a first step towards answering some deeper evolutionary questions. â€œWith new and more sophisticated analytical techniques,â€ Pierce says, â€œwe can start to better understand how and why they converged on similar morphologies.â€ The new study helps lay the groundwork for experts to investigate how particular diets influence the evolution of distinct skull shapes in both modern and fossil crocs. In addition, Pierce notes, a skull can come together during embryonic development in only so many ways. The number of anatomical forms crocodiles can take are influenced by what internal factors, such as growth, allow as well as outside influences like diet.

Digging in deeper to why crocodiles tend to repeat similar forms over time might help explain why todayâ€™s alligators, crocodiles and gharials seem so similar to each other. They are all semi-aquatic carnivores that hunt by ambush. There are no more terrestrial crocs, seagoing crocs, crocodiles with a varied toolkit of different-shaped teeth, or species like many of those that used to exist. Felice and colleagues estimate that of all the crocodile skull shapes that have existed, todayâ€™s species only represent about a third of that variety. But given the longstanding survival of these reptiles, could crocodiles someday undergo another evolutionary burst and evolve some of these lost forms again?

â€œItâ€™s possible, but highly unlikely,â€ Felice says. There might be some characteristics inherent to modern crocodylians that prevent them from reclaiming some of their familyâ€™s past diversity. Living crocodylians generally have low, squat bodies with limbs that need to hold them up on land as well as push them through water. The need for an amphibious body makes them less efficient on land than mammalian carnivores and not quite as maneuverable as entirely-aquatic hunters, and so competition from other meat-eaters may keep them restricted. The global climate likely has a factor to play, as well. During warmer global climates, Drumheller-Horton says, crocodylian species spread and diversify. â€œBut the crocodylians living today are the survivors of the last cycles of ice ages, so weâ€™re looking at a fairly restricted sampling of the total diversity they once had,â€ she says. On top of that, many modern crocodylian species are facing habitat loss and other extinction threats created by humans. If the armored reptiles are to someday thrive again, theyâ€™ll need a major ecological shakeup to open a path to a new Age of Reptiles.