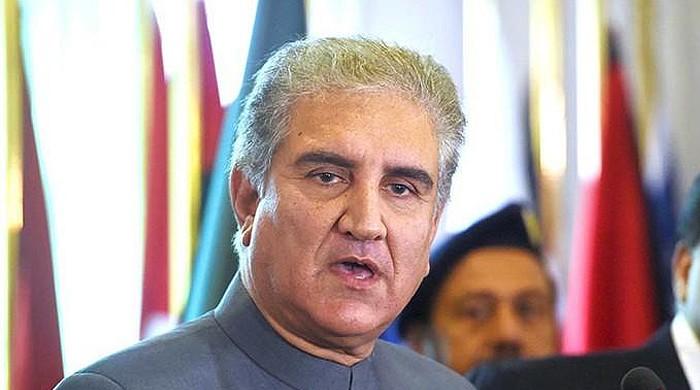 Pakistan, Qureshi added, was “closely monitoring” the deteriorating situation between India and China after 20 of New Delhi’s soldiers were killed in the conflict at the disputed Ladakh region â€” at the Line of Actual Control (LAC) with China.

Speaking on Geo News programme Aaj Shahzeb Khanzada Kay Sath, Qureshi said the responsibility of the escalation lay squarely with India, which “should not have constructed roads” there.

The longstanding conflict between the two neighbouring nations has seen a war in 1962 and while India overstepped again earlier today, “China used existing mechanisms to resolve situation through talks and strategy”.

“India continued on and tried to flex its muscles; it first got a visible beating and now 20 of its troops have been killed,” the foreign minister said. That number, he warned, could rise as well, given the concerning situation.

Terming its behaviour as a hampering of strategic regional ties, he said India was martyring Kashmiris by firing across the Line of Control (LoC), has locked horns with China at the LAC, has started a conflict with Nepal, used the Citizenship (Amendment) Act, 2019 and upset Bangladesh by calling its citizens “termites”, and has issues with Sri Lanka.

People were curious about India’s foreign policy, he added, noting that the country “has become isolated”.

Qureshi said India made the South Asian Association for Regional Cooperation (SAARC) forum dysfunctional and there was no neighbouring country with which it had good relations.

“This is the play of Narendra Modi’s Hindutva regime and it will face a befitting response,” he noted.

In response to a question on whether there was higher or lower risk now of India launching a false-flag operation in a bid to divert attention from Kashmir and its own deteriorating economy, Qureshi said the danger was still there and that Pakistan had information that it plans to use diversionary tactics.

“There’s a reason for it. See, the disorderly and unplanned lockdown it imposed damaged its economy and failed to control the spread of the coronavirus.

“Look at India’s situation on June 1 and as of today; its conditions are worsening fast. They had to lift their lockdown, they face economic loss and couldn’t sustain it, and the infection [of coronavirus] is rising too.

“At the same time, India is using diversionary tactics. The Opposition parties and minorities are both upset and then there’s their treatment of Muslims,” the foreign minister explained.

Qureshi revealed that he would “very soon” call a meeting of the foreign ministers of member states of the Organisation of Islamic Cooperation’s (OIC) Contact Group on Jammu and Kashmir “to talk to them and ask what is going on”.

“I have also written letters to the United Nations Secretary General (UNSG) and the UN Security Council (UNSC) and now, today, international â€” and even Indian â€” media are criticising [the Modi government]”, he said.

Moving towards a conflict ends up destabilising the entire region, the minister underscored, adding that even UNSG Antonio Guterres was appealing for a ceasefire in conflict zones after the coronavirus pandemic took over the world and posed an unprecedented challenge.

“What is Pakistan doing? Peace and reconciliation on the western border with Afghanistan and asking all intra-Afghan factions to initiate a dialogue to move towards peace.

“What is India doing? Despite COVID-19, its aggression and brutality in Kashmir continues, there’s no reduction in the restrictions, and now the China conflict,” Qureshi said.