More than 2,000 protesters arrested during 3 days of violence: Interior Ministry 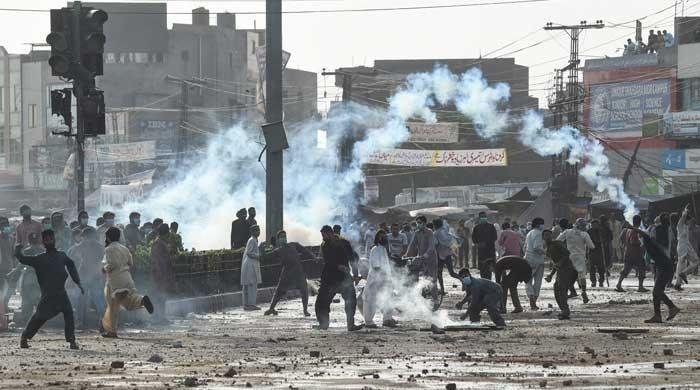 The Ministry of Interior on Wednesday released a detailed report related to the arrests police made from across the country following the three-day protest staged by a religious party.

It should be recalled that the countrywide protests had turned violent, leading to the death of three people, including two police personnel, while more than 100 policemen had been left injured.Â

As per the report, more than 2,135 people have been arrested in connection to the violent protests and cases have been registered under the country’s anti-terrorism laws for creating chaos, clashing with the police, vandalising public and private property, and resorting to violence.Â

According to the report, the majority of the protesters (1,669) were arrested from Punjab, 228, from Sindh, 193 from Khyber Pakhtunkhwa, and 45 from the federal capital of Islamabad.

The protests had lasted three days during which roads were blocked by protesters, leading to massive traffic jams. Many hospitals in Lahore, especially those treating coronavirus patients, had to face troubles due to the shortage of oxygen. Due to blocked roads, oxygen cylinders could not reach the hospitals in a timely fashion, causing a critical situation.

Meanwhile, people in major cities of the country had to remain stranded on the roads due to traffic jams which lasted four to five hours.Â Â

During the protests, a policeman was beaten with sticks to his death, while protesters pelted stones at security personnel, causing serious injuries.

Meanwhile, the government has decided to ban Tehreek-e-Labbaik Pakistan (TLP) under the anti-terrorism law.