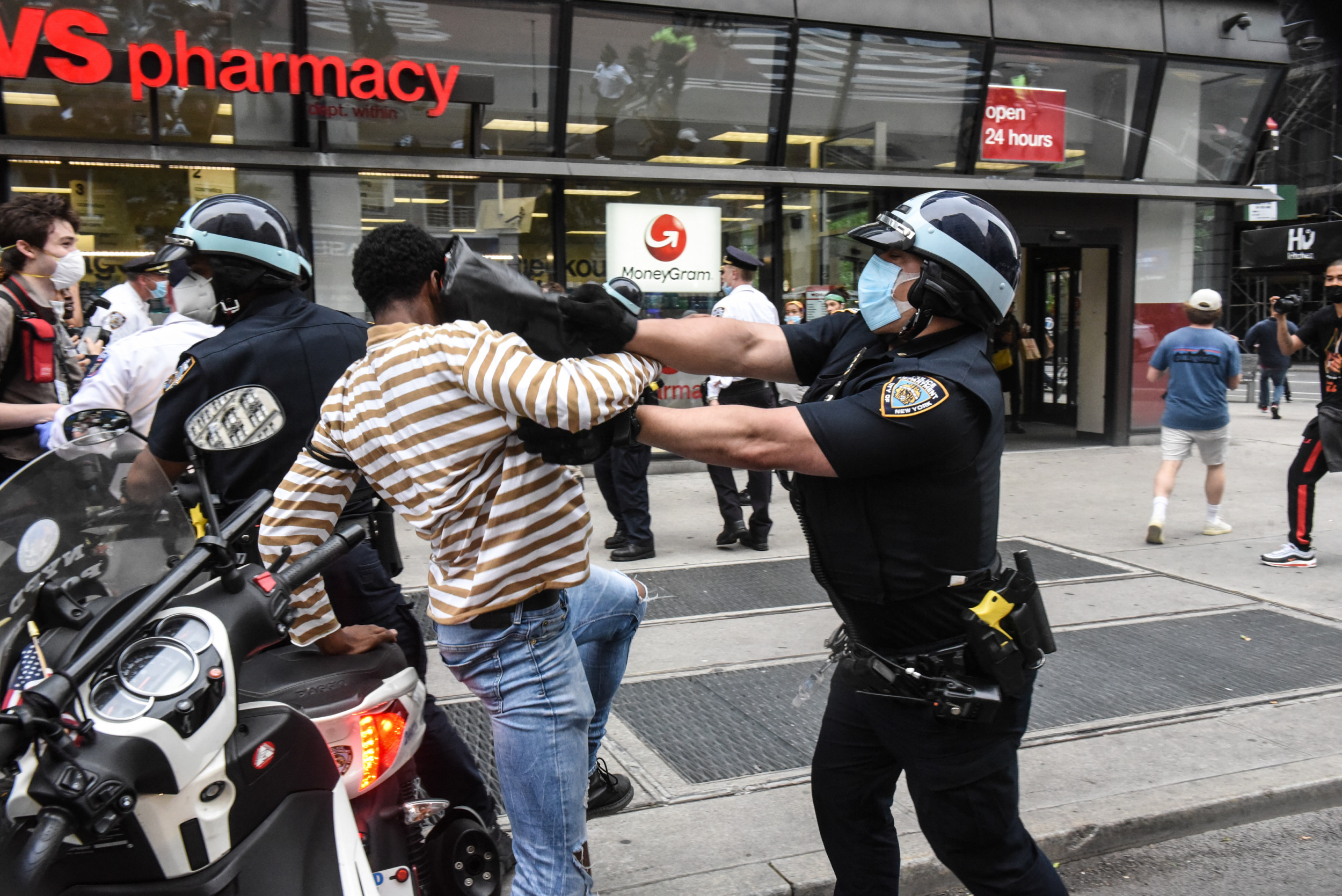 Protests calling for justice in the death of George Floyd sparked clashes between demonstrators and police, leading to multiple arrests in New York City on Friday.

“We have over 40 people that are arrested right now in regards to this ongoing demonstration,” an NYPD spokesperson told Newsweek. “We have multiple officers that have been attacked. We have one officer that was hit with a garbage can and we have another officer who was punched in his face.”

Police said one of the protestors was arrested after unsuccessfully attempting to remove the gun from an officer’s holster. Another demonstrator was reportedly brandishing a knife, while multiple people allegedly spit at police during the protest.

“It keeps flaring up. There’s been about seven or eight arrests,” photographer Dee Delgado, who was at the protest, told Gothamist. “I just witnessed an officer put his knee on somebody’s neck.”

Protests calling for justice for Floyd have spread across the nation this week. Floyd died shortly after being arrested by Minneapolis police on Monday and local protests began the following day. The demonstrations escalated and within days multiple protests had taken place in cities throughout the nation.

Floyd’s death sparked outrage after a video of his arrest went viral earlier in the week. The video shows Floyd, who was black, begging a white police officer to stop kneeling on his neck while complaining that he could not breathe before eventually becoming unconscious and dying.

Riot police in Minneapolis used tear gas on protestors after demonstrations in the city became violent on Wednesday. Several incidents of looting and fires were reported as the protests escalated. At least one person was shot and killed during the rioting.

demonstration in Memphis, Tennessee, on the same night also became heated after a group of counter protestors began arguing with those protesting Floyd’s death. Police arrested at least four people.

Around 1,000 protestors gathered in Los Angeles, California on Thursday, with some blocking traffic on the city’s busy 101 Freeway.

In the Dorchester neighborhood of Boston, Massachusetts, a small group echoed Floyd by chanting “I can’t breathe.”

A local chapter of the NAACP organized another protest that took place in Beaumont, Texas â€” about 80 miles from Floyd’s hometown of Houston.

Similar protests were expected to take place in locations across the country throughout the night, including in Oakland, California and Denver, Colorado.

“I don’t want them to lash out like that, but I can’t stop people right now because they have pain. They have the same pain that I feel,” George Floyd’s brother, Philonise Floyd, told CNN on Thursday. “I want everything to be peaceful, but I can’t make everybody be peaceful. I can’t. It’s hard.”

Benjamin Crump, the attorney representing Floyd’s family, also called for protests to remain peaceful on Thursday, while highlighting the role that the protests could play in achieving justice.

“I spoke with George Floyd’s family this morning and they would like to thank all of the protesters for joining them in standing for JUSTICE. They know we’re all hurting,” Crump said in a statement. “They told me they want peace in Minneapolis, but they know that Black people want peace in their souls and that until we get #JusticeForFloyd there will be no peace.”

“We also cannot sink to the level of our oppressors and we cannot endanger each other as we respond to the necessary urge to raise our voices in unison and in outrage,” he added. “Looting and violence distract from the strength of our collective voice.”

Newsweek reached out to Crump for additional comment but did not receive a response in time for publication.

Protests in Minneapolis and elsewhere are expected to continue over the coming days. Additional planned demonstrations include one set to take place in Houston, Texas on Friday and another in Seattle, Washington on Saturday.

No charges have been filed in Floyd’s death, although the Minneapolis Police Department fired all four officers involved in the incident on Tuesday. A federal investigation was launched Thursday, joining one already being conducted by Minnesota authorities.