Mortar Strikes Kill at Least 20 at Livestock Auction in Afghanistan 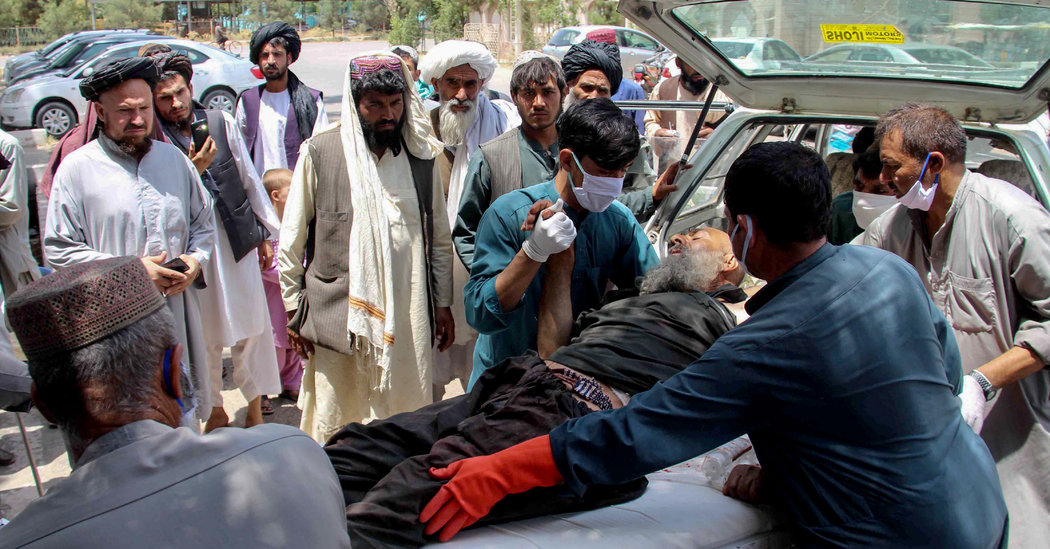 KANDAHAR, Afghanistan â€” At least 20 civilians were killed and dozens of others wounded when mortar rounds struck a crowded livestock market in southern Afghanistan on Monday, with the government and the Taliban pointing blame at each other.

Residents in the district of Sangin, in Helmand Province, where the livestock market is held in a Taliban-controlled area, said that three mortar rounds struck just as the bazaar was buzzing with a crowd of nearly 500 people and hundreds of animals. Several local elders said that the mortars had been fired by the Second Brigade of the Afghan Army, which has a base in the southwest of the district.

â€œHuman and animal flesh was mixed,â€ said Saifullah Khan, who was at the market. â€œTwenty-five people were killed on the spot, 10 others died of their wounds later.â€

Mr. Khan said that although the Taliban had fired rockets at the army base the day before, Monday morning had been quiet and there had been no fighting before the bazaar had started.

Video from the small district clinic showed a large crowd carrying victims, the floors of the compound covered in blood. Children could be heard crying. At the bazaar, bodies of dead animals appeared to be still lying around among hats and shoes.

Emergency, a medical charity that runs a first aid post in Sangin, said part of their facility was also damaged by the mortar shelling, but they continued to treat the wounded.

â€œWe have received thirty patients at our Sangin First Aid Post so far, seven of whom were unfortunately already dead on arrival,â€ said Marco Puntin, a program coordinator for the charity.

The Afghan government denied that its forces were behind the attack. The provincial governorâ€™s office in Helmand, which put the number of dead at 23, said the Taliban had been trying to target military bases with mortars but that the projectiles had landed on civilians.

â€œOur military did not fire any artillery,â€ said Omar Zwak, a spokesman for the governor.

A statement from President Ashraf Ghaniâ€™s office, condemning the strike, called it a â€œterrorist attack.â€ His spokesman, Sediq Sediqqi, said it was the work of the Taliban.

Even as the violence intensifies across Afghanistan, there is often little accountability for the death of civilians. Many attacks are unclaimed, while in other bloody incidents, both sides blame the other and move on to more violence.

Investigations into reports of airstrikes or stray mortars rarely result in public answers. Assassinations and targeted killings have increasingly shrunk the space for activists and human rights workers who try to follow up on cases of civilian harm.

A Taliban spokesman, Zabiullah Mujahid, blamed the Afghan forces for Mondayâ€™s attack and said the Afghan government â€œthrew dust in peopleâ€™s eyesâ€ by describing the mortar-shelling as a car-bomb so they could attribute the violence to the Taliban.

A United States deal with the Taliban in February has started the withdrawal of American troops in Afghanistan. About a third of the 12,000 troops have already departed, but it has done little to abate the bloodshed.

Helmand Province has seen some of the worst fighting of the near two-decade war, with civilians caught between Taliban attacks and clearance operations by Afghan and coalition forces. They have been victims of roadside bombs laid by insurgents and airstrikes carried out by Afghan and American forces. The Taliban control at least five districts in the province, and they contest large stretches in the other eight.

On Sunday, a van carrying civilians was struck by a Taliban roadside bomb in the district of Washir, in Helmand, killing six people including a woman and three children.