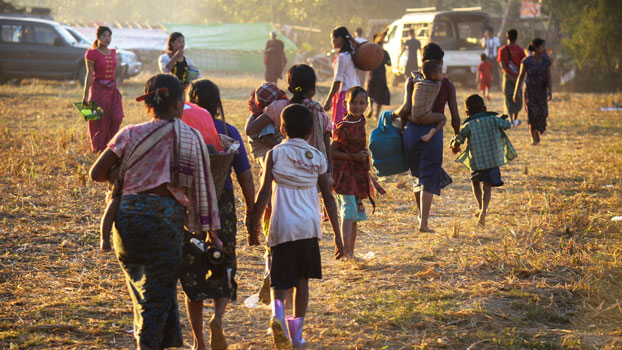 Soldiers have ordered all residents of the 17 communities living in Kyauktan village tract to vacate their homes for â€œclearance operationsâ€ against the Arakan Army (AA) in Rathedaung township, the center of much fighting in the conflict, local officials told RFA.

An extensive military operation in the celebrated landscape of Buddhist architecture in Mrauk-U, the capital of the Arakan kingdom from the 1430s to 1780s, could stoke hostility among the Rakhine people. The AA says it is fighting the central government for more autonomy for the state.

In Rathedaung, township administrator Aung Myint Thein told RFA that Rakhine stateâ€™s border affairs and security minister on Tuesday asked all residents to clear out so Myanmar forces could begin an operation.

â€œThe instructions on the order asked local administrators to inform the people, so thatâ€™s what I did,â€ he said. â€œIt will make the lives of the people safer.â€

The order said that the military received information that AA troops were operating in Kyauktan and nearby areas, he said.

It also warned residents not to host the rebels at their homes and advised them to leave the area to avoid becoming casualties. The order did not say how long the operation would last.

A village administrative official, who did not want to be named out of fear for his safety, estimated that 10,000 mostly ethnic Rakhines lived in the village tract.

It was not immediately clear on Friday how many villagers had left or when the operation would begin.

A Kyauktan resident who declined to provide his name for safety reasons said he feared that he and other villagers would not be able to return to their homes permanently because the military did not include a time period on the order.

â€œI think the military is going to turn our homes into a battlefield,â€ he said. â€œWe donâ€™t know how long their clearance operation will last or how they will conduct this operation. We are also concerned that they will burn the houses.â€

Local villagers said they fear that soldiers will confiscate or destroy the property they had to leave behind, including sacks of rice in storage, farming equipment, and cattle.

Civil society groups have objected to the militaryâ€™s move, saying that it is forcing villagers to flee their homes.

â€œThey have issued an official letter ordering the local people to flee,â€ said Zaw Zaw Tun, secretary of the Rakhine Ethnics Congress (REC). â€œThe letter said â€˜temporarily,â€™ but did not indicate how long that is or who will take responsibility if it goes on for too long. This is very irresponsible.â€

The order makes the current situation even worse for locals who have not been able to plow their fields or hunt because of the fighting between the two forces, which has raged in northern Rakhine since early 2019.

Now, they are being forced to leave their communities amid the annual monsoon season and join the ranks of some other 160,000 displaced civilians living in Buddhist temples and camps in the state.

Khin Saw Wai, a lawmaker from Rathedaung township, said the prior warning from the army can be viewed as a positive development if it minimizes the causalities among villagers in a war in which about 260 civilians already have died â€” many from military shelling of their homes and farms.

â€œThis clearance operation could lead to full-scale battle, so theyâ€™ve asked the local people to evacuate,â€ she told RFA. â€œWe should think positively no matter what. If the fighting occurred all of a sudden, only the local people would get injured.â€

More than 8,000 civilians displaced by the armed conflict took shelter at 25 temporary camps in Rathedaung township as of June 8, according to the REC.

Naing Swe Oo, founder and executive director of the Thayninga Institute for Strategic Studies, a pro-military think tank based in Naypyidaw, said that the government issued similar orders in the past to evacuate local populations ahead of military clearance operations.

â€œWhen civilians are not aware of an upcoming military operation, they can be affected more,â€ he said. â€œThis prior warning can lessen the severity of reports and allegations of civilians being killed by military actions.â€

RFA was unable to reach a military spokesman in Naypyidaw for comment on the operation and its impact on the uprooted villagers.

In Mrauk-U, which is only about 30 miles (50 kilometers) from Rathedaung, residents in three different locations told RFA on Friday that uniformed soldiers camped out atop hills with pagodas could be seen from the Yangon-Sittwe highway.

Mrauk-U has been mooted as a possible UNESCO World Heritage Site because of its array of historic temples and stupas. According to Buddhist tradition, such sites are regarded as places of peace and reflection. Cultural and religious etiquette also demands that visitors to a temple or stupa take off their shoes before entering.

The accounts from villagers squared with videos the AA posted that it said were recorded on June 17 and 20 showing Myanmar soldiers stationed at the Thin Kyit Taung pagoda near Pauktawpyin village in Mrauk-U township and at the Thone Sat Tabone pagoda in nearby Buthidaung township.

Though RFA could not independently confirm the authenticity of the videos, villagers who live near the pagodas said they still can see the troops there.

The villager, who declined to provide his name out of fear for his safety, said the soldiers first engaged in a battle on the mountain a few months ago, then remained there to patrol the area.

Locals said that neither they nor the pagodaâ€™s guardian now visits the site because of the soldiersâ€™ presence.

A Rohingya resident of Buthidaung township said military troops have been stationed in makeshift huts and trenches near the Thone Sat Tabone pagoda on a mountain for more than a year.

â€œThey are in the Thone Sat Tabone, Nwayone Taung, and Htike Htook Pauk mountains,â€ he said. â€œWe can see them from a distance.â€

Buthidaung township’s Buddhist Monk Council appealed to the Rakhine state government in October 2019 to stop the military from stationing soldiers at Thone Sat Tabone pagoda and from firing guns there.

Locals said there was a similar case in adjacent Kyauktaw township in March 2019, when military troops withdrew from the area near the ancient Kyauktaw Taung pagoda after the townshipâ€™s monk council appealed to state officials.

Colonel Win Zaw Oo, commander of the militaryâ€™s Western Command responsible for Rakhine state, told RFA in September 2019 that the army had stationed troops on pagoda hills to support its ground troops by aiming weapons at advancing AA soldiers.

â€œPan Myaung village is bread basket for AA troops,â€ he said. â€œWe stationed our troops on the hill to control the strategic advantage against AA troops.â€

RFA could not reach military spokesmen on Friday for an update on the situation and to address the contradictory reports.