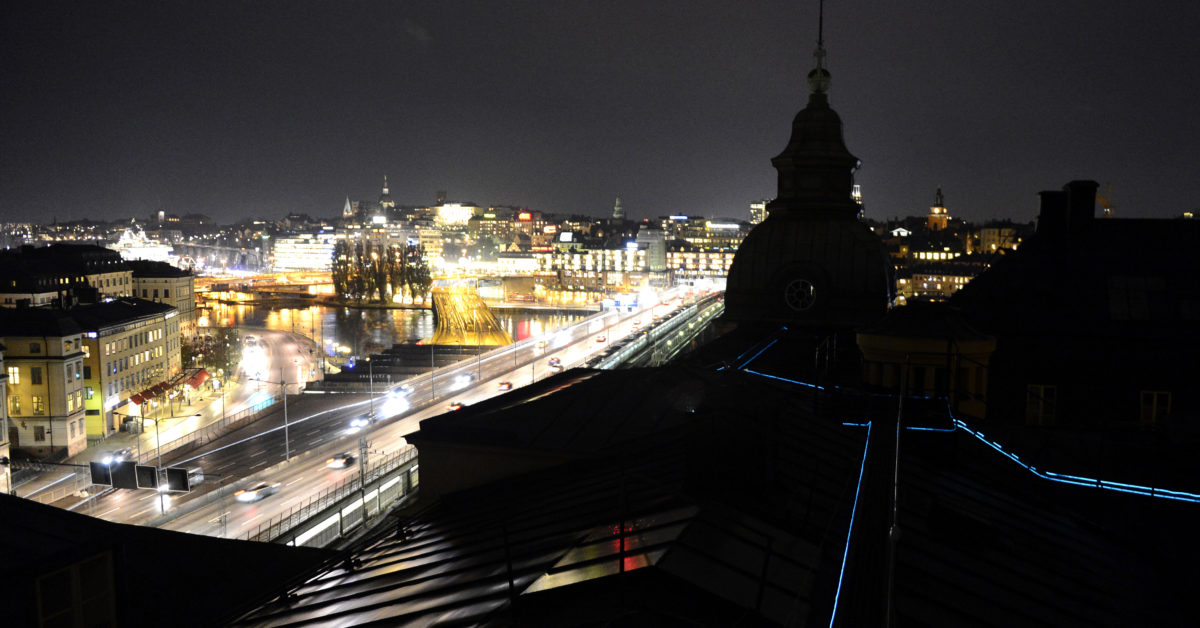 STOCKHOLM â€” As darkness fell Tuesday night, Stockholmers looked to the skies and wondered whether the drones were coming back.

Over recent days, reports have multiplied of black-winged machines flying at night over a range of sensitive sites, including three nuclear power stations, a large water treatment plant and a royal palace.Â

A photoÂ publishedÂ by the Swedish daily Expressen on Tuesday â€” shot by a passerby, Mathias Ã˜gendalÂ â€” showed what appeared to be a drone flying over the central Stockholm amusement park GrÃ¶na Lund.Â

â€œI saw it through the front windscreen of my car, flying high over the city,â€ Ã˜gendal told the paper. â€œI thought it was strange that it was flying around there.â€

In a sign that the reports are being taken seriously by the authorities, the Swedish Security Service (known as SÃ¤po), said it has taken over the investigation into the flights over the nuclear power stations.

Per EngstrÃ¶m, a police chief in Stockholm, told Swedish broadcaster SVT on Wednesday morning that no suspects had been identified so far, but that investigations continued and the police remained open-minded about eventual motives behind the drone activity.Â

â€œThere is plenty of speculation about motives â€” that it could, for example, be an attempt at mapping out sites,â€ he said.Â â€œIt could also be people who have flown their drones into these places by mistake.â€Â

But as the number of reports of drones has increased, and as eyewitness descriptions haveÂ suggestedÂ the machines were of a winged type favored by the military, speculation has grown that a hostile state could be responsible.Â

With relations between Russia and Western nations â€” including Sweden â€” as tense as they have been in decades, that speculation has centered on Moscow and whether the drone flights could be connected in some way to the worsening regional security picture.

â€œIt is an obvious thought that occurs, but it is impossible to judge, you can only speculate about that, and people do,â€Â saidÂ Martin HagstrÃ¶m, a research director at the Swedish Defense Research Agency. â€œThat is one reason why it is important to investigate this.â€

The Russian embassy in Stockholm did not respond to an email requesting comment on the speculation that there could be a link between Russia and the drone sightings.Â

The first drone sightings were reported on Friday evening over the nuclear power stations Forsmark â€” just north of Stockholm â€” and Ringhals and Oskarshamn in the south of Sweden. Over the days since, similar observations have been made over the royal palace at Drottningholm and a large water treatment works at Norsborg â€” both on the edge of Stockholm â€” and government offices in the city center.

While the dronesâ€™ origin remains a mystery, what is clear is that the aircraft arrived at an unusually tense time for Sweden.Â

Last week, the country increased its military presence on its strategically important Baltic Sea island of Gotland amid reports of unusual naval activity by Russia in nearby waters.Â

An era of heightened Swedish suspicions about Russian military and intelligence activities arguably began in 2013, when a group of military planesÂ flewÂ close to the Swedish coast in what was later assessed to be a simulated attack on Stockholm.Â

In 2014, a submarine was assessed to have entered waters near Stockholm sparking a massive naval hunting operation. Russia denied involvement, but senior Swedish lawmakers pointed the finger at Moscow.Â

Sweden has had problems with mystery drones before. In 2016, a military training exercise was halted when mystery unmanned aircraft wereÂ spottedÂ overhead.Â

Swedish authorities said that the investigation into these latest drone flights is ongoing and comments from police chief EngstrÃ¶m suggested some progress was being made.Â

â€œWe have begun to see certain patterns in how they behave around certain facilities so we hope to get closer to the truth in various ways,â€ he said.