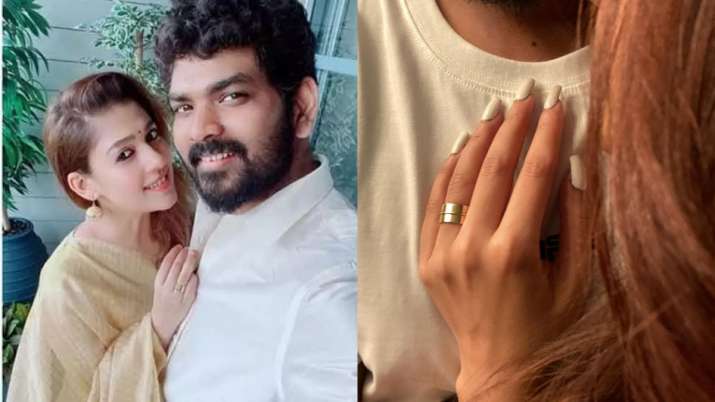 South actress Nayanthara is gearing up for the release of her upcoming film Netrikann. The actress appeared on a chat show recently for the promotions of her film and confirmed that she is engaged to her boyfriend Vignesh Shivan. Earlier, pictures of her engagement ring had gone viral while the actress had stayed tight-lipped. now, she has finally confirmed it.

The channel has shared a promo video in which the host Dhivyadharshi asked Nayanthara about her ring and the actress confirmed her engagement. The actress told the host, “This is an engagement ring,” while flaunting aÂ vibrant smile. The host also asked what she likes about beau Vignesh. To this, the actress replied, “Everything.”

Earlier in March, Vignesh had shared a picture on Instagram which had sparked their engagement rumours. In the post, the acterss’ hand was seen resting on Shivan’s chest. She was wearing a gold band in her engagement finger and also the caption that read, “Viralodu uyir kooda korthu….(sic)” with a bundle of hearts. The term roughly translates in English to– “Tied my lifeline to my fingers.”

Nayanthara and Vignesh have been together since 2015 and their social media is loaded with cute pictures of them together. They met on the sets of ‘Naanum Rowdydhaan’ and cupid struck them. Rumours of their wedding spread every now and then but neither of the two has ever opened up about their plans.Â

On the work front, Nayanthara will next be seen in “Netrikann”, “Mookuthi Amman”, “Annaatthe” and “Kaathuvaakula Rendu Kaadhal”.