National Command and Operations Centre (NCOC) chief Asad Umar on Monday said the new Covid variant, Omicron, wreaking havoc across the world will also eventually affect Pakistan as well, but the country has a few weeks to counter the threat.

In a press conference, the NCOC head, flanked by Prime Minister’s Health Adviser Dr Faisal Sultan, said the logical solution to thwart the new variant was full vaccination. He urged the citizens to complete their doses in the wake of the “very dangerous” variant.

According to Umar, the variant has spread across the world and it would be impossible to stop it from entering Pakistan because the world was so inter-connected.

During the press conference, Umar said the government will ramp up testing in high-risk areas and added that the contact tracing system will be reinitiated. He further said Pakistan had also banned flights from countries that were under the Omicron onslaught.

The NCOC chief said all such steps can delay the arrival of the new variant in the country, but it was impossible to stop the new variant from entering Pakistan because the world was so inter-connected.

This is a very dangerous variant, but vaccination will still be effective against it, he said citing the initial report regarding the new variant.

Umar said vaccinated individuals will be able to mitigate the effect of the virus, adding that provinces have been urged to step up the inoculation rate.

He further stated that Pakistan has two to three weeks to vaccinate its population so that that threat of Omicron could be reduced to the minimum level possible, adding that an announcement regarding booster shots will be made on November 30.

During the press conference, PM’s health aide Dr Sultan said the majority of people hospitalised or killed in European countries due to the virus had not been fully vaccinated or had delayed their doses.

He said the Omicron variant was a cause of concern because it was spreading at a rapid pace. “This would strain the healthcare system, resulting in a shortage of beds and oxygen,” he added.

Sultan maintained that as per initial scientific reports, the genetic makeup of the variant was mutated to possibly make the virus deadlier. As it’s impossible to stop the virus from entering Pakistan, it was imperative to get fully vaccinated at the earliest, he said, adding an increase in the vaccination rate would mitigate the effects of the Omicron variant.

The premier’s aide further urged the people to practice social distancing among other anti-Covid measures.

At the end of the presser, the NCOC head again urged for children aged 12 to get vaccinated as after the emergence of Omicron in Pakistan, there won’t be much time to tackle the problem.

He gave an example of South Africa, saying in mere 12 days, the positivity rate in the African state rose from 0.9 per cent to 9.77pc. 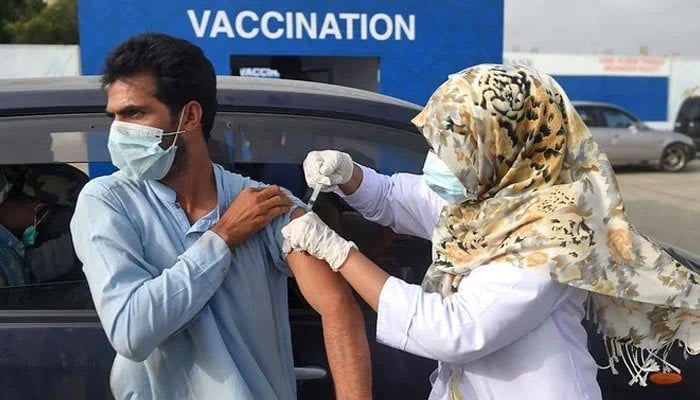 Coronavirus in Pakistan: Active cases cross 100,000 for the first time since July 2020