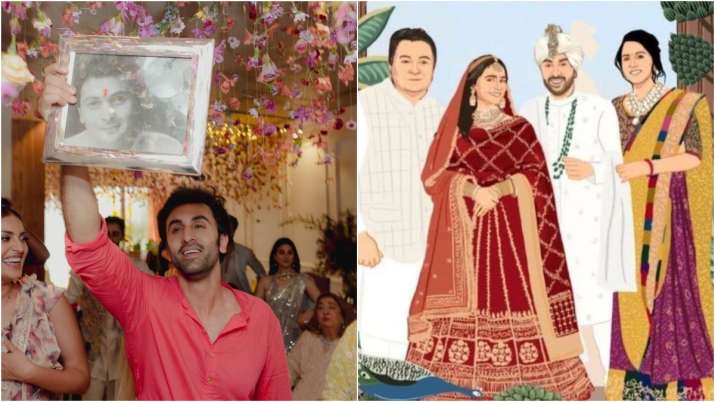 Ranbir Kapoor and Alia Bhatt mesmerised one and all with their intimate wedding. Without much fanfare, the couple said their vows at their homes in the vicinity of their family and a few selected friends. Ranbir also made sure that his late father Rishi Kapoor was a part of the festivities; a pic of the groom holding the veteran actor’s photo during one of the ceremonies is proof of the same. Days after Ranbir-Alia’s wedding, their fans have been sharing edited graphics imagining Rishi Kapoor at the festivities. Rishi passed away on 30 April 2020 after a long battle with cancer.

Ranbir’s mother and veteran actress Neetu Kapoor recently reacted to one such pic. She shared such a graphic on her Instagram Stories and posted heart emojis. In the post, the user has imagined the late actor standing beside the newlywed couple. Take a look:

This is not the first time that Neetu took notice of the post. Earlier, she had a similar fan’s artwork featuring late veteran actor Rishi Kapoor in the wedding picture of their son, Ranbir Kapoor with Alia Bhatt.

Neetu had shared a video clip on her Instagram story, which features Mahesh Bhatt, Soni Razdan, Riddhima Sahani Kapoor, Shaheen Bhatt, Neetu Kapoor posing with the newly-wed couple. Soon, a picture of Rishi Kapoor dressed in an ivory Kurta pajama is photoshopped into the image.

Neetu’s daughter Riddhima too shared the video on her Instagram story and thanked the fan for the edited version of the image. She wrote: “Love this edit. Thank you for sharing,” she wrote.

Ranbir and Alia got married in an intimate wedding on April 14.