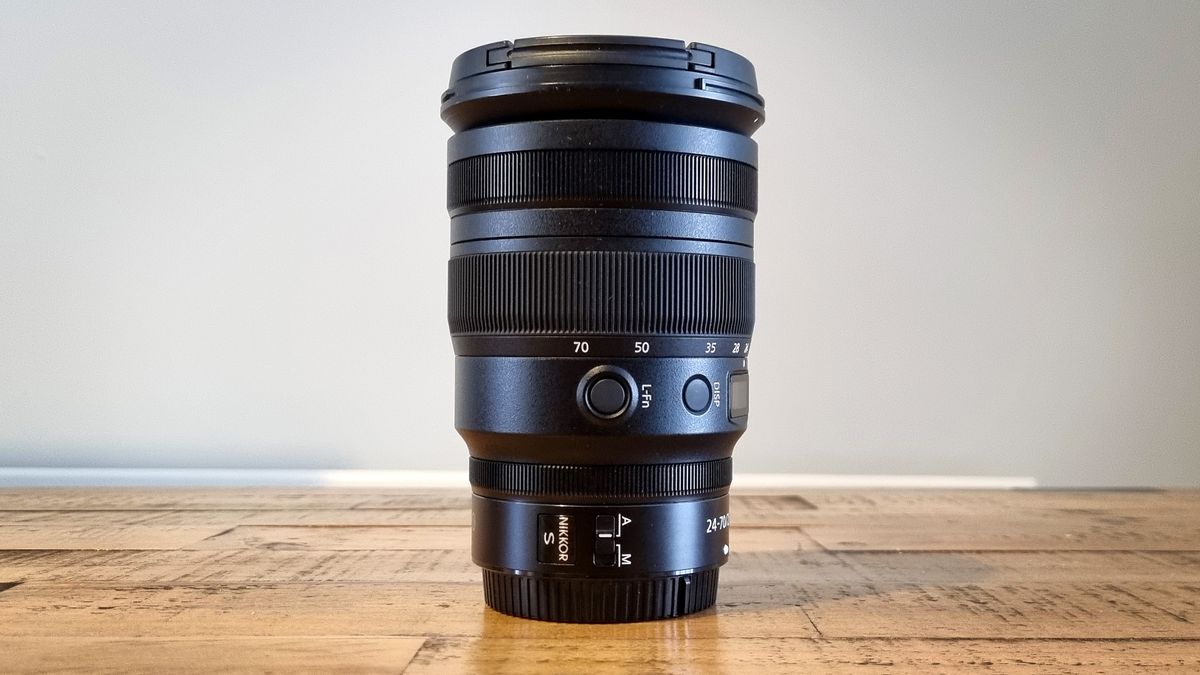 The Nikon Nikkor Z 24-70mm f/2.8 lens is probably one of the best lenses you could have in your camera bag. To call it a kit lens is to do it a disservice, even if it has all the versatility of a classic short-range zoom.

If you wanted to be ready for almost any astro scenario (arguably, the 200mm isn’t quite enough for detailed moon images), we’d absolutely recommend all three lenses. If you’re a photographer who likes to take a wide variety of shots, we’d 100% start with this, the 24-70mm. And we’d make sure you don’t confuse it with the excellent value, but not perfect for night sky shots, f/4 version. All clear? No? Excellent, let’s move on.

The Nikon Nikkor Z 24-70mm f/2.8 S is a well-designed lens, with the absolute minimum of fuss applied to it. Unlike its cheaper f/4 counterpart, there’s no extension of the lens when you zoom it from nearer to further focal lengths, so while it’s a decent 5-inches to begin with, that’s as long as this lens gets. This makes it better in extreme weather if less compact for travel. Crucially, though it means you get a digital display on the top that can be configured to display a variety of settings (focal length, aperture etc), which makes it handy for astro shoots as you can double-check your settings while it’s secured on the tripod.

You’ve got an additional function button, that can be customized as needed (with any of 21 commands), and the standard layout with the furthest ring used for focusing, and the inner ring used for focal length. There’s a subtle near-camera ring too, that controls the aperture. As with most Nikon lenses, there’s a switch that lets you quickly toggle between AF and MF – again, handy for tripod shooters who’d rather not stare at a bright screen to make quick adjustments.

The lens is fully weather sealed, as you’d expect from the S-Line series, and it feels tough despite being relatively light. There’s an 82mm thread for fitting filters and attachments, which although on the wide side, means you shouldn’t have issues finding suitable accessories.

What we love about this lens is that it offers you choice in almost every shooting situation. It’s wide enough for grand landscapes, has enough zoom for basic wildlife shots, and hits the sweet spot for portraiture. Loads of lenses do that, sure, but it’s the wider aperture (up to f/2.8) that makes it truly versatile. This means depth and bokeh when shooting animals, detail when shooting the Milky Way and, with the narrowest aperture of f/22, you can even experiment with close-up and longer exposures during the day.

However, if you’re attempting to recreate the detail you see in macro images, you’ll be disappointed. There’s a minimum focusing distance of almost 40cm / 1.3ft here, and even in our well-lit tests, we struggled to get the lens to focus around this distance. That’s not a real concern, as this isn’t meant to be a macro, but keep it in mind if you’re taking astro shots with a foreground element and focus stack where appropriate.

That wider aperture comes into its own at night, allowing you to capture star details with a short enough shutter speed to avoid trailing. We think it’s the realistic minimum for photographing stars and that’s one potential drawback of the 24-70mm. While it’s a great lens to have in your bag, it isn’t a specialist, so those looking to really up their astro game should be looking at something like the Nikon Nikkor 20mm f/1.8 S lens which has that extra width and lower f-number. When we were out shooting astro with this lens we took the same shot with the 24-70mm as with our trusty 20mm f/1.8 and did see noticeable differences in the same scene. The wider lens gave us more detail while keeping the stars slightly sharper, and it gave us a far ‘bigger’ sky.

We found this lens perfect for light trails. It gives you the flexibility to adjust your shot to vary the size of your trails, and it has the aperture range to give you the ability to either focus on the trails themselves (or an object) or flatten the photo out completely. If you do want to shoot motion and handheld trails, it’s a handy lens to have too, as it isn’t excessively heavy.

Elsewhere, though, the 24-70mm delivered great results. We never wanted for more width in general landscape shots, and while the 70mm maximum length can be frustrating for snapping the moon, and more timid animals, it’s great for pets and willing humans. While the lens isn’t subtle enough to be a good street photography option, it’ll still perform with portraits all the same.

As you’d expect from a lens of this quality, the image is pleasingly sharp right to the edge, at all focal lengths. There’s no perceptible distortion of the image, nor any light bleeding around the edge or vignetting (unless you’re using the hood it’s supplied with).

There’s little more to say about the functions of the lens itself, although the feel and practicalities of its features are well worth mentioning. We’ve found similar things with the other premium Z lenses in that the control rings on the barrel are near-perfectly balanced in terms of torque. There’s a subtle looseness to the focusing ring, a tighter feel for the focal length, and a definite graded feel to the smaller control ring. Our only complaint is that the aperture ring sits a little too close to the camera, so takes a little getting used to, and we sometimes found it trickier to access when looking through the viewfinder and not at the camera itself.

At 5-inches and 1.7 lbs, you can happily fit the 24-70mm to most tripods (via the camera’s tripod connection) and get very little movement or settling, unless you’re combining it with a heavy camera body like the Z9. There’s no need for a separate tripod collar/foot with this lens, although you may find it challenges some ball-heads if you’re using a glass filter too.

As with all Z lenses, it’s so simple to mount onto the camera body, and it feels very secure once it’s there. As we mentioned earlier, though, we rarely found the need to change it during regular photo sessions as it covers multiple photographic disciplines easily.

This lens aced most of our tests. However, unless you’re comparing it to another 24-70mm lens, we wouldn’t say it’s the absolute best at anything. We prefer a wider, faster lens for astro, a longer zoom for moon images, and the far cheaper f/4 version of the 24-70mm is just as competent for daytime landscapes.

At $2000+ it’s not cheap, either, and will likely suit those who shoot professionally more than the hobbyists. It’s weird to throw so much shade at what is, essentially, one of the best Nikon lenses we’ve handled. We essentially love this lens for a wide variety of photos, but it isn’t what we’d reach for if we wanted to get specialized.

So, if you have the money and you’re looking for a reliable zoom to sit on your camera and snap all kinds of shots, this is the lens for you. If you’re determined to get the edge in a more specific type of shot, this isn’t likely to be the one.

Clocking in around 60% cheaper, the Nikon Nikkor Z 24-70mm f/4 S (opens in new tab) version of this lens is still a delightful piece of glass. While you’ll struggle to do astro with it, this lens will handle most daytime shots (and long exposures) with ease. It’s lighter too, and more compact, although it does extend lengthwise when zooming.

At about half the price you can go for the Nikon Nikkor Z 20mm f/1.8 S prime (or the 24mm prime, although it isn’t quite as good), which is more of an astro tool. While you lose the ability to zoom, you do get a very wide angle and a delicious maximum aperture of f/1.8, which is ideal for star shots.

Then there’s the latest Nikon lens, the Nikon Nikkor Z 28-75mm f/2.8 (opens in new tab). It’s a strange one, this. We haven’t tested this more affordable zoom for Nikon’s mirrorless system, but it offers very similar stats for almost half the price. You don’t get as wide a shot, but you get a slightly longer zoom and while it isn’t quite as high quality as the 24-70mm we’ve reviewed here it’s a damn good lens all the same.