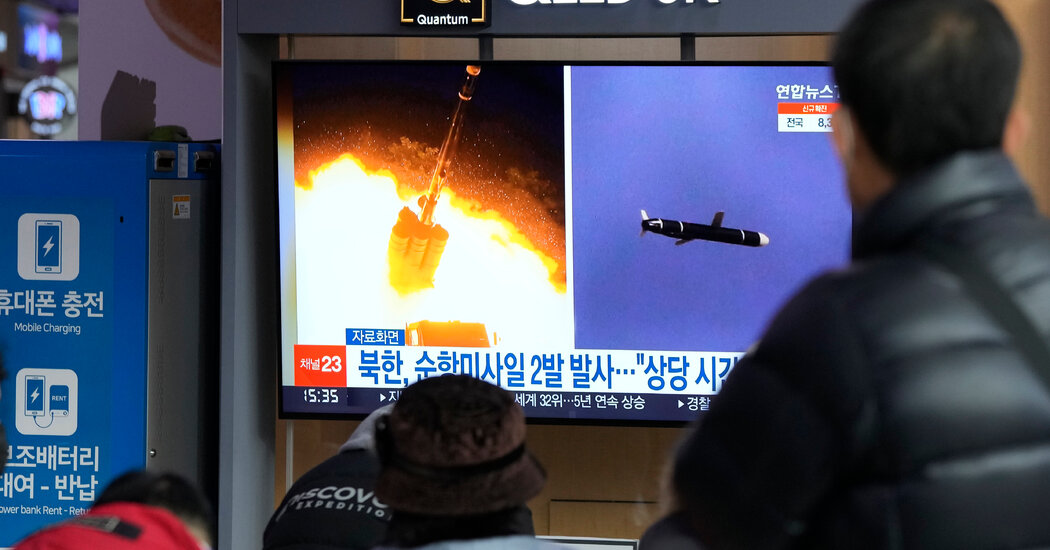 North Korea began the year with a spate of missile tests, raising tensions at a sensitive time: China is gearing up to host the Winter Olympics in Beijing next month, and South Korea is preparing for its presidential election on March 9.

The South Korean military said its analysts were studying the trajectory of the latest launch and other flight data to help determine the types of missiles launched.

The latest flurry of missile tests suggests that â€‹North Koreaâ€™s leader, Kim Jong-un, is both pushing ahead with his program of modernizing his countryâ€™s missile forces and trying to jolt the Biden administration out of its diplomatic slumberâ€‹ and force Washington to engage with North Korea on Mr. Kimâ€™s terms.

In â€‹the first two weapons tests this month, conducted on Jan. 5 and Jan. 11, â€‹North Korea launched what it called hypersonic ballistic missiles with detachable gliding warheads, which made them harder to intercept because they â€‹were designed not only to fly extremely fast but also to change course during flight.

Repeated U.N. Security Council resolutions ban North Korea from developing or testing ballistic missile technologies or technologies used to make and deliver nuclear weapons. The North insists that it is exercising â€œits right to self-defenseâ€ and that the missile tests are â€œpart of its efforts for modernizing its national defense capability.â€

After their three meetings ended without agreement in 2019 on how to roll back the nuclear weapons program or when the United States would lift sanctions against the country, the North resumed testing mostly short-range ballistic missilesâ€‹. â€‹

In late 2019, Mr. Kim warned that he no longer felt bound by his self-imposed moratorium on nuclear and long-range missile tests. â€‹ During a Politburo meeting last â€‹week, he â€‹again â€‹suggested that his government might restart its testing of long-range missiles and nuclear devicesâ€‹.

An escalation. North Korea started a new round of testingÂ in Septemberâ€‹ after a six-month hiatus. It has since completed several missile tests, including the firing of two ballistic missiles on Jan. 14, thatÂ violated the 2017 U.N. resolutions.

The Biden administration has so far taken no real steps to entice Mr. Kim, other than proposing talks â€œwithout preconditions,â€ a lukewarm entreaty that North Korea has rebuffed.

Amid the latest series of missile tests, Washington has again urged North Korea for talks.

â€œWe have made it very clear to Pyongyang,â€ Mark Lambert, the United Statesâ€™ deputy assistant secretary of state for Japan and Korea, said on Wednesday. â€œWe will go anywhere. We will talk about anything. There are no reservations we have.â€

â€œWe have to have a serious discussion about the denuclearization of North Korea, and if North Korea is willing to do that, all sorts of promising things can happen,â€ he said.

North Koreaâ€™s latest launch came amid reports that its internet service appeared to have been hit by a second wave of outages in as many weeks, possibly caused by a so-called distributed denial-of-service cyberattack.

In North Korea, only a small group of elites are allowed access to the global internet. Its websites, all state-controlled, carry propaganda for Mr. Kimâ€™s government and report developments, such as its weapons tests, that it wants the world and the North Korean people to be aware of.