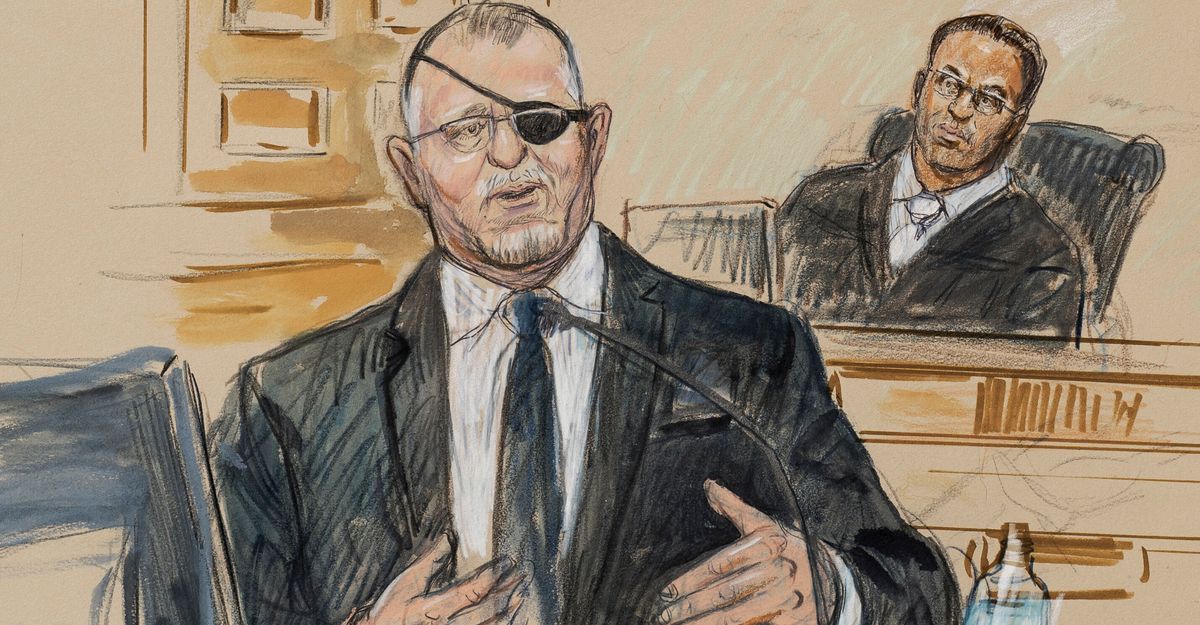 Jurors have reached a verdict on the fate of five defendants linked to the far-right Oath Keepers charged with seditious conspiracy in what was the government’s highest-stakes Capitol riot trial held so far.

The verdict, which came after three days of deliberations, is expected to be read Tuesday afternoon.

The proceedings stretched on for nearly two months; the process of selecting a panel of 12 jurors and a handful of alternates began the last week of September.

Prosecutors stood to prove that the deadly mob that stormed the seat of U.S. legislative power posed a real threat to American democracy. A guilty verdict would underline the importance of efforts to hold participants accountable ― efforts including those of the House Jan. 6 select committee, which is currently preparing to release a hotly anticipated report of its findings.

Defendants Elmer Stewart Rhodes, Thomas Caldwell, Jessica Watkins, Kelly Meggs and Kenneth Harrelson were each accused of scheming to disrupt the transfer of presidential power by force on Jan. 6, 2021.

The rarely used charge of seditious conspiracy carries a maximum prison sentence of 20 years. To date, the longest sentence anyone has gotten for participating in the attack on the Capitol was 10 years behind bars, doled out to a former New York City police officer who attacked Washington law enforcement.

Three of the defendants took the stand: Rhodes, who founded the Oath Keepers as an anti-government militia after the election of former President Barack Obama; Caldwell, whose lawyers suggested his poor health prevented him from seriously acting on any threats he made to overthrow the government; and Watkins, who angrily voiced her support for election fraud theories in court.

All three struggled to varying degrees when confronted with evidence of their own past statements during cross-examination.

For more than a decade, the Oath Keepers have recruited active and former law enforcement and military servicemembers who pledge to oppose any “orders” they consider unconstitutional.

Written messages, including Signal messages and blog posts, displayed in the courtroom revealed how Rhodes often used grandiose language to suggest the group’s mission had an almost biblical purpose. In one open letter to then-President Donald Trump, which was posted on the Oath Keepers website in late December, Rhodes outlined what was at stake if Trump failed to block Joe Biden’s electoral victory.

“If you fail to do your duty,” he told Trump, “you will leave We the People no choice but to walk in the Founders footsteps, by declaring the regime illegitimate, incapable of representing us, destructive of the just ends of government ― to secure our liberty ― and to be a mere puppet of a deadly foreign enemy.”

At trial, evidence showed how members of the group stashed a large quantity of powerful rifles and ammunition, along with other survival gear, just outside the Washington, D.C., border at a hotel where they were staying. While Washington has strict gun control regulations, Virginia’s laws are laxer.

Prosecutors showed stills from security cameras in which defendants could be seen wheeling in large cases of the supplies, which a “QRF,” or quick reaction force, could transport to the Capitol if needed. Text messages showed Caldwell debating whether he should have a boat on hand to ferry the weapons across the Potomac River, although Caldwell denied that was ever his plan. (In one of the trial’s more absurd moments, Caldwell testified that a text-message reference to moving “heavy weapons” was just something out of a screenplay he was writing.)

Rhodes also denied that the weapons were part of a QRF, telling the court that Oath Keepers were simply accustomed to traveling heavily armed but wanted to respect D.C.’s gun laws ― which he termed “bullshit” in one audio recording of an Oath Keepers leadership phone call.

Rhodes testified that he believed Trump had the legal ability to invoke the 200-year-old Insurrection Act on Jan. 6, 2021. If Trump did so, the Oath Keepers and other militia groups would supposedly have the “legal cover” to grab their guns and use them to keep Trump in power by force, buying time to hold a new election, as Rhodes said he personally believed no one had won the 2020 election due to fraud.

As a testament to the sheer volume of firepower the Oath Keepers brought with them to the Virginia hotel, former Oath Keeper Terry Cummings said at trial, “I had not seen that many weapons in one location since I was in the military.”

The defense strategy was far from cohesive. But attorneys for the group largely portrayed their clients as well-intentioned and patriotic. They stressed how their clients’ political allegiance ― their support for Trump ― was not on trial, nor were they charged with actually misusing their weapons. Jurors were instructed to keep in mind the Constitution’s free speech protections, which include speech that they may personally find offensive, but they were reminded that they could weigh any statements made by defendants as evidence that they may have entered into a conspiracy.

Not all of the defendants entered the Capitol. Rhodes stood outside the building and watched while sending out text messages. Caldwell made it as far as the entrance to a tunnel on one side of the building where some of the worst violence took place, although he claimed not to have seen that kind of behavior.

In a text message he sent to a friend the evening of the attack, Caldwell recounted the scene at the Capitol: “[T]he lying media said Trump supporters were breaking through the barricades so i said if we’re going to get blamed, might as well do it so I grabbed up my American flag and said let’s take the damn capitol so people started surging forward and climbing the scaffolding outside so I said lets storm the place and hang the traitors.”

Three defendants ― Meggs, Harrelson and Watkins ― were part of a group of Oath Keepers who prosecutors say positioned themselves in a military-style “stack” formation to enter the Capitol. Photos showed the group marching in a column with one hand on one another’s shoulders as they moved up the Capitol steps. Meggs and Harrelson, prosecutors said, were there in search of House Speaker Nancy Pelosi (D-Calif.).

Watkins used part of her time on the stand to express remorse for her actions, apologizing specifically to a Metropolitan Police officer who was positioned opposite her, “protecting other officers from my dumb ass, basically,” she said, according to Mother Jones. The officer, Christopher Owens, had testified earlier in the trial.

Although prosecutors had a number of written messages and some audio recordings to bolster their case, some messages the defendants sent had allegedly been deleted. Instead, former Oath Keepers provided insight into the group’s mentality. One, Graydon Young, testified that while there was no particular plan to enter the Capitol that day, those who did saw themselves as participants in “a Bastille-type moment.” Another, Jason Dolan, explained to the jury how he was preparing to say goodbye to his family if he did not come home from the Capitol afterward.

Further evidence showed how Rhodes continued to assert election conspiracy theories even after the mob at the Capitol left people dead in its wake.

At around 11:30 p.m. the night of Jan. 6, 2021, he wrote in an Oath Keepers group chat: “Patriots, it was a long day but a day when patriots began to stand. Stand now or kneel forever. Honor your oaths. Remember your legacy.”

One of the trial’s more alarming moments came when prosecutors played an audio recording of a meeting Rhodes held with an acquaintance just a few days after the riot. In the recording, Rhodes expressed regret that the Oath Keepers hadn’t just gone ahead and brought their rifles to Capitol Hill.

“I’d hang fuckin’ Pelosi from the lamppost,” he said in a Texas parking lot. Rhodes dismissed the comment as alcohol-induced bluster.

Prosecutors clearly focused much of their efforts on Rhodes.

Jurors were instructed, however, not to see that as a reason to let the others off the hook.

“An equal role is not what the law requires, and a defendant does not need to perform any specific act beyond joining the conspiratorial agreement,” the jurors’ instructions read.

Another four Oath Keepers are expected to go on trial on sedition charges in December, along with a group of Proud Boys.