On North Korea and Iran, Bolton Blames â€˜the Split Between Trump and Trumpâ€™ 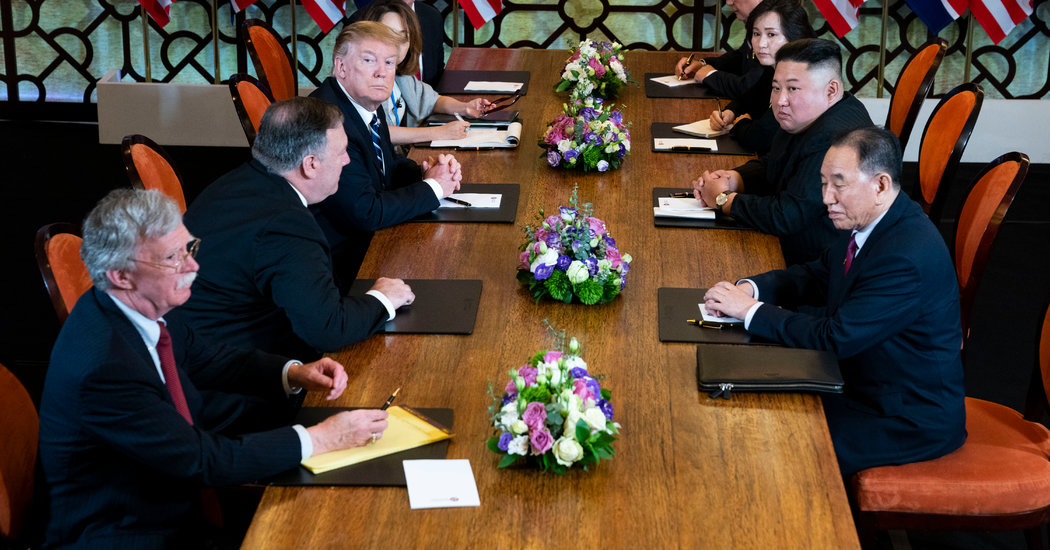 And Mr. Trump, distracted by the fact that his former lawyer Michael D. Cohen was testifying back in Washington about the presidentâ€™s private financial and personal dealings, was desperate to announce something, anything, that would seem big enough to drive Mr. Cohen off the front pages.

â€œTrump asked me how we could be â€˜sanctioning the economy of a country thatâ€™s 7,000 miles away,â€™â€™â€™ Mr. Bolton recalls. â€œI answered, â€˜Because they are building nuclear weapons and missiles that can kill Americans.â€™â€

â€œThatâ€™s a good point,â€ the president agreed. As Mr. Bolton recalled, it was just â€œanother day at the office.â€

The biggest risk in American foreign policy, he concluded, was the president undercutting his own administrationâ€™s policies, what he terms â€œthe split between Trump and Trump.â€

All of this should have been predictable to Mr. Bolton, who had met Mr. Trump at the White House on several occasions as the president considered replacing Lt. Gen. H.R. McMaster, with whom he had never seen eye-to-eye. Mr. Trump had been impressed by Mr. Boltonâ€™s tough talk on Fox News, where he was a commentator. (This was long before Mr. Trump was declaring, as he did in an angry tweet the other day, that Mr. Bolton was â€œa washed-up guyâ€ when he hired him.)

Mr. Trump, according to Mr. Boltonâ€™s account in â€œThe Room Where It Happened,â€ told his new national security adviser early on that he had assured Israelâ€™s prime minister, Benjamin Netanyahu, that â€œif he uses forceâ€ against Iran, â€œI will back him.â€ He asked Mr. Bolton to reinforce the message during one of his first official trips to Israel.

But it was unclear what Mr. Trump meant by â€œback himâ€ â€” and whether that support would be largely rhetorical or whether it meant the United States would provide military reinforcements if a conflict with Iran escalated. The Obama administration had sent Mr. Netanyahu a much more qualified message: that it would support Israel if it was attacked by Iran, but should not be counted on to enter a conflict if Mr. Netanyahu began it with a unilateral military strike, taken without prior agreement with the United States.