On racism and football, itâ€™s England vs. their fans 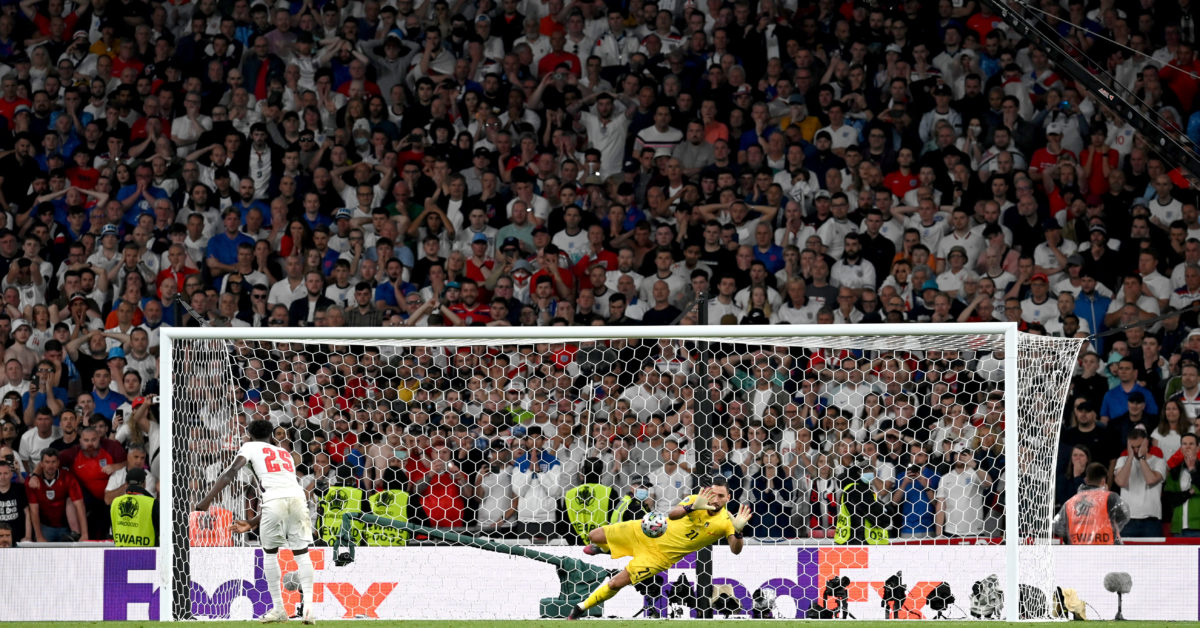 Jude Wanga is a writer, activist and editor at the New Socialist.

LONDON â€” When it comes to sports, and football in particular, what we have is a tale of two Englands. Thereâ€™s the team, and then thereâ€™s a sizeable section of its fans. The contrast between these two Englands has always been notable, but this yearâ€™s circumstances swelled it to a crescendo. And the juxtaposition between these two halves was on full display during the Euro 2020 final last weekend at Wembley stadium in London.Â

In a different England, we could have been talking about Gareth Southgateâ€™s poor game management, Luke Shawâ€™s impressive strike or whether dropping Bukayo Saka was the right thing to do. But instead, we find ourselves discussing how even as the England team played its tough final game against Italy, many of its fans engaged in violent and racist behavior.Â

First, letâ€™s look at the team. This yearâ€™s squad wasnâ€™t just a collection of players from various teams and leagues â€” a pick and mix of the brightest from the biggest â€” as it has been in past generations. They had a cohesion previously unseen in our national teams, and that allowed it to achieve what the others could not: to make it to the final of a major tournament.Â

And even as they excelled on the pitch, they also stood out off of it, taking on causes like child hunger or standing up to racism. This included Marcus Rashford, who in the middle of a pandemic decided to do the very simple basic thing of trying to make sure the poorest children in the nation were kept fed â€” a fight that even opposition political parties were not fighting full throated.Â

It included Jordan Henderson, who embraced the LGBTQ+ laces and armband and had a poignant exchange with a fan on LGBTQ+ inclusion in football. And it also included Tyrone Mings, brave enough to connect the racist abuse that followed the final match with the utterings of the British Home Secretary, Priti Patel, who had pointedly refused to condemn fans who booed players for taking a knee in support of Black Lives Matter protesters.Â

Now, contrast that with the behavior of at least some of the teamâ€™s supposed supporters: those who boo the national anthems of other countries, who boo their own players for taking a stand against racism, who demand they â€œkeep politics out of football.â€Â

The aggression and anger that spilled out across the country before and after the match had already been in the post since Brexit, and probably even before then. Our nation has an unhealthy relationship with alcohol and is in denial about bigotry. That these two toxic strands would meet in a sport that elicits extreme emotions was an unhappy coincidence, but also utterly predictable.Â

Hooliganism is the gangrenous leg of English football. No matter how much you try to pretend that the pus and smell isnâ€™t growing more and more inescapable, it is there â€” a festering pungent reminder of the dark side of this sport we all love. There is also no point in pretending there is no link between the mindless violence of hooliganism and far-right sympathies. The far right have always preyed upon the forgotten working-class communities to find willing soldiers for their bourgeois ideology, dressed up as civic nationalism.Â

It also should have come as no surprise to the government or the police that there would be mass alcohol consumption with an entire weekend to build up before kickoff. Having just spent the better part of 18 months locked up at home with very few opportunities for mass socializing, most of the revelers on Sunday were quite young and simply woefully unprepared for the day. Official fan zones could have been set up to contain supporters, but they werenâ€™t.Â

The result: People who had been drip fed a diet of hatred and bigotry for the last five years, who (despite drinking more in general during the lockdown) were out of practice in terms of consuming alcohol in social settings, suddenly found themselves with a whole day of drinking to be done before the U.K.â€™s biggest event in sporting history in 50 years.Â

There is a real issue when it comes to how these two increasingly alien Englands, footballers and their fans, can coexist. A squad that is at odds with its supporters is not a successful squad. Fans who boo their own players, other countriesâ€™ national and behave in such a way that it disrupts the concentration of the team, arenâ€™t long for the stadium.Â

One explainer for this divergence is that these misbehaving fans are simply of another era, and struggle to find a way to adapt to the modern world. Itâ€™s important to remember that the events of this weekend lie at the feet of a persistent but small minority of England fans. Whereas most of the teamâ€™s supporters have spent the last few years going through an attitude change that they should be given credit for.Â

But football, as a sport, has always lent itself well to toxic masculinity, a staunch ally of right-wing populism. It was entirely predictable, then, in a country as politically divided on the big social issues of the moment â€” borders, immigration, gender fluidity â€” that its fractures would cut across the England squad and a significant cross-section of its supporters.Â

We are at an extremely dangerous crossroads as a society, and the diverging paths ahead have become even more visible after the weekend. The idea that diversity and inclusion is an existential threat to â€œEnglishnessâ€ and â€œBritishnessâ€ is a sinister train of thought that, throughout history, has led to devastating consequences.Â

Until we, as a nation, can have honest discussions where opinion and fact are properly delineated as opposed to held up as equals, these scenes will continue to unfold â€” especially if, concurrently, right-wing populist politicians, including those in the government, continue to sow the seeds of division and stoke the fires of hatred.Â