Opinion: For Putin, Kazakhstan is a domino too big to fall 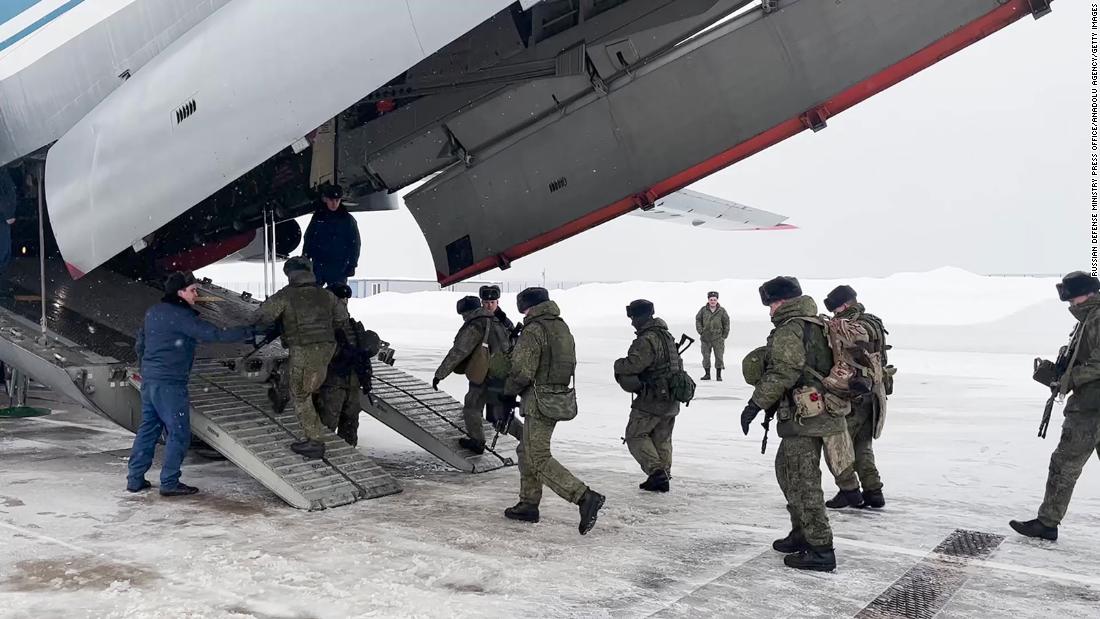 The roughly 100,000 Russian troops stationed near Ukraine constitutes the biggest security crisis in years for Europe and its allies, including the US. While in Kazakhstan, Russian President Vladimir Putin took this month’s brutal crackdown from the regime’s President Kassym-Jomart Tokayev as an opportunity to remind protesters revolutions will never be allowed to spread in the region and by deploying Moscow-led security alliance troops to help quell the unrest, the central Asian country remains firmly in his sphere of influence.
The tone of Putin’s rhetoric and the trajectory of military deployment leave little doubt over his intentions: to regain control over a wide swath of the former Soviet Union — even to the point of rolling back the footprint of the North Atlantic Treaty Organization (NATO) to the Cold War years. Indeed, during high-stakes NATO-Russia talks in Brussels last week, the chief US negotiator, Deputy Secretary of State Wendy Sherman, told CNN Moscow had made no commitments to deescalate on the Ukrainian border.
Overhanging the US negotiations is a desire by the Biden administration to avoid a distraction from its intended pivot to the Indo-Pacific, especially resetting relations with China. But with many analysts agreeing threats of new, stinging sanctions have not deterred Russia’s adventurism in Europe, western diplomats may be negotiating with a largely empty toolbox.
The stakes for Putin are equally high. In the span of less than two years, Russia has had to manage two surprise uprisings on its doorstep: in Belarus and Kazakhstan. But from the Kremlin’s point of view, Kazakhstan, the largest of the former Soviet republics in central Asia, is a domino too important to fall.
Allowing Kazakhstan to drift further into a western orbit — for example, allowing for western-style democratic elections or responding to the popular outcry with more political freedoms — would be a blow to Russian pride and would indicate Moscow’s loosening the grip over an area rich in natural resources that has attracted billions in investment from the US and China. Kazakhstan has the world’s 12th-largest proven oil reserves and is 14th for gas. In 2019, it produced almost half of the world’s uranium, according to the World Nuclear Association. The last thing the Kremlin wants is another so-called color revolution to flourish which could inspire protest movements in Russia and other former Soviet republics.
The recent unrest in Kazakhstan was prompted by rising fuel prices and frustrations with everything from unemployment and inflation to corruption. It spiraled into protests reflecting “anger, misrule against a corrupt government that has been very authoritarian and social inequality,” said Edward Lemon, president of the Oxus Society for Central Asian Affairs. The subsequent government crackdown resulted in at least 164 deaths and thousands of arrests.
True to form, tactics used to suppress uprisings in Belarus were employed in Kazakhstan: a brutal crackdown, sowing disinformation, blaming unspecific foreign troublemakers, the throttling of social media — including for the first time the popular Chinese app WeChat — and creating no space for dialogue.
Moscow quickly agreed to President Tokayev’s request for the Collective Security Treaty Organization (CSTO), a Russian-led regional security alliance, to send “peacekeepers” to help restore order. Putin had every reason to step in. If Russia loses Kazakhstan from its sphere of influence, it could inspire pro-democracy movements in other former republics.
But of grave importance is what the rest of the world — particularly China — learns from how the current drama plays out. Chinese President Xi Jinping will likely be observing closely how far Putin can push the West, and will almost surely apply that learning to Taiwan and other potential territorial adventures. Russia’s participation in high-level diplomatic meetings while maintaining a threatening posture, only to walk away declaring talks had hit a “dead end” and it will have to take action to “eliminate unacceptable threats to our national security” is a master stroke of tantrum diplomacy potentially applauded in Beijing.
Now, with Beijing and Moscow ramping up their coordination efforts on foreign policy, China can draw useful lessons watching how far Putin can test the West’s resolve. For a China bent on “reunification” with Taiwan — the breakaway island where the US is a security guarantor — and pressing its territorial claims in the South China Sea, it is well worth observing closely where the West sets its redlines and how it does (or doesn’t) uphold them.
While Kazakhstan may be a wobbling domino on Putin’s regional game board, the country has also become an important piece in the geopolitical strategy of China for energy independence, meaning the unrest there is of direct importance to Beijing. China-linked firms reportedly have as much as $26 billion in investments in Kazakhstan, including in an oil pipeline which crosses the roughly 1,100 mile Sino-Kazakhstani border. In 2017, Kazakhstan was also a major recipient of Chinese money from its multi-billion-dollar Belt and Road Initiative.
China’s economic interests in Kazakhstan may have western diplomats hoping Beijing encourages the Kremlin to exercise restraint when maintaining stability in the country. China said it supported the Russian-led forces deployed to Kazakhstan to quell the uprising.
Meanwhile, the US, which has plenty at stake as the leading foreign investor in Kazakhstan and with three decades of good bilateral relations, must continue to engage with the new circle of officials created around Tokayev, and press its case on why suppressing freedom of expression makes for a toxic investment climate. But the US does so with the realization that investors from countries accused of disregarding human rights such as China will happily fill any business void.