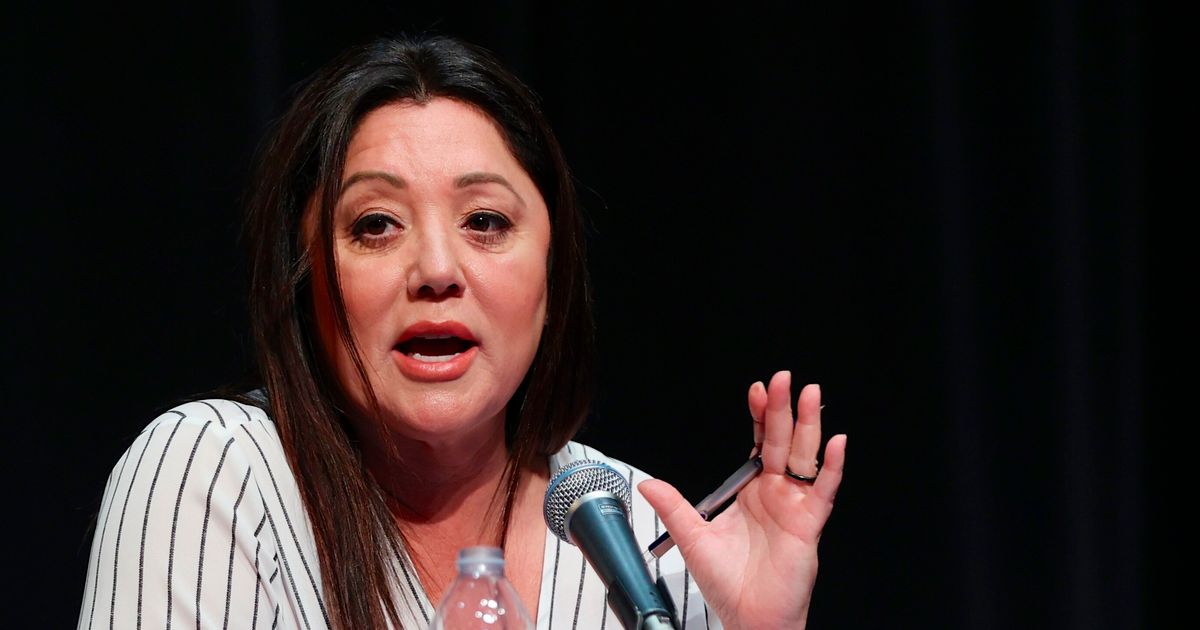 With days to go before the midterm elections, a funny thing is happening with GOP congressional candidates in Oregon: They’re pretending they’re moderate, reasonable people after months of fueling election conspiracies in plain sight.

Take Alek Skarlatos. For the last year and a half, he’s refused to say that Joe Biden won the 2020 presidential election, fair and square.

He had “no comment” in May 2021 when asked who he believed won the election. He was asked again last month to “state without equivocation who won the 2020 presidential election.” He wouldn’t. Instead, he said only that Biden is the president, without addressing the validity of the election ― a common dog whistle among Republicans who don’t want to anger former President Donald Trump’s base of supporters by saying Biden fairly beat him.

Skarlatos, who is running against Democrat Val Hoyle for an open seat, has also downplayed the Jan. 6, 2021, attempted coup at the U.S. Capitol. He said in May 2021 that many of the people involved in the insurrection ― an attack that resulted in at least seven people dead, more than 140 police officers injured and $1.5 million of damage to the building ― simply walked into the Capitol and didn’t know they were forcing their way in, and shouldn’t be charged with trespassing.

Skarlatos’ views and those of other Republicans running in Oregon this year show that the Big Lie has permeated into even blue states — where GOP candidates in competitive races either believe or choose to espouse them.

A quick review of Skarlatos’ Twitter feed shows that he’s been liking posts that suggest the 2020 election was stolen, a lie pushed by Trump after he lost.

Among the tweets Skarlatos has liked in recent months: an August tweet that states “The FBI rigged the 2020 election,” a July tweet fueling a conspiracy theory that a federal informant staged the Jan. 6 insurrection, another July tweet fueling that same conspiracy theory, and a June tweet mocking whistleblowers as “con artists” and “professional liars” who credibly testified about Trump’s abuse of power against Ukraine President Volodymyr Zelenskyy and about Trump’s efforts to instigate the Jan. 6 insurrection.

But when HuffPost asked Skarlatos last week if he believed that Trump won the election or that the FBI rigged it, he responded as if the question was absurd.

“Let me be clear: Joe Biden won the 2020 election,” Skarlatos said in a statement. “And like Barack Obama, if he offered me a meeting in the Oval Office, I would accept that invitation to discuss solutions to help our country.”

“I also oppose all violent protests,” he added, “including Black Lives Matter and January 6th.”

Skarlatos’ mention of Obama is intentional: He’s featured the former Democratic president in his ads to suggest he is moderate. Skarlatos, a former Army National Guardsman, met Obama in 2015, after he and two friends stopped a terrorist on a Paris-bound train. At the time, Obama said the three “represent the very best of America.”

But Obama’s team last month publicly rejected Skarlatos’ ads, calling them “purposely misleading” and saying Skarlatos is “deeply out of step” with Obama’s positions on climate change and the Affordable Care Act.

Fellow Oregon GOP congressional candidate Lori Chavez-DeRemer has spent months casting doubts on Biden’s 2020 win and on the events of Jan. 6 ― and would like you to forget about all that now. She’s in a dead heat with Democrat Jamie McLeod-Skinner.

In a Q&A published last week with Oregon Public Broadcasting, Chavez-DeRemer was asked directly if she believes there was widespread voter fraud in the 2020 election. She wouldn’t answer. Instead, like Skarlatos, she said only that Biden is the president.

She wouldn’t give a clear answer back in April either, when OPB asked her if she believed Biden won in 2020.

“I think that there’s some question to what people felt,” Chavez-DeRemer said, despite there being zero evidence of widespread voter fraud. “People were, at least voters I talked to, they felt like it was unusual.”

She avoided answering the question yet again in an April story in The Oregonian, when asked if she agreed Biden was the winner of the 2020 election.

“The fact that there are millions of Americans that doubt the integrity of the 2020 election should concern all of us,” she said. “According to the Heritage Foundation, Oregon is ranked 48th in the nation in election integrity.” (Oregon leaders are actually very proud of their long-established mail-in voting system.)

Chavez-DeRemer has also appeared to sympathize with the Jan. 6 insurrectionists and blamed the press for playing a role in the attack that day.

“When you feel like your vote no longer matters and you’re being disenfranchised as an American, and we have a protected right for people [sic] peaceful protesting, we should have been allowed to do so,” she said of the rioters behind the attempted coup, during an April candidate debate. “So I think the media had something to do with all of that.”

What is “even more shocking” than an attempted coup, she added, is that some of the rioters may have been held in jail without due process. (All of the Jan. 6 defendants were arraigned and had bail hearings, so it’s not clear what violations she’s referring to).

Despite all of these claims being made in public and a matter of record, Chavez-DeRemer has more recently been denying that she ever cast doubts about the 2020 election or the Jan. 6 attack. In a combative debate last month hosted by KZTV, McLeod-Skinner appeared to catch her in a lie about it.

“What I do not believe are the attacks on our democracy that she has supported,” said McLeod-Skinner, referring to Chavez-DeRemer. “She has supported the Jan. 6 insurrectionists who attacked our Capitol, resulting in the death of several Capitol police officers.”

“That’s just nonsense,” Chavez-DeRemer replied, without addressing any of the previous claims she’s made on this topic. “That’s an outright lie.”

When McLeod-Skinner again accused her of sympathizing with the Capitol rioters, Chavez-DeRemer replied, “It’s an outright lie. I just can’t even believe that you say that. I don’t even know where you got that from.”

Their debate ended with Chavez-DeRemer saying of course she believes that Biden is the president, which, again, is not the same thing as saying the election was legitimate and free of widespread fraud, which it was.

“We know that President Biden is the president of these United States,” said Chavez-DeRemer. “I know that. My opponent knows that.”

McLeod-Skinner pointed out that, again, with Chavez-DeRemer’s choice of words, “There was reference to Biden, but never an acknowledgement he actually won.”

Chavez-DeRemer’s campaign did not respond to a request for comment on whether she believes Biden fairly won the 2020 presidential election, on what she meant when she said the people behind the attempted coup had a right to peacefully protest, and why she thinks the media had something to do with causing the violent attack.

Then there’s Oregon’s GOP congressional candidate Mike Erickson, who is really hoping people don’t remember how much he used to prioritize the issue of election fraud.

Erickson, an enthusiastic Trump supporter, prominently featured language about election fraud on his website ― until he won his primary in mid-May, at which point he scrubbed all of it.

A web archive of his homepage from late April shows that it used to list “guaranteeing free elections that are untainted by fraud” as a top priority. Now, that’s nowhere to be found.

His website used to have a section on election fraud, too. In mid-May, it read, “Ensuring that our elections are free, fair, and not tainted by fraud is essential to our democracy.” He vowed to sponsor legislation to ban ballot harvesting, which is when someone collects and submits absentee or mail-voter ballots for other people, and to require election audits. But as recently as late last month, that section was removed and replaced with a new section about climate change. Here’s an archived link to this page on his website on Oct. 23 versus Wednesday.

Unlike the other GOP congressional candidates in this story, Erickson told The Oregonian in April that Biden won the 2020 election and that it is “critically important to our democracy that Americans accept election results even when their candidate is narrowly defeated.”

But during his primary race, he played up concerns about election fraud in the state-issued Voters Pamphlet. He used the same information in this pamphlet that he originally featured on his website about cracking down on election fraud.

And in an eerily Trumpian move, Erickson last month threatened to file a lawsuit to overturn the results of his election if his Democratic opponent wins.

Erickson sent a cease-and-desist letter to his Democratic opponent, Andrea Salinas, relating to an ad by Salinas’ campaign about Erickson’s 2016 guilty plea for driving under the influence. In the letter, obtained by Oregon Capital Chronicle, Erickson threatens legal action if Salinas wins, leaning on a state law that allows for elections to be overturned if a judge finds that the winner made a false statement that changed the election’s outcome.

“Your false ad could have dire consequences for you if you win this election because of how close the race is,” Erickson’s attorney wrote. Pointing out how tight their race is, the letter continues, ”This increases the likelihood that you would be deprived of a successful election if it can be shown that the false ad influenced voters to not vote for Mr. Erickson.”

On Tuesday, Erickson denied to HuffPost that he ever threatened to overturn the election results of his race if he lost.

Asked if he had any response to the Oregon news article pointing out that his lawsuit is effectively threatening to overturn the election result, Erickson’s spokesperson emailed the same statement from Erickson claiming he never said he would deny the election outcome.

As for the reason for Erickson scrubbing his website of election fraud language, his spokesperson said only that that he “believes election integrity is very important.”

“I can’t speak to website changes,” said the spokesperson, “yet I know that currently, citizens are most concerned about the economy and inflation right now.”