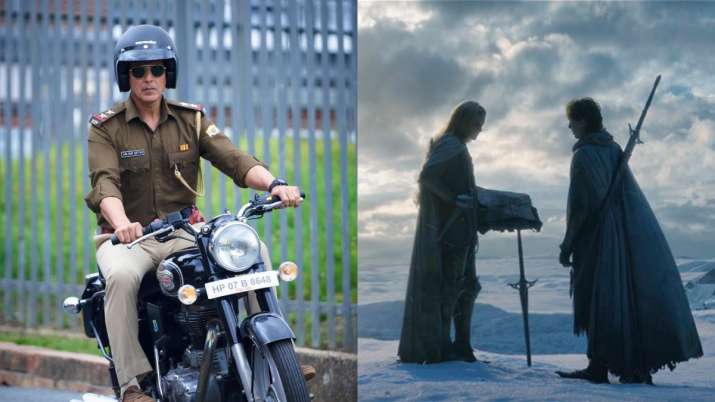 OTT Movies and Web Shows Releasing This Weekend (Sept 2): The first week of September has an interesting lineup of movies and web shows on various OTT platforms including Netflix, Disney+ Hotstar, Amazon Prime Video, Voot Select, Zee5 and others. While The Lord of the Rings: The Rings of Power will quench your thirst for fantasy and adventure, Akshay Kumar starrer Cuttputlli will provide you with action and thrill. So grab your popcorn to binge-watch exciting movies and shows on OTT this weekend.

In Cuttputlli, Akshay Kumar plays Arjan Sethi, a dutiful sub-inspector who took an oath to keep the people of Kasauli safe. Produced by Vashu Bhagnani and Jackky Bhagnani, Deepshikha Deshmukh and Pooja Entertainment and directed by Ranjit M Tewari, ‘Cuttputli’ unmasks the killer and decodes the mystery using Arjan’s skills to understand the psyche of the murderer.

Lord Of The Rings: Rings Of Power

The epic drama is set thousands of years before the events of J.R.R. Tolkien’s ‘The Hobbit’ and ‘The Lord of the Rings’ books, and promises to take the viewers back to an era in which kingdoms rose to glory and fell to ruin with unlikely heroes being tested.

One of the greatest villains, which came out of Tolkien’s ink, will threaten to cover all the world in darkness. The starcast of the series was recently in Mumbai where they soaked in the colours of the city which is known for its heritage and hustle culture. ‘Lord Of The Rings: Rings Of Power’ will be released in English, Hindi, Tamil, Telugu, Malayalam and Kannada, with new episodes dropping in every week.

The show, which is said to be inspired by the hit international series ‘The Real Housewives’, takes into account the personal and professional lives of Neelam Kothari, Maheep Kapoor, Bhavna Pandey and Seema Khan, wives of Bollywood actors Samir Soni, Sanjay Kapoor, Chunky Panday and Sohail Khan, respectively.

‘Khuda Haafiz: Chapter 2 – Agni Pariksha’ is an action-thriller film and a sequel to the 2020 film ‘Khuda Haafiz’. The film is written and directed by Faruk Kabir and produced by Kumar Mangat Pathak, Abhishek Pathak, Sneha Bimal Parekh and Ram Mirchandani under the banner of Panorama Studios. The film was released in theatres on July 8 and is not premiering on OTT.