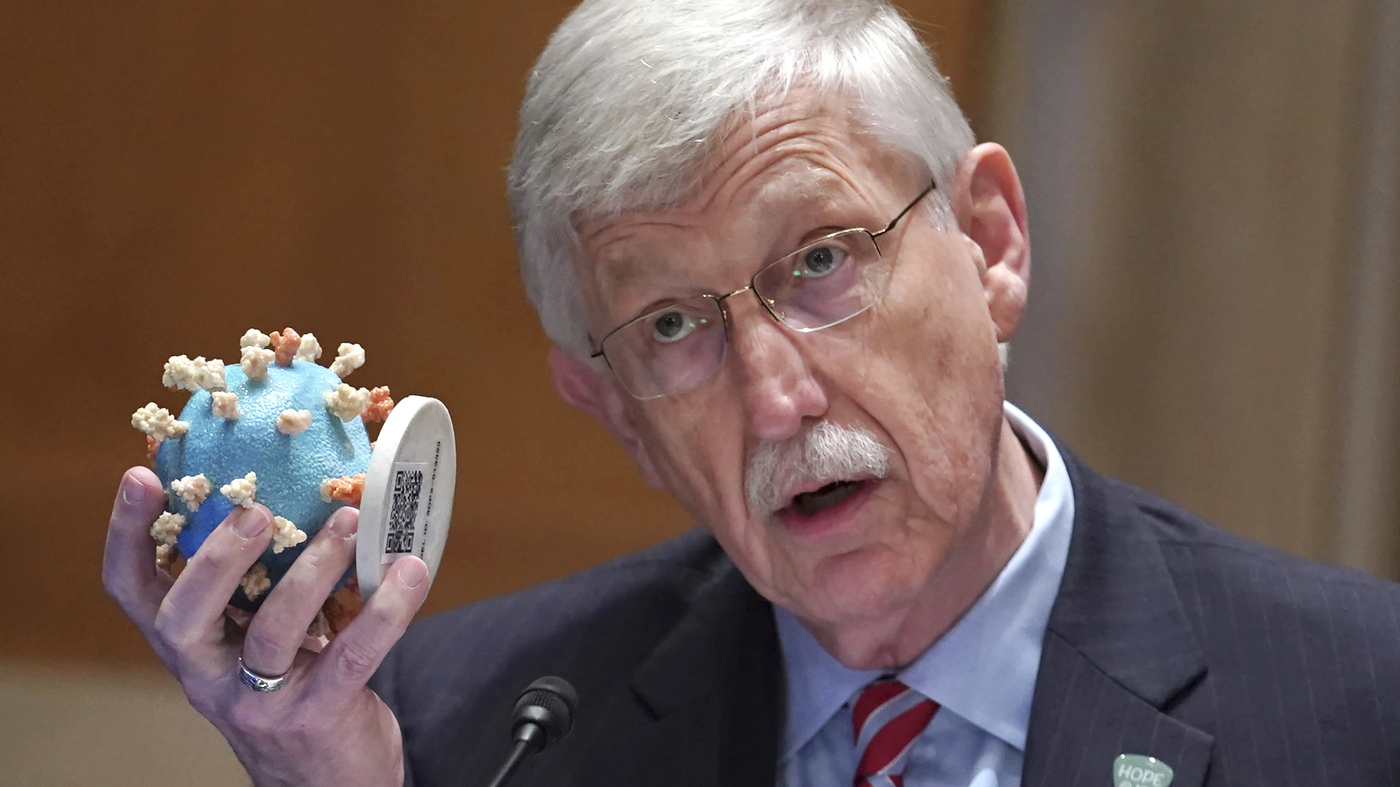 NIH Director Dr. Francis Collins holds up a model of the coronavirus as he testifies before the Senate in May. Collins is retiring as director of the NIH.

NIH Director Dr. Francis Collins holds up a model of the coronavirus as he testifies before the Senate in May. Collins is retiring as director of the NIH.

On his last day as director of the National Institutes of Health, Dr. Francis Collins’ frustration was evident.

“I get upset because people point to anecdotes of somebody who got sick even though they had been vaccinated and say, ‘There, you see, it doesn’t work,’ ” Collins told Fox News Sunday guest host Bret Baier. “That’s way too simplistic.”

As the omicron variant of COVID-19 is set to wend its way through the American population — wreaking particular havoc on the unvaccinated — 50 million vaccine-eligible Americans still haven’t gotten even one dose of COVID-19 vaccine. “How did that happen?” Collins asked. “How did we get all of this so mixed up with social media, misinformation, and political insertion into the discussion? This is the thing for me on my last day as NIH director that I find particularly frustrating.”

Collins’ last day comes as the virus is ravaging the unvaccinated — who often tend to be Fox News viewers. An NPR investigation this month found that vaccination rates are far lower in counties that strongly supported Donald Trump during the last presidential election. People in counties that went 60% or higher for Trump have been almost three times as likely to die from COVID-19. Studies have found that Fox News viewers are more likely to believe COVID-19 misinformation.

“We’ve got to remember, this is the enemy,” Collins said, referring to the virus. “It’s not the other people in the other political party. It’s not the people on Facebook who are posting all sorts of crazy conspiracies. This is the enemy. We in this country have somehow gotten all fractured into a hyper-polarized, politicized view that never should have been mixed with public health. It’s been ruinous and history will judge harshly those people who have continued to defocus the effort and focus on conspiracies and things that are demonstrably false.”

On CBS’ Face the Nation Sunday, Collins warned that with its dozens of mutations, the omicron variant “has the properties to potentially be evasive of the vaccines.” Collins urged the 60% of Americans who are eligible for a booster shot but haven’t gotten one to take action.

One monoclonal antibody treatment is still effective against omicron

Collins also noted that only one available monoclonal antibody treatment — made by GlaxoSmithKline and Vir Biotechnology — seems to be effective against the omicron variant. Regeneron’s cocktail — known as REGEN-COV — has “diminished potency” against omicron, the company acknowledged last week.

GSK-Vir’s treatment “still sticks to the spike protein that omicron has,” Collins said — key to protecting people against the virus. There is a push to produce more of that treatment, Collins said, adding that health officials will have to save that treatment for people who are at higher risk.

Collins also acknowledged the news from Pfizer that two doses of its vaccine are likely not enough to protect children under 5. That delays plans to introduce vaccinations for kids aged 2-4, as Pfizer now studies the effectiveness of a three-dose regimen. “Really we ought to think about surrounding them with vaccinated people to keep them from getting infected,” Collins said.

Omicron is particularly concerning because of its “extraordinary” transmissibility, Dr. Anthony Fauci said on ABC News’ This Week. Omicron has a “doubling time” of just 2-3 days, he said. That’s the time it takes for the number of coronavirus cases to double — and it’s faster than delta, the current dominant strain in the U.S.

Based on data out of South Africa, where omicron has already been running through the population, it appears that the omicron variant leads to less severe symptoms and requires less hospitalization. But that might be due to other factors, Fauci said, like “the fact that their population has so much experience with prior infections that it might be underlying immunity that’s making it look like it’s less severe.”

And even if omicron does turn out to be less severe than delta, the sheer number of expected omicron infections is likely to overcome the “slight-to-moderate diminution in severity,” Fauci said, warning that U.S. hospitals “are going to be very stressed with people.”