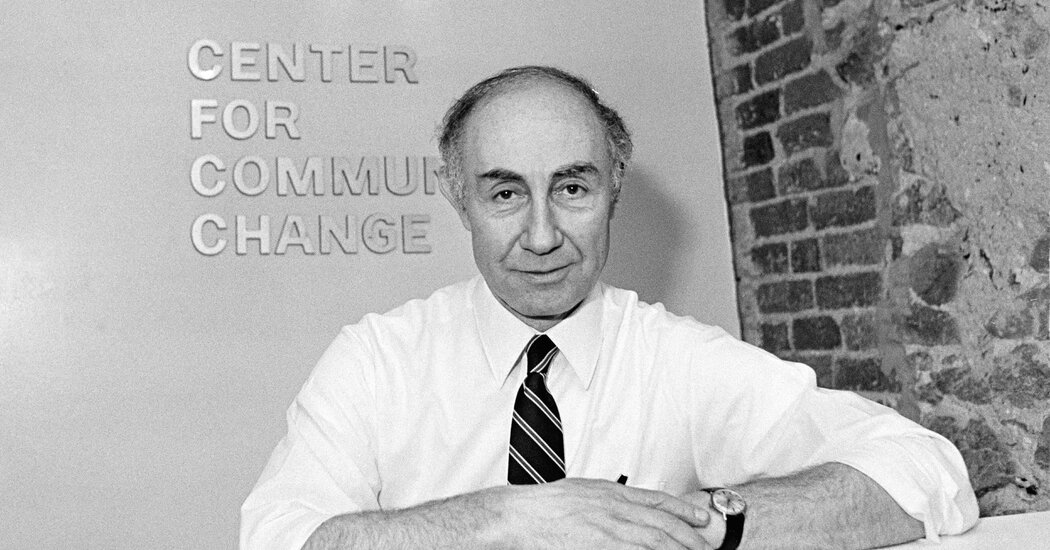 Pablo Eisenberg was only 7 years old in 1939 when he boarded an American-bound liner with his parents and younger sister in Bordeaux as the Nazis were poised to invade France. But as young as he was, their nail-biting escape nevertheless instilled in him a lifelong commitment to powerless people left behind.

That was manifested in 1973, after he had spent years in government and the nonprofit sector working on behalf of the underprivileged, when he wrote an article for a philanthropic journal that would alter his professional trajectory and jolt the world of charitable giving.

In the article, published in Grantsmanship Center News, Mr. Eisenberg, who died at 90 on Oct. 18, called on major foundations, individual donors, corporate charities and philanthropies in general to be more socially responsible, transparent, accountable and equitable in determining who received their largess. To further the cause, he established a nonprofit consultancy to provide technical help to grass-roots neighborhood organizations seeking philanthropic assistance.

“Rushing out of France deeply influenced him,” said Mary Lassen, a former managing director of what is now Community Change, a Washington-based advocacy group for the poor, originally funded by the Ford Foundation, that Mr. Eisenberg ran as executive director from 1975 to 1998. “He wanted to make change in the world. He had a passion for improving the lives of everyday people.”

In the article, which received national attention, Mr. Eisenberg posed a simple question: Who benefited more from philanthropy, those who got it or those who gave?

His question came in the form of a critique of a national commission on private philanthropy that had been suggested by John D. Rockefeller III and run by John H. Filer, the chairman of the Aetna Life & Casualty Company.

The group, composed of public officials and business executives, had been set up to study the impact of tax-code changes and regulations that might impact philanthropy. But Mr. Eisenberg argued that the commission, and the philanthropic world in general, were neglecting the needs of the public, were unrepresentative and failed to be accountable, accessible and equitable.

“You can’t say you have a serious priority on poor people unless you are willing to fund them,” he recalled in a 1998 interview with Shelterforce, an online publication that covers community development.

His challenges to foundation funding were initially rebuffed but later embraced by Mr. Filer and other enlightened philanthropists, who joined with him in helping to establish the National Committee for Responsive Philanthropy, a watchdog group.

While many charities remained insular, others responded to Mr. Eisenberg’s goading by directing more donations to community organizations and diversifying their boards by including representatives of those organizations.

“I saw him scold foundation presidents for their failure to invest in grass-roots organizing, for their neglect of racial justice, for failing to give groups general support and long-term funding, and for being inaccessible and haughty,” Deepak Bhargava, a former president of Community Change (originally called the Center for Community Change), wrote in a tribute to Mr. Eisenberg. And, he added, “He argued that we needed to do more to bring in middle class and centrist forces into the struggle against poverty.”

“I believe in empowerment, as I think almost everyone does,” Mr. Eisenberg told The Los Angeles Times in 1986. “The purpose of empowerment and self-help is not to guarantee that everyone will succeed, but to provide equal opportunities for everyone.”

Pablo Samuel Eisenberg was born on July 1, 1932, in Paris to an American Jewish couple who had been living in Europe since the early 1920s: Maurice Eisenberg, a cellist, and Paula (Halpert) Eisenberg, a homemaker.

A few weeks after Germany invaded Poland in September 1939, the family sailed for the United States and settled in Maplewood, N.J., where Pablo — who was named after his godfather, the cellist Pablo Casals — attended Millburn High School.

He wanted to play the cello, too, but he had taken up another string instrument: He was captain of the tennis teams at Princeton and Merton, and he was establishing himself as a star on the tennis circuit.

Mr. Eisenberg played at Wimbledon five times and made the quarterfinals alongside John Ager in 1955. He won a gold medal at the 1953 Maccabiah Games in Israel and in 1954 was ranked ninth in the United States in doubles.

After college, he served two years in the Army before joining the U.S. Information Agency for three years, serving in Senegal. He then served for two years as a program director for Operation Crossroads Africa, a progenitor of the Peace Corps. He was later director of Pennsylvania operations for the federal Office of Economic Opportunity and deputy director of its research and development division in Washington. He then joined the nonprofit sector, becoming deputy director of field operations for the National Urban Coalition.

He was also president of Friends of VISTA, a nonprofit supporting the federal agency for community service and volunteerism.

Mr. Eisenberg was a columnist for The Chronicle of Philanthropy and wrote the book “Challenges for Nonprofits and Philanthropy: The Courage to Change” (2004). After serving at Community Change, he became a senior fellow at the Public Policy Institute at Georgetown University.

His wife of 62 years, Helen (Cierniak) Eisenberg, died this year. He is survived by their daughter, Marina Eisenberg, and a sister, Maruta Friedler.

“Pablo Eisenberg was a stalwart defender of civil values across the board,” William Josephson, a former assistant attorney general in charge of the Charities Bureau in the New York State Department of Law, said in an interview. “He nurtured civil rights and poverty leaders and provided homes for fragile organizations.”