Pakistan appeals for international assistance after floods | The Express Tribune 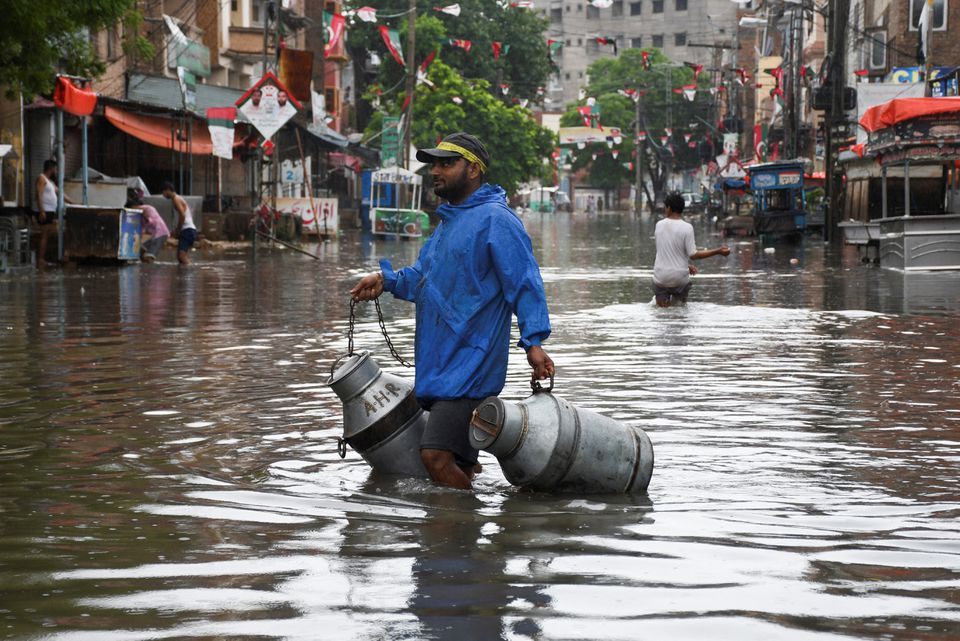 
Pakistan has urged the international community to help with relief efforts as it struggles to cope with the aftermath of torrential rains that triggered massive floods last month, killing more than 800 people, officials said.

Funding and reconstruction efforts will be a challenge for cash-strapped Pakistan, which is having to cut spending to ensure the International Monetary Fund approves the release of much-needed bailout money.

A man and a girl use a makeshift raft as they cross a flooded street, following rains during the monsoon season in Hyderabad, Pakistan August 24, 2022. REUTERS

July’s national rainfall was almost 200% above average, Sardar Sarfaraz, a senior official at the metrological office told Reuters on Wednesday, making it the wettest July since 1961.

“No question of the provinces or Islamabad being able to cope with this magnitude of climate catastrophe on their own. Lives r at risk, thousands homeless. Int’l partners need to mobilise assistance,” said Sherry Rehman, Federal Minister for Climate Change in a tweet.

A man sits with his pet monkey, as they seek charity from passersby, along a road amidst rainfall during the monsoon season in Hyderabad, Pakistan August 24, 2022. REUTERS

According to the United Nations Office for Coordination of Humanitarian Affairs (OCHA), heavy monsoon rainfall and floods have affected some 2.3 million people in Pakistan since mid-June, destroying at least 95,350 houses and damaging a further 224,100.

Sindh in the country’s south east and Balochistan in the south west are the two most affected provinces. More than 504,000 livestock have been killed, nearly all of them in Balochistan, while damage to nearly 3,000 km of roads and 129 bridges has impeded movement around flood-affected areas.

A man walks amid floodwaters with the submerged tents in the background, following rains during the monsoon season in Hyderabad, Pakistan August 24, 2022. REUTERS

The main supply route from the port city of Karachi has been cut for more than a week after a bridge linking it to Balochistan was swept away, while dozens of small dams in the province were overwhelmed.

“Federal government has also appealed to the international development partners for assistance, so reconstruction of infrastructure destroyed by the flooding can be started once the water recedes,” Ahsan Iqbal, Minister of Planning, Development and Special Initiatives said in a twitter post.

Men paddle on makeshift rafts as they cross a flooded street, amidst rainfall during the monsoon season in Hyderabad, Pakistan August 24, 2022. REUTERS

In Sindh, the government closed all educational institutions in anticipation of fresh rain forecast for Wednesday and Thursday and an airport in the Nawabshah district remains closed with the airfield almost fully submerged.

“It is a climate catastrophe of epic scale, bringing in its wake the humanitarian crisis that could well match the magnitude of the big flood that was witnessed in 2010,” said Rehman.