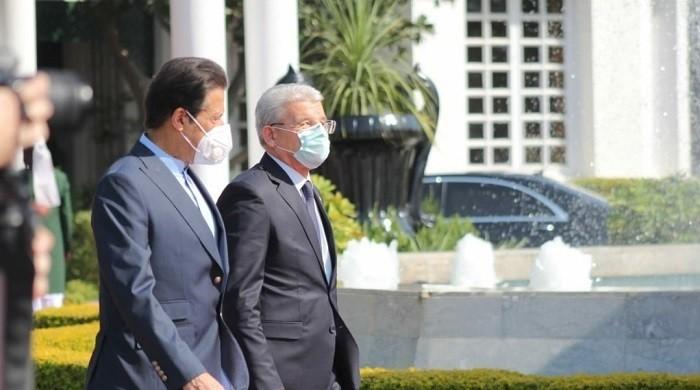 Pakistan and Bosnia on Wednesday agreed to strengthen the ties and improve trade between the two countries.

Addressing a joint press conference with Chairman of Presidency of Bosnia and Herzegovina Å efik DÅ¾aferoviÄ‡, Prime Minister Imran Khan said Bosnia has always been special for Pakistanis since the 1990s when they went through tragic events. â€œWe have always stood with the people of Bosnia.â€

PM Imran shared the two sides signed agreements and decided to improve ties. “Our trade stands at 4.5 million euros – which is nothing,” said the premier. “So we had meetings today and will continue to have meetings to improve our trade and cooperation in various fields.”

Earlier today, DÅ¾aferoviÄ‡ arrived in Islamabad on Wednesday for a two-day trip. The premier received the visiting dignitary at his residence where Dzaferovic was presented a guard of honour.

In a meeting with Foreign Minister Shah Mehmood Qureshi, DÅ¾aferoviÄ‡ called for a peaceful resolution of the Kashmir dispute in light of the United Nations Security Council (UNSC) resolution.

DÅ¾aferoviÄ‡ said Pakistan and Bosnia enjoyed close ties which will be strengthened by his visit.

Qureshi said that the two countries have always stood by each other in difficult times. He said Pakistan desired to expand relations with Bosnia in different fields including bilateral trade, education, culture and people to people contacts.

According to Foreign Office, this is Dzaferovic’s first visit to Pakistan in his capacity as Chairman of the Presidency of Bosnia & Herzegovina.

PM Imran previously met the Bosnian president on the side-lines of 14th OIC Summit in Makkah last year in May.

“Pakistan enjoys traditionally warm and friendly relations with Bosnia & Herzegovina. The two countries have extended support to each other in times of need,” said FO in a statement. “During the years 1994-95, Pakistan was a significant contributor of troops to the UN Peacekeeping Mission. Bosnia & Herzegovina provided assistance during the 2005 earthquake and 2010 floods in Pakistan.”

Stressing that high-level exchanges are an important feature of the bilateral relationship, FO said the two sides are committed to further deepen and broaden cooperation in diverse fields â€” including trade, commerce, education, culture and people-to-people exchanges.

“The visit of the Chairman of the Presidency of Bosnia & Herzegovina will serve to enhance bilateral relations and strengthen cooperative bonds between the peoples of the two countries,” reads the statement.