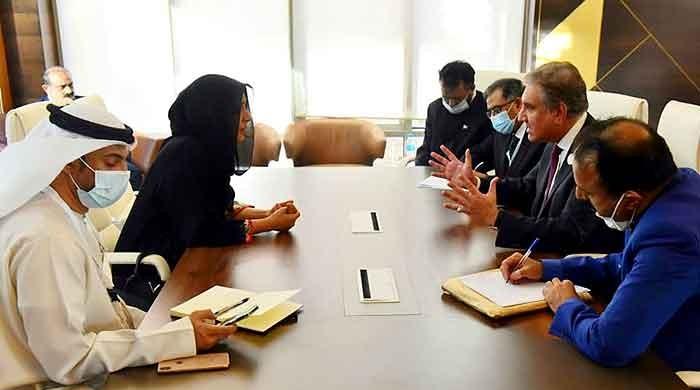 NIAMEY: Pakistan on Saturday raised the issue of visa restrictions with the UAE which has created difficulties for the citizens.

Foreign Minister Shah Mehmood Qureshi held a meeting with UAEâ€™s Minister of State for International Cooperation Reem Al Hashimi on the sidelines of the Organization of Islamic Cooperation’s (OIC) 47th session of the Council of Foreign Ministers being held in Niamey, Niger.

A statement by the Ministry of Foreign Affairs said Qureshi apprised Hashmi of the difficulties being faced by Pakistani citizens due to the recent visa restrictions. He underscored the need to address the issue at the earliest possible.

The FO said the two officials exchanged views on bilateral cooperation, coronavirus, Pakistan’s participation at the UAE Expo and other matters of mutual interest.

The foreign minister stressed Islamabad’s commitment to forge closer cooperation with the Emirates in diverse field.

A source briefed on the matter told Reuters the visas had temporarily stopped being issued to Afghans, Pakistanis and citizens of several other countries over security concerns, but did not provide details of those concerns.

“The suspension is not applicable on already issued visas,” the FO told Geo.tv on November 18. “The measure is believed to be related to the second wave of COVID-19. We are seeking official confirmation from the concerned UAE authorities in this regard.”