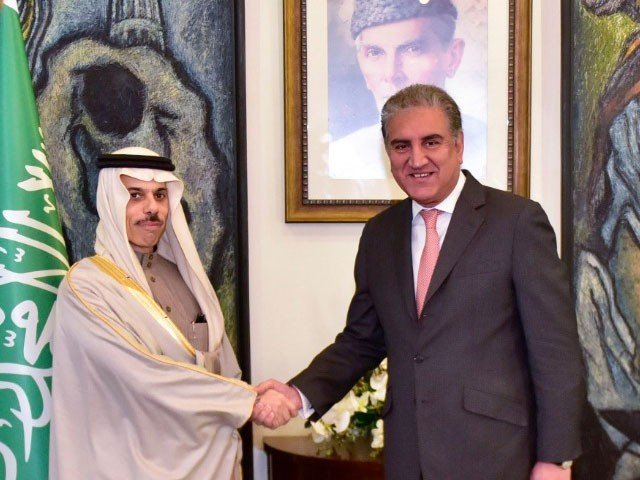 
Foreign Minister Shah Mahmood Qureshi and his Saudi counterpart Prince Faisal bin Farhan Al Saud on Monday exchanged views on the latest situation in Afghanistan and on the other issues of bilateral importance.

According to a statement issued by the Ministry of Foreign Affairs (MoFA), during the telephonic conversation, Qureshi underlined that a peaceful and stable Afghanistan is of critical importance for Pakistan and the region.

He also expressed hope that all Afghan parties would work for an inclusive political settlement to ensure sustainable peace and security in the country and the region, it added.

“Foreign Minister Qureshi thanked the Kingdom of Saudi Arabia, in its capacity as the current Chair of the OIC Summit, for convening the OICâ€™s Extraordinary Meeting at the level of Permanent Representatives on 22 August 2021 to discuss the situation in Afghanistan,” the official statement said.

Good to speak with my brother HH @FaisalbinFarhan.
➖We appreciate 🇸🇦 convening of OIC emergency meeting on #Afghanistan
➖ A peaceful Afg vital for 🇵🇰 & region
➖Imp for world to support people of #Afghanistan
➖ Pakistan is continuing to evacuate diplomats, teams & others.

The communique said that Qureshi also apprised his Saudi counterpart of Pakistanâ€™s efforts to facilitate the evacuation of personnel and staff of diplomatic missions, international organisations, media and others from Afghanistan.

In the bilateral context, the two foreign ministers reviewed the implementation of the decisions taken during the visit of the Saudi Foreign Minister to Pakistan in July.

Expressing satisfaction at the growing momentum in the bilateral relations, the MoFA added they agreed further to strengthen cooperation in diverse fields.

The two sides also agreed to continue close collaboration on all issues of common interest.

According to the FO statement, Qureshi also apprised his Swedish counterpart of Pakistanâ€™s perspective on the latest developments in Afghanistan. The foreign minister also said that in the last few days he had been in touch with several European and other foreign ministers to exchange views on Afghanistan.

â€œNo other country wanted a peaceful and stable Afghanistan more than Pakistan,â€ he said.

Also read:Â US and its allies specially India ‘main losers’ in Afghanistan: experts

He added that Pakistan had consistently advocated for an inclusive political settlement in Afghanistan as the best way forward and had been supporting efforts in that direction.

Foreign Minister Linde conveyed her governmentâ€™s deep appreciation for Pakistanâ€™s assistance in the evacuation of Swedish Embassy staff and others from Kabul.

Both the foreign ministers expressed the resolve further to strengthen bilateral relations in all spheres especially in trade, education and innovation. Qureshi also extended an invitation to his Swedish counterpart to visit Pakistan at an appropriate time.