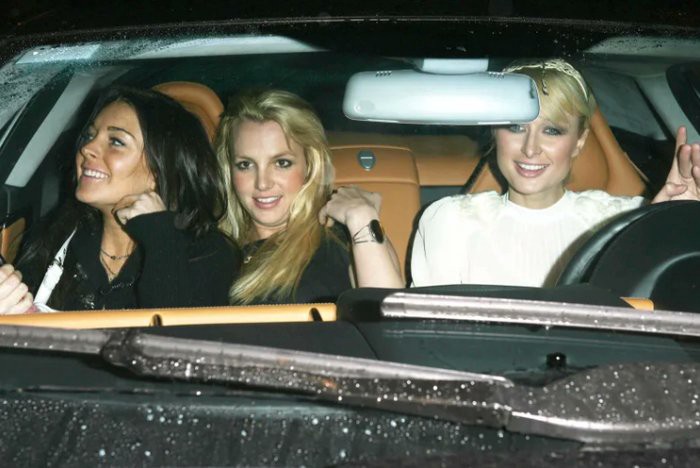 Paris Hilton is celebrating how far herself, Britney Spears and Lindsay Lohan have come.

In a new episode of her podcast This Is Paris, Hilton â€” who just celebrated her wedding to Carter Reum and is currently on her honeymoon â€” shared that it has been 15 years since she was snapped in a car with Spears and Lohan outside of the Beverly Hills Hotel.

The iconic 2006 image, which represented a specific time in celebrity culture where Hilton was the unofficial head of the young Hollywood social scene, has been discussed at great length in recent years. Hilton, who previously had a long-standing feud with Lohan, claimed that the Mean Girls star crashed her and Spearsâ€™s night out. In 2018, she explained to Andy Cohen on SiriusXMâ€™s Radio Andy, â€œI didnâ€™t want to humiliate her in front of all the paparazzi and be like, â€˜Get out of my car.â€™â€

Now, however, Hilton â€” who said she was reminded of the photo’s anniversary due to Joy Saha’s NYLON article titled “Paris, Britney, and Lindsay: The Triumph of the Bimbo Summit” â€” has nothing but kind words to say about Spears and Lohan. The â€œ…Baby, One More Timeâ€ singer was recently released from her highly controversial 13-year conservatorship and got engaged to her longtime love Sam Asghari. Lohan also recently announced she said â€œyesâ€ to marrying her boyfriend, Bader Shammas.

â€œI saw Lindsay got engaged, and I know that weâ€™ve had our differences in the past, but I just wanted to say congratulations to her,â€ Hilton gushed. â€œI am genuinely very happy for her, and it just makes me so happy to see. Fifteen years later, and so much has happened in the past two weeks. I got married, Britney got her freedom back and engaged. Lindsay just got engaged. I love seeing how different our lives are now, and how much weâ€™ve grown up.â€

Reflecting on the drama of her young 20s, Hilton, now 40, said, â€œLooking back on it, I can see how most of these problems were caused by the media. In the 2000s, thatâ€™s what it was all about. They loved pitting women against each other. Every single magazine cover would say, â€˜So and so hates this person,â€™ â€˜Feud,â€™ just causing more drama than there even was.â€

Get updates on the latest news sent straight to your inbox

She added, â€œIâ€™ve had so many stories written about me and girls that I hardly even know, or maybe met once on a red carpet and they got a photo of us. If they had no story, they would just get away with inventing a story, because thatâ€™s what sold papers. With the internet, itâ€™s changed so much, that whole landscape, but at the time, it was so vicious.â€