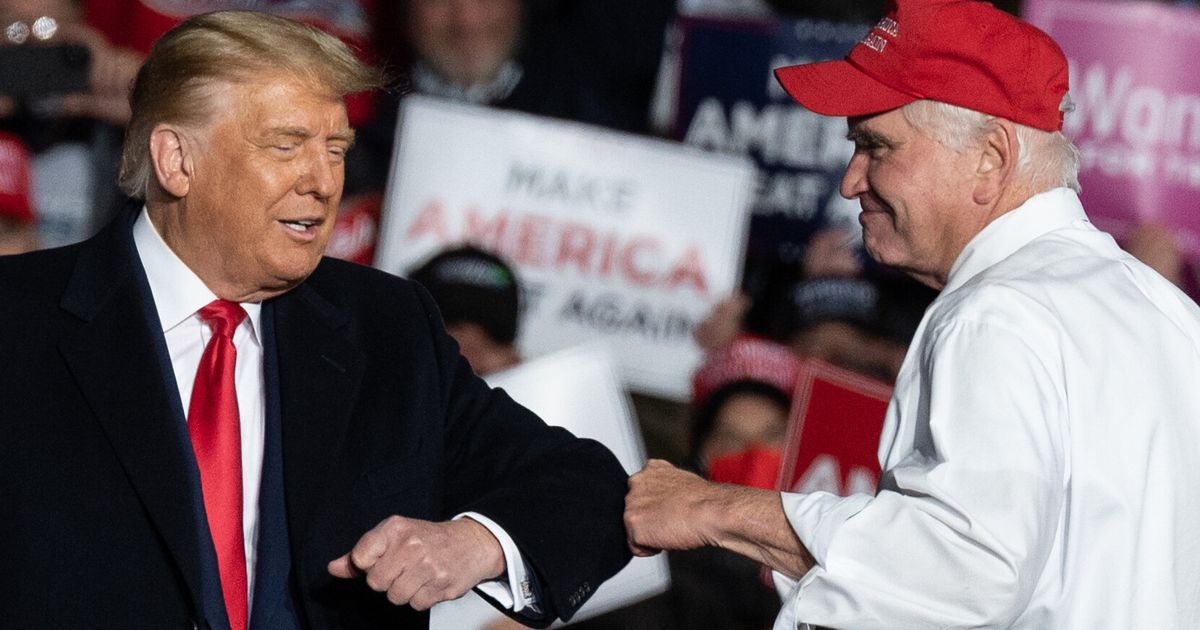 Rep. Mike Kelly (R-Pa.) expressed outrage at the imprisonment of people convicted of crimes related to the U.S. Capitol riot on Jan. 6, 2021, in a Thursday night debate with his Democratic challenger, Dan Pastore.

Asked by the WICU Erie News Now debate moderators how he felt about the deliberations of the House select committee investigating the riot’s causes and calls for the committee to subpoena former President Donald Trump, Kelly characterized it as a partisan witch hunt and emphasized his anger with the law enforcement response to the riot.

“Should it have happened? Absolutely not,” Kelly said of the attack on the Capitol. “The relentless pursuit of this president, regardless of any information that’s gathered, should be shocking to any person that lives in this country.”

Kelly correctly noted in the debate that there are only two Republicans on the Jan. 6 committee ― Reps. Liz Cheney (Wyo.) and Adam Kinzinger (Ill.) ― and that both are longtime Trump critics. He did not mention, however, that the committee exists in its current form because House Republican Leader Kevin McCarthy (Calif.) rejected the idea of a fully independent and bipartisan commission.

“The vast majority of witnesses in those hearings were either Capitol police or actually Republicans,” replied Pastore, a businessman and attorney. “What does he propose? That we simply brush it under the carpet?”

“It’s important that we get to the bottom of it, and that’s what we’re trying to do in the Jan. 6 hearings,” Pastore added.

At another point in the debate, Kelly elaborated on his loss of faith in the federal government.

“Where we are right now, right now as a nation, is the most dangerous point we’ve ever been, where we are being overtaken by that same government whose justice system has failed,” he said. “The FBI is now looked at as a danger by most people.”

Kelly is one of the 147 House Republicans that voted against certifying the 2020 presidential election results later in the day following the Capitol riot. He had previously sued to invalidate Pennsylvania’s 2.5 million ballots on the grounds that the GOP-controlled state legislature’s passage of no-excuse absentee voting violated Pennsylvania’s constitution. The Pennsylvania Supreme Court, which has a Democratic majority, dismissed the lawsuit in November 2020.

Pastore pressed Kelly later on to clarify whether he still believes the 2020 presidential election was “stolen” from Trump.

Kelly declined to provide a straight answer, emphasizing instead his continued skepticism of the fairness with which it was administered.

Pastore heaped additional condemnation on Kelly in a Friday statement provided to HuffPost, calling Kelly an “embarrassment to Western Pennsylvania.”

“His comments demonstrate that he is unfit to serve in public office,” Pastore said. “I am running for Congress to uphold the law of the land and to support law enforcement. Mike Kelly stands with violent criminals and attacks the men and women of law enforcement who keep us safe.”

“Mike Kelly thinks it’s unfair that violent criminals who attacked the police and tried to overthrow our government are serving time in prison, and that is outrageous,” he added. “Kelly’s attack on federal law enforcement shows that he has no respect for the law and those who protect us.”

Kelly, a six-term incumbent, is the heavy favorite to win reelection in Pennsylvania’s 16th Congressional District, which covers the northwest corner of the Keystone State. In 2020, Trump defeated President Joe Biden among the district’s voters by more than 20 percentage points.

Pastore’s struggle to raise large sums of money has prevented him from advertising on television thus far in the race.